Growth-Starved Utilities Have Found a New Way of Making Money

American Electric Power Co. is using it for a $4.5 billion deal that’ll land the U.S. utility owner a massive wind farm in Oklahoma and a high-voltage transmission line to deliver the power. NextEra Energy Inc.’s Florida unit is using it to build solar farms. And in April, the chief executive officer of Xcel Energy Inc. said he’d use it to help add 3.4 gigawatts of new wind energy over the next five years. 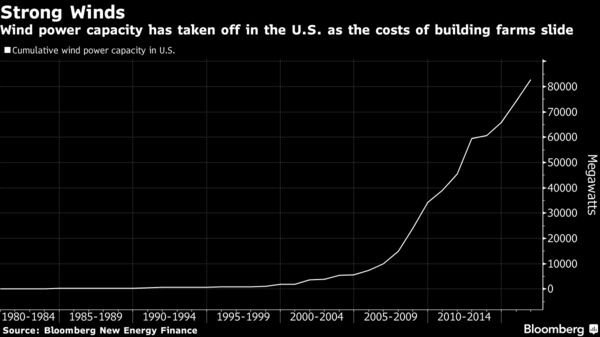 Here’s how it works: Some utilities that for years contracted to buy electricity from wind and solar farm owners are now shifting away from these so-called power purchase agreements, or PPAs. They’re instead seeking approval from state regulators to buy the assets outright and recover the costs from customers through rates. While the takeovers are being branded as a cheaper way of securing power, saving ratepayers millions in the end, they also guarantee profits for utilities.

“We keep wondering why utilities are always signing PPAs that pass the cost through to customers,” said Amy Grace, an analyst at Bloomberg New Energy Finance. “If you put it in your rate base, you can get a guaranteed return on it. There’s a big upside to ownership.”

With the cost of building solar and wind farms sliding and electricity demand weakening, owning renewables is a more attractive proposition than ever for utilities.

“The price of wind has come down enough that it’s going to be competitive with anything else you’re probably going to propose to build out there,” Kit Konolige, a New York-based utility analyst for Bloomberg Intelligence, said by phone Wednesday.

The catch, of course, is regulatory buy-in. AEP will need approval from Arkansas, Louisiana, Oklahoma, Texas and federal regulators to purchase the 2,000-megawatt Wind Catcher farm from developer Invenergy LLC, build a 350-mile (563-kilometer) transmission line and bake the costs into customer rates. The company expects to file these plans with regulators on July 31.

Benjamin Fowke, chief executive officer of Minneapolis-based Xcel Energy, said in April that the company would seek approval to add 3.4 gigawatts of new wind energy and bill customers for as much as 80 percent of that investment through rates. He said at the time that wind energy is now the cheapest new form of generation.

NextEra has already gotten Florida’s go-ahead to recover the costs of the solar farms its Florida utility is building through customer rates.

Should AEP gain similar approvals, the utility will be embarking on its most expensive renewable energy project yet, underscoring a dramatic shift in America’s power mix. Once the largest consumer of coal in the U.S., AEP is now shuttering money-losing plants burning the fuel and diversifying its resources along with the rest of the utility sector.

The Wind Catcher farm in Oklahoma is set to become the largest wind farm in the nation and the second-biggest in the world, according Invenergy.

AEP estimated that the low cost of the wind power will save customers $7 billion over 25 years. Construction on the farm began in 2016, and the plant is scheduled to go into service in mid-2020, Invenergy said by email.