President Donald Trump took office vowing to revive the coal industry’s fortunes. So far, the smart money has been on clean energy.

An index of 40 publicly-traded solar companies, wind-turbine component makers and others that benefit from reduced fossil fuel consumption is up 20 percent this year. That’s more than double the S&P 500’s 9.8 percent gain. And better than the 8.3 percent rise by an index of leading coal companies.

The eco-friendly stock rally — which comes as oil and natural gas-focused shares have dipped — stems from a constellation of factors, including a Nevada law to boost rooftop solar, China’s mass-transit policy and optimism that Elon Musk’s Tesla Inc. might deliver its Model 3 sedan on time. In short, Trump’s pro-fossil fuel agenda hasn’t damaged investor support for clean energy. 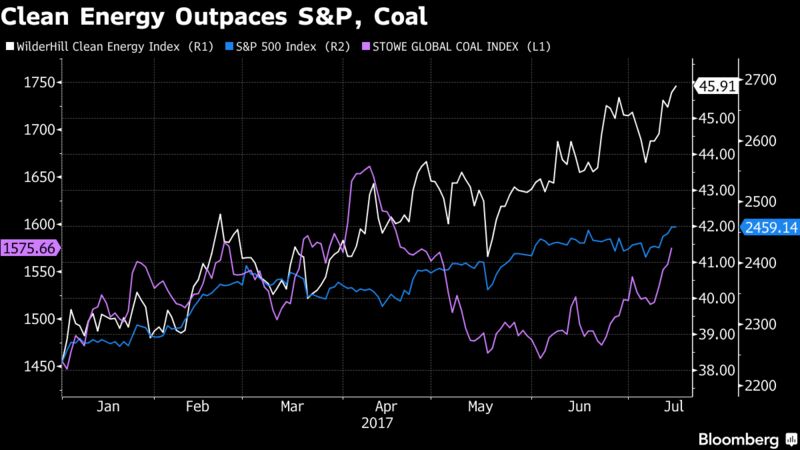 As clean-energy stocks climb, investors have pumped more money into wind and solar. U.S. investments totaled $14.7 billion during April, May and June, up 51 percent from the previous quarter to mark the highest level since 2015, according to Bloomberg New Energy Finance. European investments rose 10 percent, to $8.8 billion.

“We are seeing catalysts for these markets driven by the fact that people increasingly realize clean energy is more profitable than conventional energy,” said David Richardson, an executive director at Impax Asset Management, which focuses on sustainability and has about $8.7 billion under management, up 32 percent this year.

Solar stocks are performing especially well under Trump. Sunrun Inc., the largest independent U.S. rooftop panel installer, is up 32 percent, closing Monday at $7.01. That rally has been fueled in part by a Nevada law passed in June to make solar more affordable for the state’s homeowners. Nevada gets more sunshine than almost anywhere in the nation, but it’s been a dead-zone for solar since regulators slashed rooftop panel subsidies in 2015. The new legislation largely restored those credits.

Solar manufacturers are rallying, too. First Solar Inc., the largest American panel maker, has gained 33 percent, to $42.72. Average panel prices, which plunged 35 percent last year, have begun to stabilize, falling just 8 percent since December, to 33 cents per watt. The market shift stems from solar developers aggressively stocking up on panels, fearing that a pending federal trade case could lead to tariffs on imported equipment.

“It created some tailwind for the manufacturers,” said Sophie Karp, an analyst at Guggenheim Securities 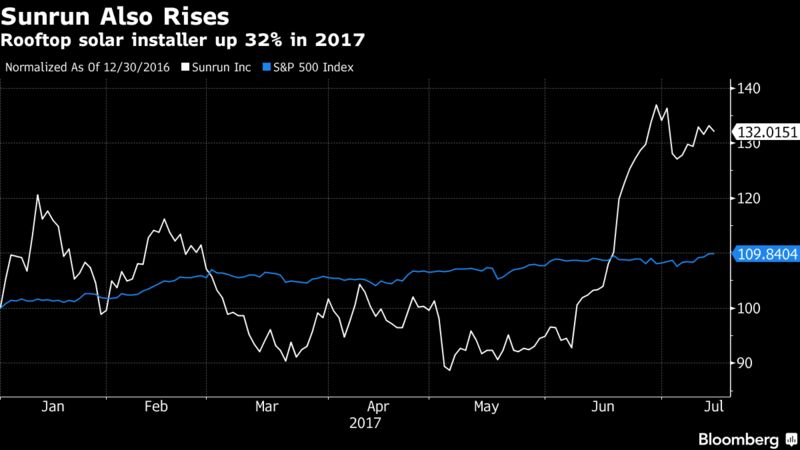 Some of the biggest clean-energy gainers include fuel cell manufacturers, which use liquid hydrogen to generate electricity through a chemical process that emits only water. While hydrogen-powered engines have been slow to catch on in cars — largely because of a lack of fueling stations — China has been pushing to use the technology in buses.

As Beijing has beefed up investments this year, fuel cell maker Hydrogenics Corp. has nearly doubled, to $8.70. Ballard Power Systems Inc. is up 73 percent, to $2.86.

Electric car maker Tesla is up 50 percent this year as the company has begun limited production of its Model 3 sedan, its cheapest vehicle yet. Musk says he expects production to reach 20,000 cars a month by December.

In the end, some of the clean-energy gains may be fleeting. The trade case that’s driving up solar panel prices may ultimately lead to tariffs that analysts warn could slow overall demand. Fuel cell companies have a long history of ephemeral rallies. And Tesla’s stock has been slipping since its June 23 peak after a troubling quarterly sales report and ongoing concern about its ability to mass produce. It closed down 2.5 percent Monday, at $319.57.