Coal and gas to stay cheap, but renewables still win race on costs

London and New York, 13 June 2016 – Low prices for coal and gas are likely to persist, but will fail to prevent a fundamental transformation of the world electricity system over coming decades towards renewable sources such as wind and solar, and towards balancing options such as batteries.

The latest long-term forecast from Bloomberg New Energy Finance, entitled New Energy Outlook 2016, charts a significantly lower track for global coal, gas and oil prices than did the equivalent projection a year ago. Crucially, however, it also shows a steeper decline for wind and solar costs.

The forecast, covering the 2016-40 period, has mixed news on carbon emissions. Weaker GDP growth in China and a rebalancing of its economy will mean emissions there peak as early as 2025. However, rising coal-fired generation in India and other Asian emerging markets indicate that the global emissions figure in 2040 will still be some 700 megatonnes, or 5%, above 2015 levels.

Seb Henbest, head of Europe, Middle East and Africa for BNEF, and lead author of NEO 2016, commented: “Some $7.8 trillion will be invested globally in renewables between 2016 and 2040, two thirds of the investment in all power generating capacity, but it would require trillions more to bring world emissions onto a track compatible with the United Nations 2°C climate target.”

Jon Moore, chief executive of Bloomberg New Energy Finance, said: “The New Energy Outlook incorporates a significantly lower trajectory for coal and gas prices than the 2015 edition did a year ago but, strikingly, still shows rapid transition towards clean power over the next 25 years.”

Elena Giannakopoulou, senior energy economist on the NEO 2016 project, added: “One conclusion that may surprise is that our forecast shows no golden age for gas, except in North America. As a global generation source, gas will be overtaken by renewables in 2027. It will be 2037 before renewables overtake coal.” 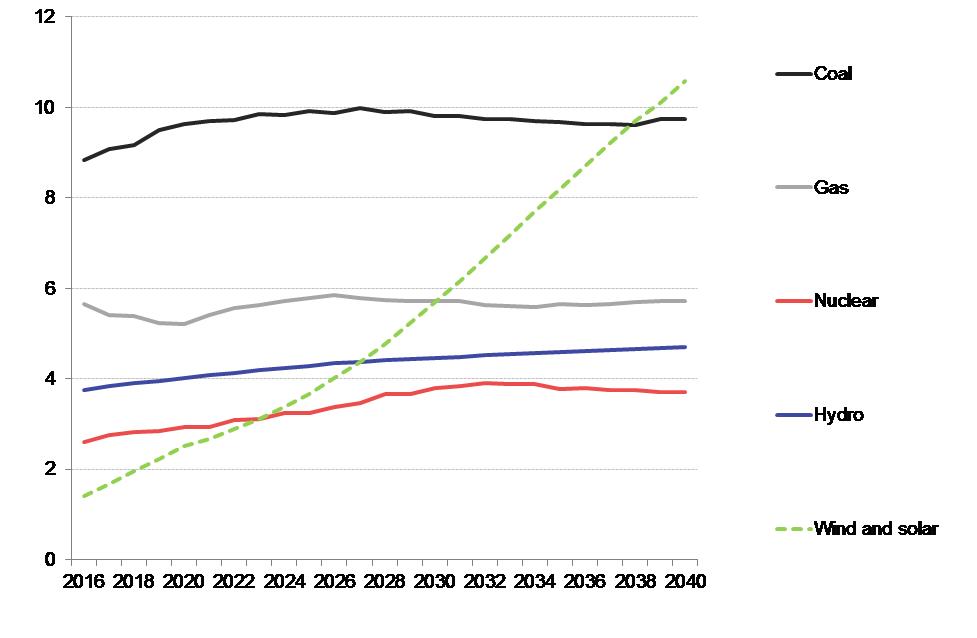 The outlook for coal is crucial for international ambitions on climate. The Paris conference last December saw 196 nations agree limit global warming to “well below” two degrees Centigrade, and to aim to reach “global peaking of emissions as soon as possible”. NEO 2016 indicates that, despite the global move towards renewables, power sector emissions will not peak for another 11 years.

NEO 2016 is based on a combination of the project pipeline in each country, current policies, plus modelled paths for future electricity demand, power system dynamics and technology costs. It does not assume any further policy measures post-2020, to speed up decarbonisation. Some 65 specialist analysts worked on the forecast.

An executive summary of NEO 2016 can be downloaded by the media from the micro-site on this link.