China Is the Growth Engine of World’s Low-Carbon Spending

China has cemented its position as the leading country for investment in the energy transition, according to our 2022 Energy Transition Investment Trends Report. It spent $266 billion on the deployment of low-carbon technologies in 2021, accounting for more than a third of the record global total of $755 billion.

Investment in the energy transition reflects spending on projects, such as renewables and charging infrastructure, as well as end-user purchases of low-carbon energy devices, such as zero-emission vehicles. 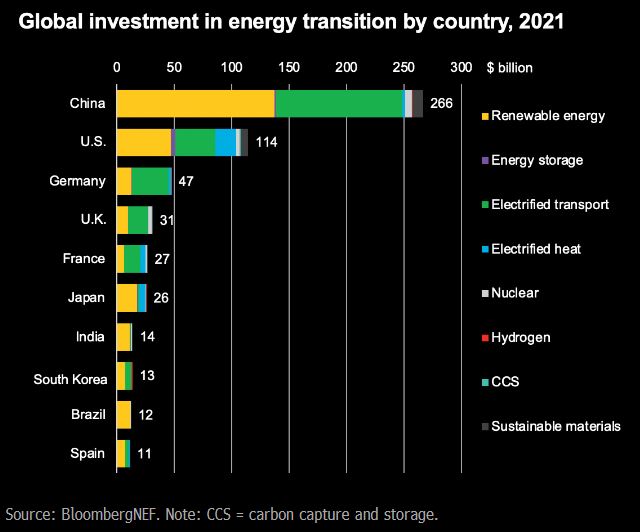 Energy transition investment in China leapt by 60% last year. Over $137 billion was ploughed into renewable energy, with growth largely driven by a surge of investments in large- and small-scale solar projects. China also reclaimed its crown from Europe as the global leader in electric vehicle (EV) investment. Overall, it spent $110 billion on the electrified transport sector.

The U.S. was the second-biggest investing country once again in 2021. Its energy transition spending increased by 17% year-on-year to $114 billion. Investment in EVs jumped by almost 90% to $35 billion, reflecting a more than doubling of passenger EV sales to around 652,000 units. 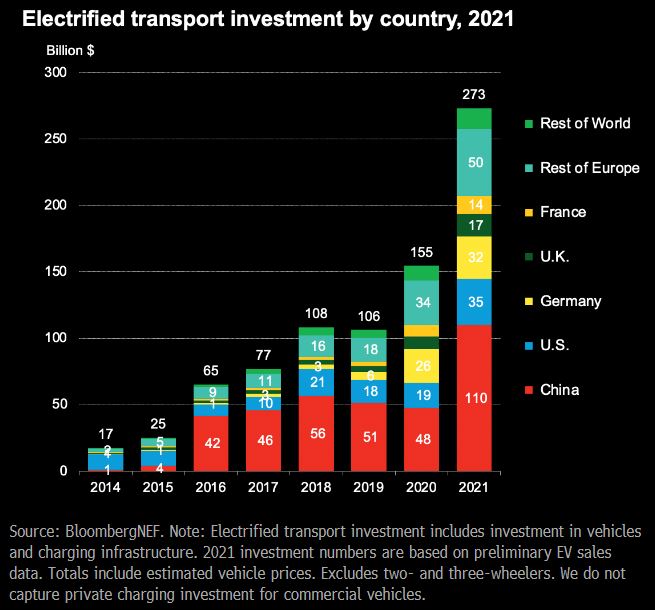 European countries invested $219 billion in the energy transition last year, with European Union member states accounting for $185 billion of the total. Four countries in Europe remained in the global top 10, with Germany, the U.K., France and Spain all exceeding $10 billion in low-carbon spending in 2021.

Japan’s transition investment fell slightly to $26 billion, causing it to slip two places to sixth in the global ranking. This allowed the U.K. and France to each move one step up the pecking order. Meanwhile, India and South Korea entered the top 10 in 2021, at the expense of Norway and the Netherlands.

For more detail on these findings, an abridged version of the 2022 Energy Transition Investment Trends Report can be downloaded from this page. BNEF subscribers can find the full report on the client website and on the Bloomberg Terminal.