Improving an aircraft’s fuel efficiency is one of the cornerstones behind the aviation industry’s efforts to reduce emissions of carbon dioxide. With many of the world’s biggest airlines now renewing their fleets with more efficient craft, gains are likely to be seen. For the industry to truly achieve its ambitious emissions goals, however, more innovations will be needed.

BloombergNEF expects average fuel efficiency of the global aircraft fleet to continue to improve this decade primarily with existing technologies. In the long term, however, disruptive technologies will be needed if airlines are to meet their net-zero emissions targets between 2040 and 2050. 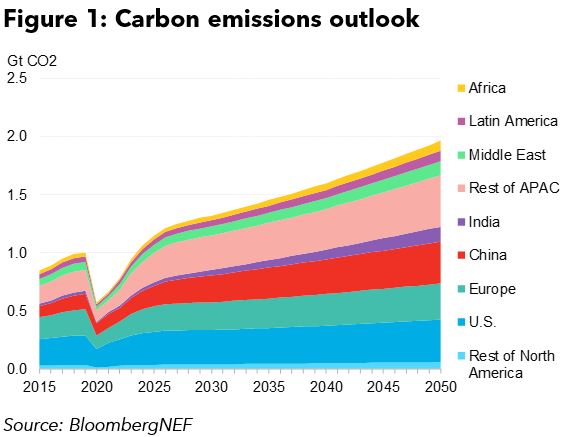 Fuel economy will improve this decade based on existing technologies

The aviation sector’s fuel efficiency is measured by the amount of jet fuel burned per passenger or seat. With fuel accounting for 30% of an airline’s operating costs, fuel efficiency has a direct bearing on profitability.

The global average fuel economy improved at over 2% annually from 1990-2019. Once air travel demand recovers from the impact of the Covid-19 pandemic, it will continue to improve primarily based on existing technologies.

The Airbus A320neo and the Boeing B787 series use novel engines that burn less fuel, like Pratt & Whitney’s geared turbofan, wingtip devices to reduce drag, and a higher share of carbon-fiber reinforced plastics (CFRP) to reduce weight. Boeing’s B777X, a new variant with long retractable wings to generate more lift, is scheduled to begin operating in 2024. Airlines such as Emirates Airline, Qatar Airways, and Singapore Airlines have ordered a total of 334 of the B777X. In general, new generation aircraft can consume 15-20% less fuel per seat than their predecessors.

Technology is not the only driver for fuel economy improvements. Aging planes, reaching a typical 20-25 year lifetime, and pressure to reduce CO2 emissions are driving fleet renewals. BNEF’s Aircraft Technology Outlook: Fuel Efficiency report found that nearly 14,000 narrowbody and widebody aircraft are set to be delivered from 2022 onwards, at least 34% of which are likely to be delivered by 2025. The total aircraft fleet that is active, under maintenance or repair is about 21,400 as of May 19, 2022, according to data sourced from ch-aviation.

In addition, increasing total carbon costs that European Union-based airlines must bear are likely to send a strong signal to invest in CO2-reducing technologies, including more fuel-efficient aircraft. BNEF’s 1H 2022 EU ETS Market Outlook expects the price of carbon in the EU’s emissions trading scheme to rise to 136 euros per metric ton by 2030 from an average price of 80 euros in December 2021. 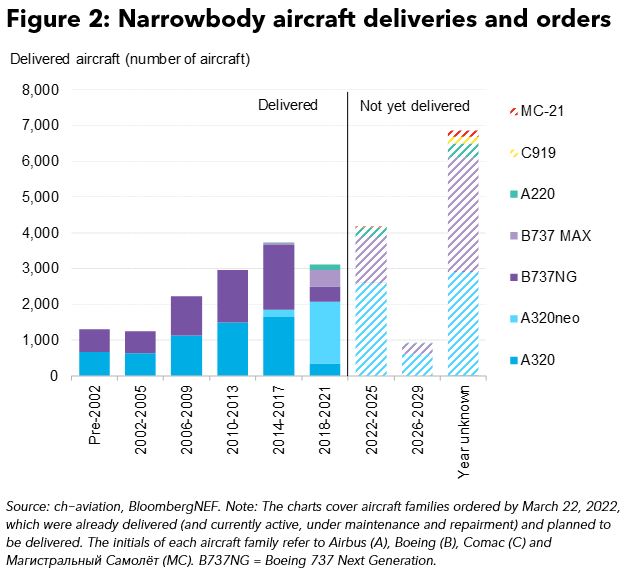 Beyond 2030: A big window of opportunity for aircraft renewal

A total of about 12,500 narrowbody and widebody aircraft will reach 20 years of age between 2030 and 2040, marking a time when many airlines may boost investment in fleet renewal. The peak for such purchases could come around the late 2030s. By then, the aviation sector may need disruptive technologies such as the open rotor engine, which is under development by CFM International, and novel aircraft designs such as strut-braced wing aircraft, to achieve double-digit improvements in fuel efficiency.

At that time, conventional tube-and-wing aircraft will have a smaller margin for large fuel efficiency improvements. Such technology improvements are also critical because most aircraft introduced in the 2030s are likely to continue flying in 2050, when the airline industry aims for net-zero CO2 emissions. Neither Airbus or Boeing have announced new aircraft development programs, other than Airbus’ hydrogen-powered aircraft concepts. 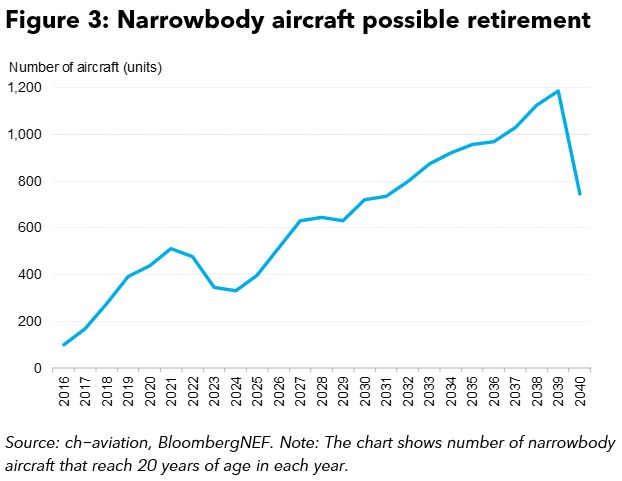 Zero-emission aircraft and new sustainable aviation fuel (SAF) production technologies will be the most critical for emissions abatement in aviation in the long term. However, investment in companies working on these two pathways accounts for only a small fraction of funds directed to low-carbon aviation startups.

Out of the $7.5 billion raised from 2017 to the first quarter this year, 65% went into urban air mobility or last-mile delivery companies, which are likely to add to air travel demand rather than tackle the bulk of the sector’s emissions. BNEF believes a rapid scale up of investment is required in hydrogen-powered and electric aircraft, and SAF to nurture technology development at faster speeds. 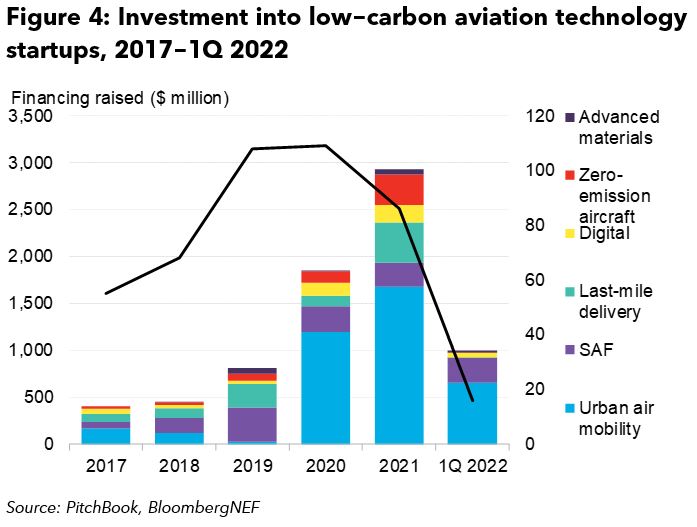