Why the Prospect of ‘Peak Oil’ Is Hotly Debated

The world is turning its back on oil. But how quickly? Technological advances driven by the threat of climate change could mean the world’s thirst for petroleum tops out sooner than companies such as Exxon Mobil Corp. or giant producers like Saudi Arabia are banking on. “Peak oil” has been debated for decades, but today it means something very different.

About 60 percent of oil is used in transportation, which is also where the biggest technological changes are emerging. The impact of electric carmakers such as Tesla Inc. could be turbocharged by advances in related fields such as self-driving vehicles and ride-hailing apps, which make it possible for people to switch from owning cars to relying on rides from more efficient fleets. The culmination of these trends could transform how people travel and prompt more revisions to forecasts for when oil consumption will peak. 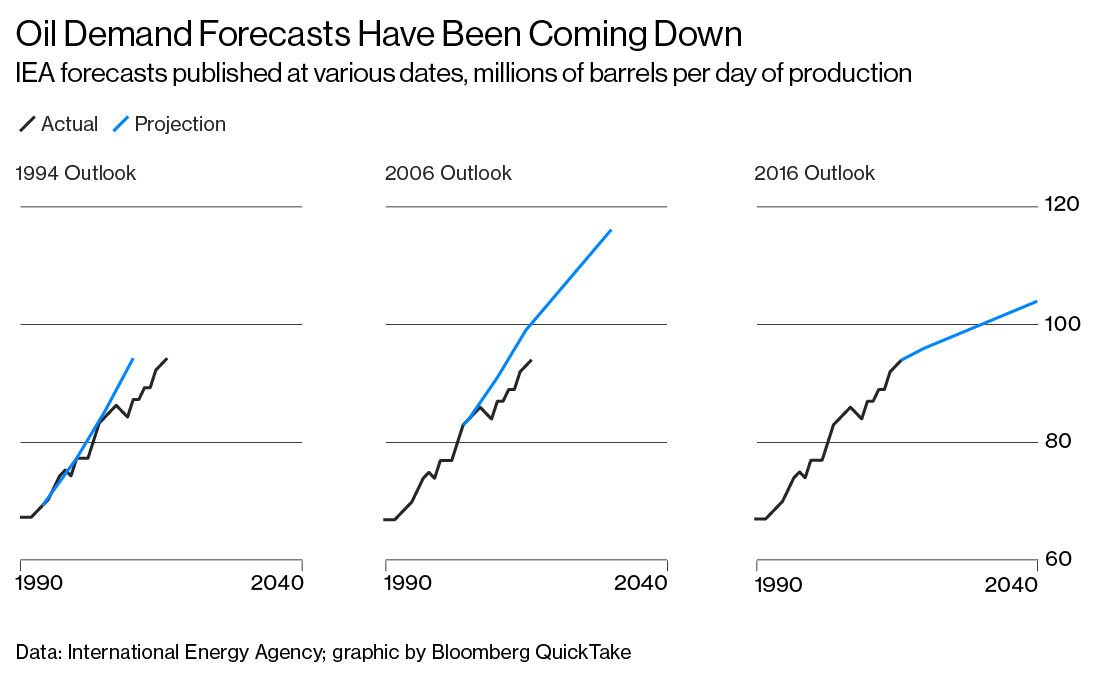 2. Is the world running out of oil?

No. The peak oil that’s talked about today is quite different from the concept that emerged in the 1950s, when M. King Hubbert, a Royal Dutch Shell Plc geologist, predicted that U.S. oil production would crest in the 1970s and the world would physically run out of oil. That never happened, and new discoveries and efficiency gains at existing fields mean oil supplies will abound for a long time to come. So the discussion has shifted to peak demand — whether people will simply use less petroleum and reserves that are considered valuable assets today will wind up being left in the ground.

3. What do experts say about that?

Forecasts for long-term oil demand have been coming down. The International Energy Agency, which advises rich countries on policies, has been steadily revising its predictions lower over the past 20 years as renewable energy has taken off and more power utilities have switched to cleaner-burning natural gas. Solar power, for example, has picked up steam as its cost tumbled much faster than expected, with prices falling 50 percent since 2009. That’s already upending the business model of utilities, which were designed to deliver fossil-fuel energy from large power plants to homes and businesses. 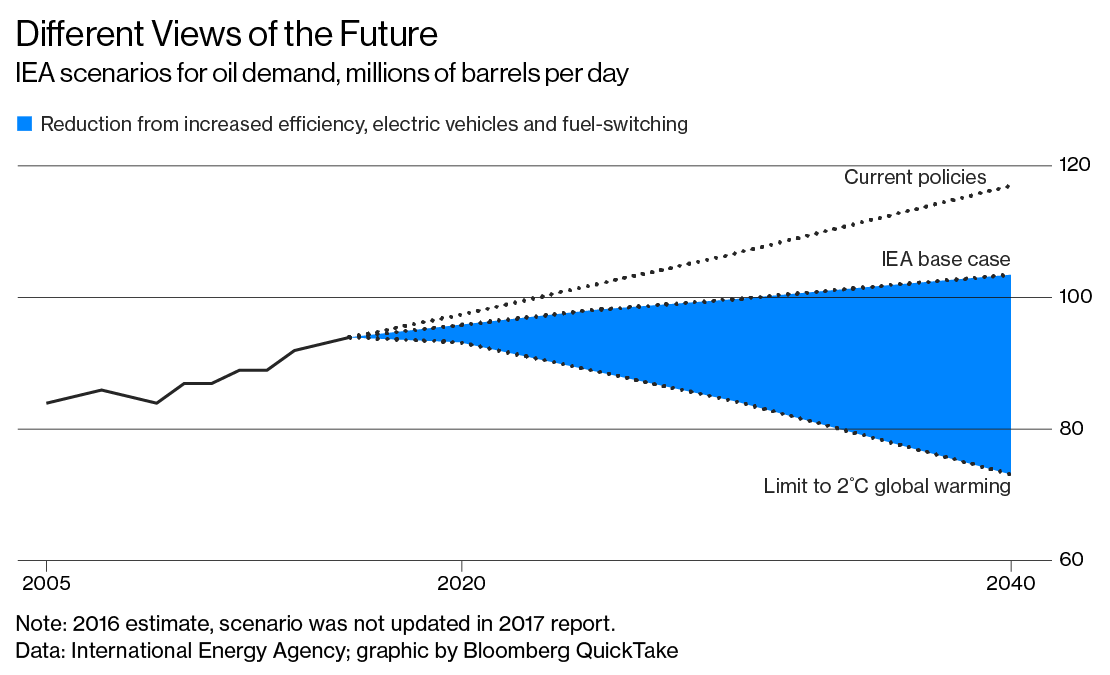 4. Is oil usage still a threat to global warming?

Yes. To limit global warming to “well below” 2 degrees Celsius (3.6 degrees Fahrenheit) — the target set by the United Nations-sponsored climate change treaty — the IEA predicted in 2016 that demand for oil would need to peak in the next few years. That’s unlikely to happen: The agency’s main demand scenario still sees oil use expanding for the next two decades.

5. So when will demand for oil peak?

There’s a range of about 25 years between the earliest and latest predictions. The most aggressive ones are based on the rapid expansion of electric vehicles, energy efficiency improvements and policy changes to curb greenhouse gas pollution. That scenario leads Statoil ASA and some forecasters to predict that oil demand could peak as soon as the late 2020s. Ben van Beurden, Shell’s chief executive, has said that if electric cars become really popular, the zenith could arrive in the next 15 years. 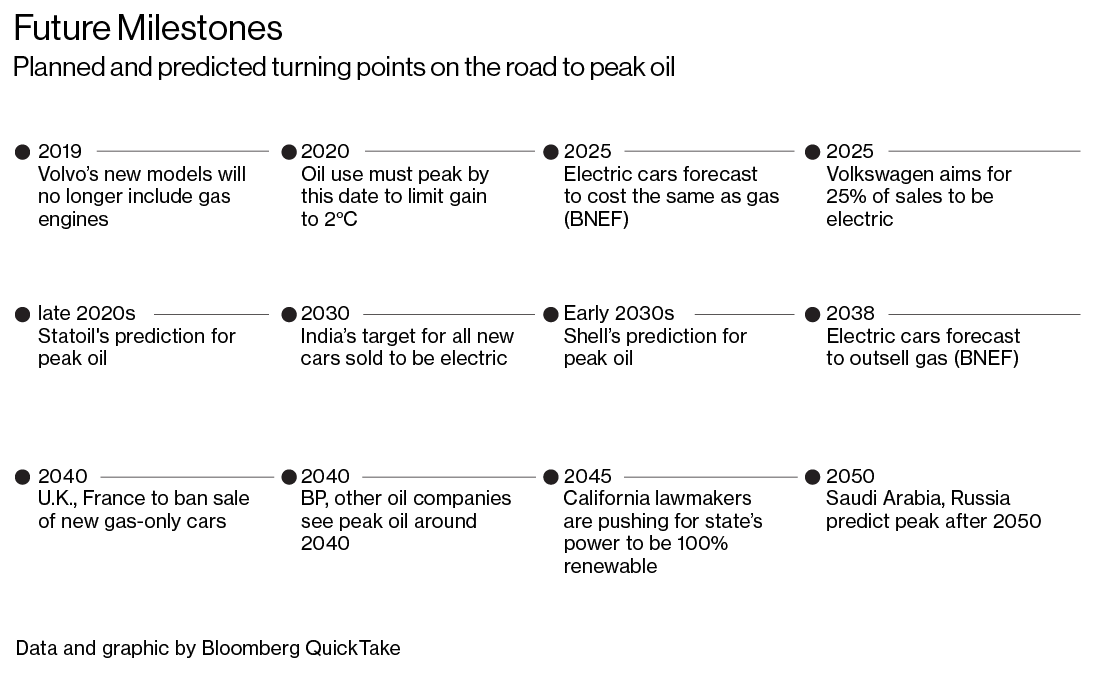 6. Do all oil companies have the same view?

No. Most oil companies see a peak around 2040. Others say their industry will enjoy decades of growth as it feeds the energy needs of the world’s expanding middle class. Saudi Arabia and Russia, the world’s two largest exporters, don’t foresee a top until 2050 at the earliest. Even when production does peak, it’s likely to lead to a plateau rather than a steep fall.

7. Why such differences in forecasting?

There’s a lively debate about how rapidly electric vehicles will catch on. Falling costs for batteries could make them as affordable as internal combustion engine cars over the next 10 years, according to Bloomberg New Energy Finance. Meanwhile, some of the world’s largest auto markets plan to phase out vehicles powered by fossil fuels to clean up dirty air. By 2030, India wants all new vehicles sold to be electric; the U.K. and France will ban the sale of diesel- and gasoline-fueled cars by 2040. The impact of the U.S. is a wild card because President Donald Trump is disrupting efforts to tackle global warming.

8. What will become of oil companies?

Many are speeding up efforts to diversify, investing more in natural gas and cleaner technologies such as hydrogen fuel cells. Even now these companies are doing huge business turning crude into chemicals used for everything from plastics to fertilizer. Still, peak oil has to be a concern, since it can take a decade or more for multibillion-dollar oil exploration projects to come to fruition.

9. What will happen to car companies?

They are furiously preparing for the shift. Volvo said all its new models will include electric drive by 2019, while Volkswagen wants 25 percent of its sales to be electric by 2025. Daimler and BMW are aiming for 15 percent to 25 percent by 2025.

10. What happens to countries that depend on oil revenue?

That’s a big unknown. Peak oil could cause political turmoil in so-called petro-states, which rely on oil revenue to keep government finances afloat. Saudi Arabia plans a partial privatization of its state oil company, Aramco, to raise funds to diversify its economy for the post-hydrocarbon age. Other petro-states, such as Russia, Venezuela and Nigeria, have yet to lay out plans for the future.