Traders Think Hedge Funds Are Missing a Trick With Oil

“The market is looking a bit better,” Ian Taylor, chief executive officer of Vitol Group, the world’s largest oil trader, said in an interview. “Physical differentials are improving across the world.”

Differentials are an important indicator of the state of the market. They reflect the price of each type of crude compared with a benchmark, often Brent or West Texas Intermediate. The narrower the discount — or larger the premium — the stronger the market for that particular grade.

Price differentials for some important varieties of crude, including Russia’s top export Urals, are at the strongest levels in three years, according to data compiled by Bloomberg. That would be encouraging for Saudi Arabia and its allies, if the hedge funds were paying attention.

“The improvement in physical markets is being ignored in the financial space,” said Amrita Sen, chief oil analyst at Energy Aspects Ltd., a London-based consultant. “In other words, even though physical differentials are strengthening, headline price is range-bound at best.”

The emerging tightness in the physical market helped Brent to move briefly above $50 a barrel last week, but prices were back below $49 again on Monday. Even as Saudi Arabia promised deep cuts in shipments at a meeting of producers in St. Petersburg, Russia on Monday, signs of growing production from Libya and Nigeria — exempt from the output curbs — kept a lid on prices. 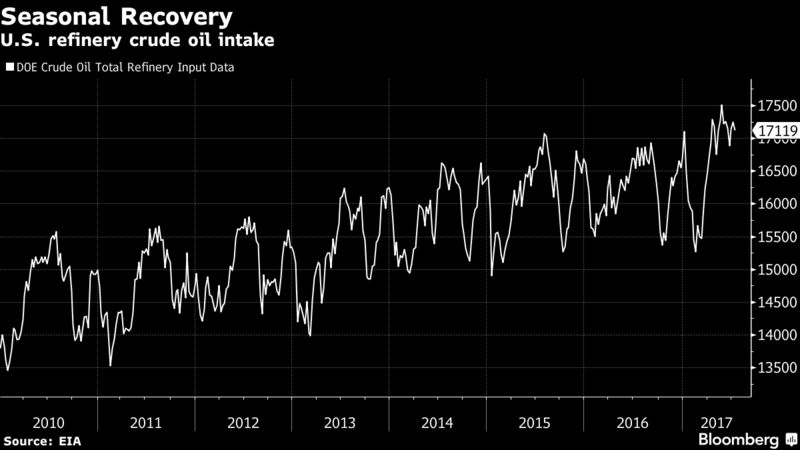 However, the tightening also reflects more enduring factors: after a weak start of the year, global oil demand growth is strengthening. The IEA forecasts annual consumption to climb 1.6 million barrels a day in the third quarter from a year earlier, compared with just 1 million barrels a day in the first. And the OPEC output cuts, even if faltering, are slowly biting in some corners of the market.

The improvement in the physical market is more marked for lower-quality heavy, sour crude — which has a higher-sulfur content — than for light, sweet oil. The Organization of Petroleum Exporting Countries pumps mostly sour crude, so its production cuts have hit that corner of the market disproportionately. The strength of those prices has nonetheless supported sweeter grades.

In Europe, Urals crude was 65 cents a barrel cheaper than Brent this month, the narrowest discount in almost three years, according to data compiled by Bloomberg. In April, the discount was about $2.

In the Americas, Colombian crude Vasconia is quoted at $3 a barrel under WTI, the narrowest discount in four years, and half the $6 differential in January. Oriente crude, pumped by OPEC member Ecuador, is trading at a discount of $5 a barrel to WTI, the narrowest since 2013. 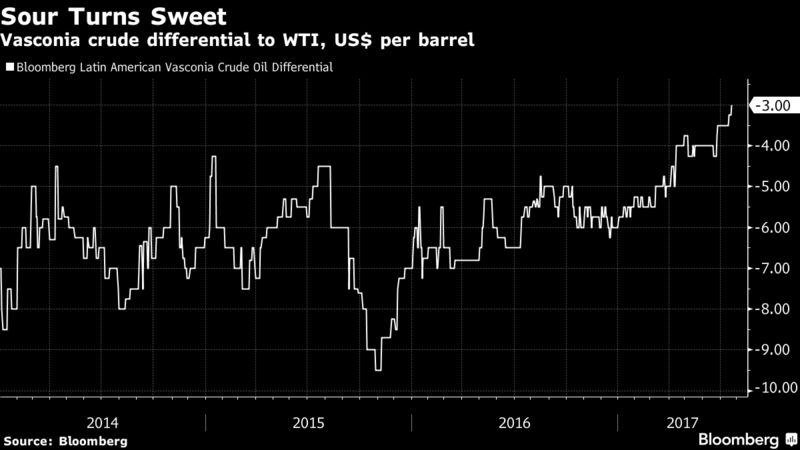 In Asia and the Middle East, Basrah Heavy, a low-quality grade from southern Iraq, is priced at $4.45 a barrel under the benchmark Dubai, the strongest pricing since the country started exporting it in June 2015.

In the world of sweet crude, differentials for certain oil grades have also improved, despite competition from rising American shale output.

In the U.S., Light Louisiana Sweet traded at a premium of $2.55 a barrel above WTI, the strongest since March 2016, as it benefits from outages in Canada. A year ago, that grade traded at a premium of just $1.30 a barrel. In the Mediterranean, buyers are showing they’re willing to pay 40 cents below Brent for Kazakh CPC crude, the narrowest discount since November.

The physical market will face a test after the summer. By October, crude refinery intake will drop to about 79.9 million barrels a day as plants undergo seasonal maintenance. That’s 1.5 million barrels a day below the peak in August, equivalent to the production of OPEC members Libya and Ecuador combined.

If crude differentials remain strong by then, it would be a sign that OPEC has succeeded in re-balancing the market.