Blockchain is upending the world’s financial markets with the rise of bitcoin, and now the digital-ledger system is poised to do the same next year for raw materials like food and energy.

Companies including BP Plc, ABN Amro Group NV and Mercuria Energy Group Ltd. said last month they will adapt blockchain to streamline physical energy transactions. In October, four banks joined a venture started by UBS Group AG and International Business Machines Corp. to use the technology in a platform for the global goods trade. Natixis SA and Trafigura Group Ltd. announced in March they will employ the system to finance buying and selling oil.

“We’re talking about this massive change in the way that business is being done,” said Eric Ervin, the chief executive officer of Reality Shares Inc., a San Diego fund manager that created an index to track returns of companies adopting the technology. “Everything happens automatically, without a bunch of paperwork, processing and transferring.”

Blockchain is an online ledger that records transactions using encryption to ensure security while allowing a network of users to verify them. The most-prominent use was in bitcoin, which became a global sensation in 2017. Over the past year, as investors became more comfortable with how bitcoins and ledger systems work, the price of the cryptocurrency has surged more than 2,000 percent and touched a record this month of $17,578.45.

Further reading: BNEF’s report on ‘Applications for Blockchain in the Energy and Transport Industries’. 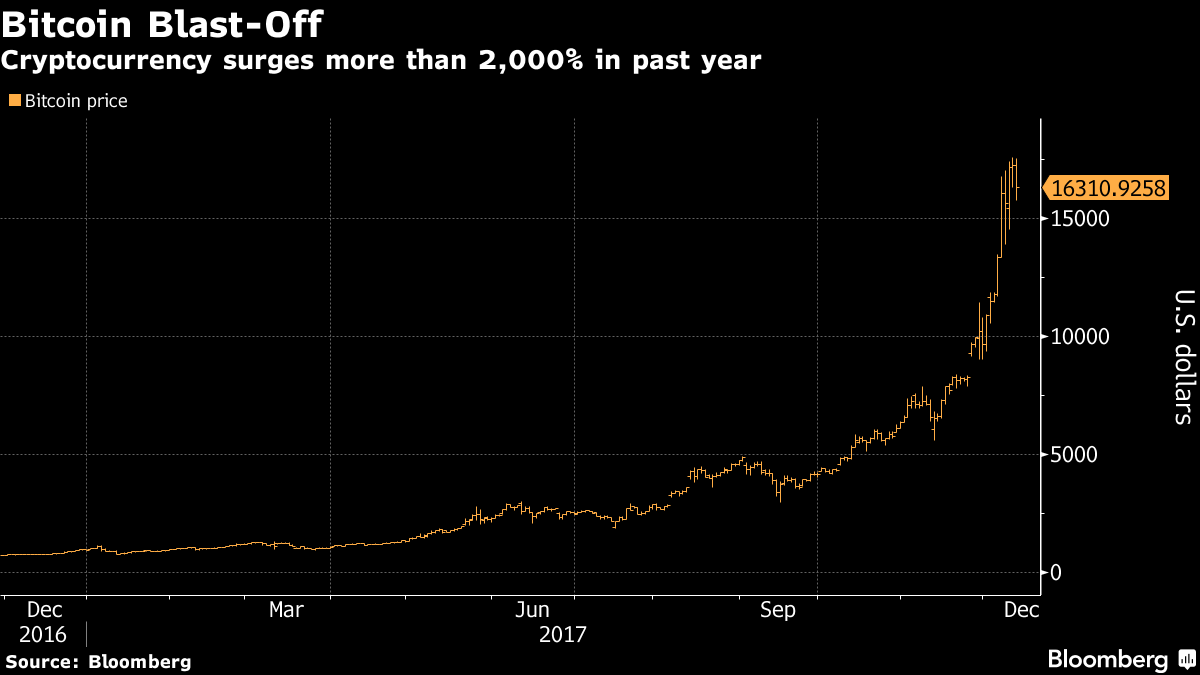 While the bitcoin market relies on blockchain to transmit and store the value of each token, the transparent tracking technology has “much greater potential” across businesses that increasingly need to store and exchange massive amounts of data, Bloomberg New Energy Finance said in a Sept. 12 report.

Farmers already see the possibilities. The government of Ukraine said in October it will use blockchain technology to manage its registry of crop land because the current systems is vulnerable to fraud that leads to ownership disputes. In sub-Saharan Africa, a fertilizer company and an exchange owner are using the technology to develop an agricultural commodity platform.

The technology is a big selling point for the global food industry to identify counterfeit ingredients and to trace the source of contamination during product recalls. Michigan State University estimated fraud costs the global food industry as much as $40 billion a year. In August, IBM said it’s working with a group of companies including Wal-Mart Stores Inc., Nestle SA, Tyson Foods Inc., Unilever NV and McCormick & Co. to identify ways they can incorporate blockchain.

In most food-supply chains, “it might take weeks to figure out where it went from source to destination,” and in some cases, the source may not be known, Arvind Krishna, IBM director of research, said at a Dec. 5 technology conference in Park City, Utah. “On a blockchain, it takes just seconds.”

More are joining in. JD.com Inc., China’s second-largest e-commerce platform, Wal-Mart, IBM and Tsinghua University said Thursday they’ll work together to create a blockchain-based system for collecting data about the origin, safety and authenticity of food.

De Beers is investing in a blockchain platform that traces the origin of diamonds in a bid to boost confidence in an industry that has been marred by the sale of gems from war zones.

“Now more than ever, consumers expect to know more about their luxury goods, the route they have traveled, their authenticity, and whether they have been a force for good in the world,” Bruce Cleaver, chief executive officer of De Beers, said in a blog post on the company’s website.

Blockchain also is becoming a key tool for shipping companies. AP Moller-Maersk A/S in March disclosed a ledger system with IBM that will help manage and track the paper trail of tens of millions of shipping containers. About $16 trillion of physical raw materials are transported around the planet each year, and better tracking offers the promise of big reductions in record-keeping costs. Current spending on documentation alone accounts for 7 percent of global trade, according to the Global Alliance for Trade Facilitation.

Still, widespread adoption of blockchain systems may take a while because the transition to new systems will be disruptive and requires some investment. There’s also concern about the potential risk of putting all that data online.

In July, CoinDash, a blockchain technology startup, said its website was hacked and $7 million was stolen from investors trying to participate in the company’s initial coin offering. In November, Tether Ltd. disclosed on its website that a “malicious” attacker swiped $31 million in tokens and sent them to an unauthorized bitcoin address.

“So many things could go wrong,” said Peter Thomas, a senior vice president in Chicago for Zaner Group LLC, a commodity trader. “Before I have faith in it, we’re going to have to see it work for a while.”

Blockchain “brings some much-needed innovation” in an industry where the current process has been “paper and labor intensive,” Arnaud Stevens, Natixis’ New York-based head of global energy & commodities, said when the new system was announced in March.

European utility companies Enel SpA and RWE AG joined a project to test blockchain-based trades in wholesale power and natural gas markets. TenneT Holding BV is looking at the technology to manage power grids that are preparing to accommodate the growing volume of renewable energy. Vemanti Group Inc. said Dec. 12 it will invest in a Singapore-based company developing a blockchain-based platform energy trading.

There was even a proposal this month by the president of Venezuela, where the domestic currency is in freefall because of economic sanctions and a long recession, of creating digital petrocurrencies backed by the country’s reserves of oil, gas, gold and diamonds. This week, a group announced plans to use blockchain to create OilCoin, a U.S.-government regulated digital currency that would be backed by crude.

Consumers could also benefit from wider adoption of the technology. In Thailand, power producer BCPG Pcl said last month it plans to use the blockchain to allow customers who produce energy through solar rooftops to engage in internet-based energy trading.

“The potential is huge to increase efficiency and to create value propositions,” said Harry Smit, a Utrecht-based analyst at Rabobank. “Once you’ve established blockchain and it’s working, you will see faster changes, because then the transformation of the value chain becomes an option.”