New EU level targets for 2030 will require fast decarbonization in the power sector, and a major acceleration of the energy transition in some European member states that still rely heavily on coal generation. The EU Commission’s plan to use the EU carbon trading scheme as a key instrument to achieve these targets could drive some 40GW of coal power plants out of the market in central and eastern Europe by 2030, provided national policies to enable replacement economic clean capacity build are enacted. 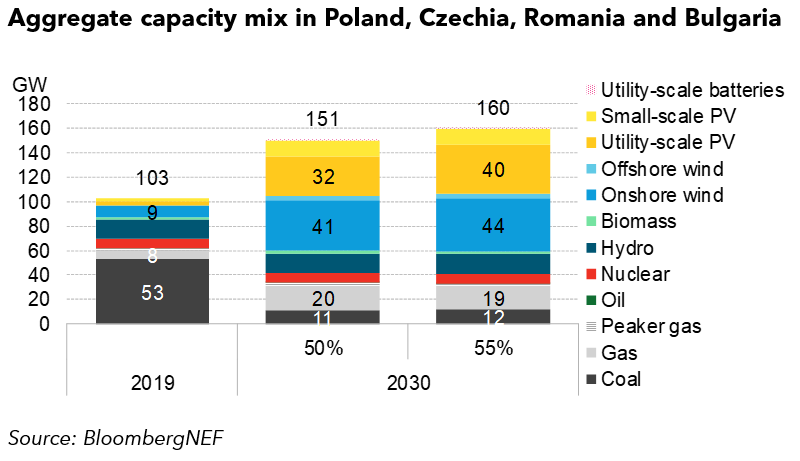 BloombergNEF, with support from Bloomberg Philanthropies, examined the least-cost pathways for the power sector in Poland, Czechia, Romania and Bulgaria, in the report Investing in the Transition of Europe’s Coal Regions. This research uses the same foundations to examine the impact of higher climate ambition, as the EU discusses its 2030 emissions reduction targets. The EU Emissions Trading System will be one of the key policy tools used by the European Commission to achieve its 2030 goals, so this analysis is carried out using different carbon price scenarios.

Poland, Czechia, Romania and Bulgaria are European member states with the highest share of coal generation that do not yet have a plan to phase out the fossil fuel. Higher carbon allowance prices will therefore impact coal generators in these countries particularly hard.  BNEF modeling shows how these countries’ power sectors could evolve through 2030 in response to higher carbon prices, depending on whether the EU adopts a 50% or 55% emissions reduction target.

A large share of these countries’ coal fleets are already uncompetitive, so even the 50% carbon price scenario sees coal generation falling rapidly when economics alone drive dispatch. Between now and 2030, around 40GW of coal retires across the four countries, much of which before 2025. In Czechia, this leads to an almost total phase out of coal before 2030, while Romania and Bulgaria both phase out coal completely by the middle of the decade. The amount of coal generation capacity rendered uneconomical under these higher carbon price scenarios highlights the importance for policy makers of managing the socio-economic implications of rapid closures.

To meet this gap, new capacity and the policy that enables its deployment are needed as soon as possible. Poland already has a renewables pipeline under development, but Czechia, Romania and Bulgaria are starting with a much lower baseline and lack a policy framework. These constraints will limit the speed of renewables uptake in the first half of the 2020s, and create a need for around 10GW of new combined cycle gas capacity across the four markets to ensure security of supply.

As renewables build accelerates from the middle of the decade, this zero-marginal cost generation squeezes gas generation as well as coal, as both are exposed to rising carbon prices. This raises questions about the long-term investment case for new gas assets, which will likely need to look toward possible conversion to green gas or hydrogen from the 2030s, in order to avoid becoming stranded assets that are unable to compete with renewables. 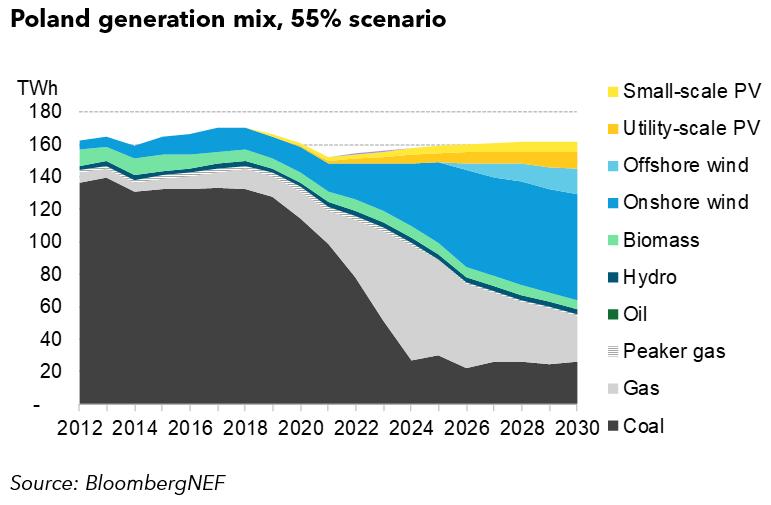 A 50% emissions reduction target could see power sector emissions from Poland, Czechia, Romania and Bulgaria decline 78% from 2018 to 2030, while a 55% target could bring emissions down 82% during the same period. This reduction will be a critical contribution to the EU’s 2030 goals, which would require the bloc to cut the equivalent of total emissions of the German economy. 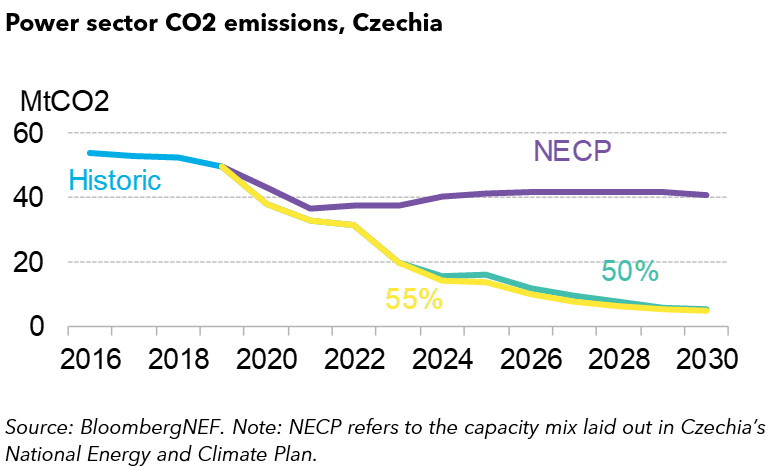 These carbon price scenarios bring about considerably higher emissions reductions than each country’s proposed contribution to the EU’s 2030 goals laid out in their National Energy and Climate Plans. Even a 50% emissions reduction target will require member states to rethink their roadmap to and goals for 2030.

The unprecedented levels of EU funding available as part of the EU green deal and recovery plans will offer these member states opportunities to manage the transition away from coal, and to create a more sustainable energy system overall. EU recovery funds are to be deployed as early as next year, so each of these countries will need to quickly work out a plan to make use of these funds for a sustainable recovery.