World leaders will gather virtually April 22-23 at a summit to discuss boosting their climate pledges. As host, the U.S. is expected to set an example by announcing its 2030 emission target and other governments are expected to follow suit. But evaluating these goals is like trying to compare apples with penguins because targets have different structures, baselines and deadlines.

Our latest report, How COP26 Climate Pledges Compare in Run-up to Earth Day, seeks to unravel the mystery by using four methods to compare the commitments made by the G-20 economies. We outline these methods below.

Change in volumes of emissions

The U.K., EU and Brazil have the most ambitious 2030 targets based on the change in volumes of emissions 2010-30. All three parties’ pledges would see them doing their part to limit global warming to 1.5 degrees Celsius – one of the goals of the Paris Agreement. In contrast, developing countries – notably Turkey, India and China – could meet their 2030 targets while increasing their emissions substantially.

Emissions per unit of GDP

Emerging economies often peg their targets to emissions per unit of GDP (‘emission intensity’). This goal type can promote decarbonization, while allowing for economic growth. On this basis, the U.K. and EU still take the top two spots. China and India move up the ranking but their targets are not aggressive enough to ensure a global temperature increase of less than 2 degrees. 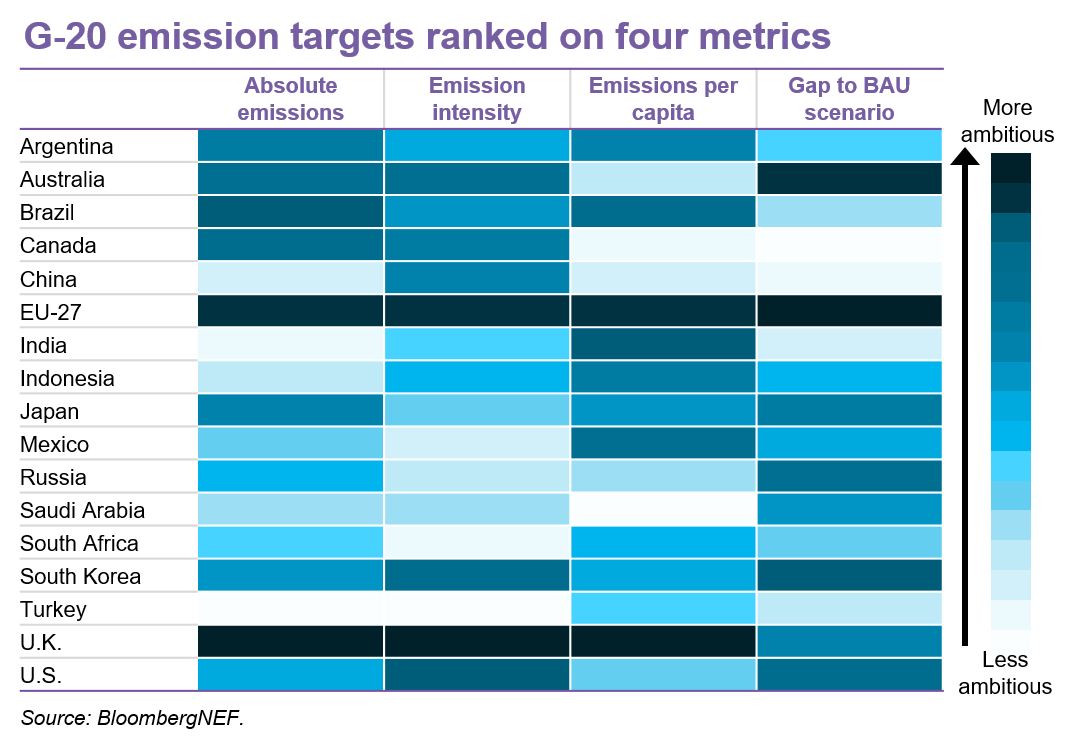 Governments tend to set emissions per capita goals if they expect significant population growth. On a per-capita basis, all but five of the G-20 countries’ pledges would result in lower emissions. But only the U.K.’s total is below our estimate for the level required for a 1.5-degree target.

The fourth way involves measuring the gap between emissions if the target is met and what emissions would have been absent a target. Based on this, only the EU-27 would be aligned with a 2-degree scenario as its target requires significant change. For seven G-20 nations, emissions under their 2030 targets would be higher than they would be without a goal.

In an effort to unify clashing methodologies, BNEF has created aggregate country scores. Depending on the level of ambitious, each target earns between zero and five points for each metric. Based on this system, the EU-27 and the U.K top the list. If a new U.S. pledge only aligns with its 2025 target, it will be well behind its European peers. It could close the gap only with a goal at the upper bound of what it reportedly is considering (eg, a 53% or so emission cut by 2030). China and India may could find themselves under pressure in coming days as their pledges can only be regarded as ambitious under the criteria they set for themselves.