In the first quarter of 2020, OPEC+ turned on the oil production taps. Soon after, Covid-19 erased almost 9 million barrels per day (m b/d) of oil demand across 2020, the largest annual decline ever recorded. As the oil balance loosened; prices collapsed, forward curves inverted, ships filled with black gold, refinery margins were decimated, and the oil market descended into disarray. Following such unrivaled disruption, things can only get better in 2021.

Both upside and downside risks remain, yet BNEF expects total oil demand to increase by more than 4.7m b/d in 2021. However, such a significant and prolonged dip in consumption promises to have lasting effects on the market in, and beyond, this year alone.

As expectations of the demand recovery have waned, the global ‘swing producer’ status is likely to move from U.S. shale back to OPEC+. 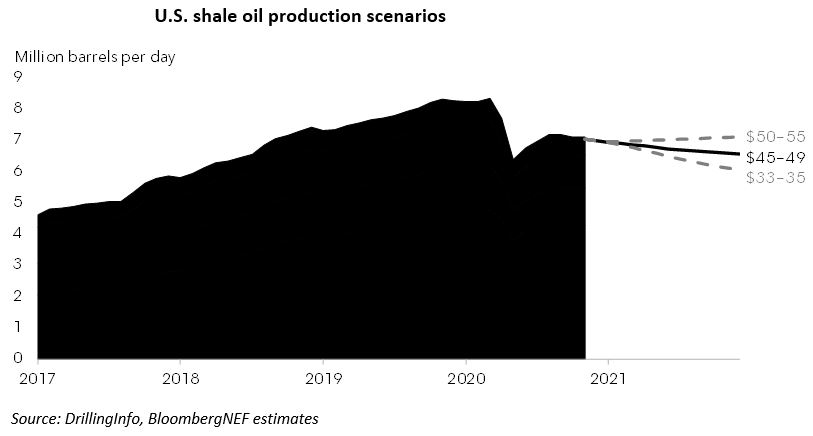 When oil prices collapsed in 2020, the situation was mirrored in U.S. shale profitability. Oil production from the four major U.S. shale basins – Permian, Eagle Ford, Bakken, and Niobrara – dropped by 1.3m b/d in 2020, a 16% decline year-on-year and a stark departure from the 22% average annual growth rate seen from 2017 to 2019. Despite the recent recovery of WTI back above $50 per barrel, U.S. oil producers have stated their intention to continue focusing efforts on debt reductions for 2021. As a result, extra cash flow from higher oil prices will likely be used toward de-leveraging instead of investing in additional production growth. If they remain true to their word, shale output will likely remain flat in 2021, with at most a very modest growth rate of around 5%. This would be a far cry from the double-digit growth of previous years.

Over to OPEC+. Booming U.S. production is somewhat controlled, but with the virus-induced demand headache persisting, there is an even greater need for OPEC+ to exercise supply restraint. In the most recent OPEC+ meeting on January 4, Saudi Arabia pledged an additional 1m b/d output cut for February and March, boosting the resolve of the fragile OPEC+ agreement. If compliance is achieved, the global oil market could enter a supply deficit in 1Q 2021. Assuming a 100% compliance rate, 40% of the oil supply surplus accumulated in 1H 2020 would be eliminated by the end of 1Q 2021.

Boom and bust for refiners

China-based refiners benefited from low crude prices in 2020, but cheap oil did not save downstream players everywhere. Persistently weak margins and low oil product demand forced many refiners to reassess the viability of many plants in 2020. Hopes of a recovery have been buoyed by the rollout of vaccines. Yet fresh lockdowns in Europe, the U.S. and parts of Asia could force a recalibration of expectation for the pace of the recovery in the coming months.

Many refineries continue to run at reduced rates, with margins under additional pressure from higher crude prices in the wake of tightening OPEC+ cuts. An uneven recovery in demand across sectors and regions has allowed some refiners to benefit from alternative sources of demand in order to prop up margins. For example, Northwest European producers exported middle distillates to the U.S. Atlantic coast in 2020, a reversal of ‘normal’ flows. However, such arrangements are unable to  save the majority of refiners. Global refinery capacity closures announced in 2020 exceeded 2.4m b/d, which is 40% higher than during the last oil price shock of 2015. BNEF expects persistently low margins to accelerate the closure of further capacity in high-cost regions, such as Europe. 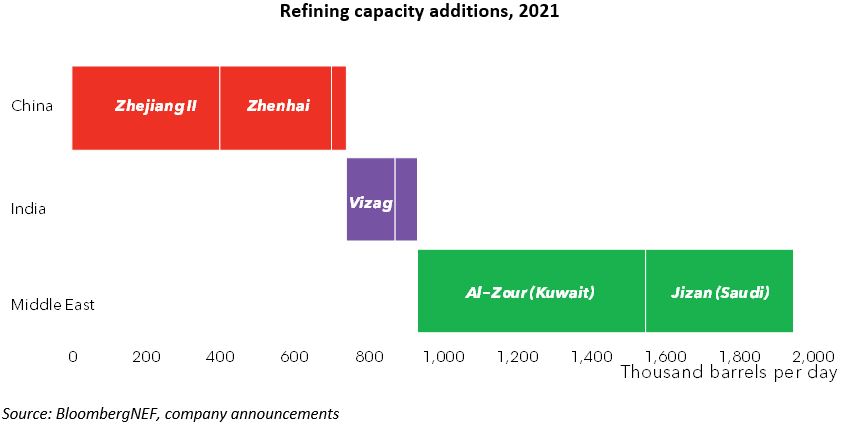 The commissioning of new refining capacity this year will also impact the downstream outlook. Around 2m b/d of new refining capacity is due to come online, mostly state-of-the-art mega-refineries in China and Middle East. Kuwait’s Al-zour refinery and Saudi’s Jizan refinery will add to the competition in the east-west fuels market. Both refineries are export-oriented and aim to tap into the markets in Europe, Asia and Africa. Chinese refineries, which are significant producers of petrochemicals, also seek to boost exports. As a result, BNEF expects to see increased volumes of gasoil voyage from East to West. With additional product supplies further impacting margins and accelerating closures, coastal refineries in Europe and Asia are at risk of increased competition from new, efficient and low-cost producers.