The world’s biggest scientific experiment is on course to become the most expensive source of surplus power.

Components of the 20 billion-euro ($24 billion) project are already starting to pile up at a construction site in the south of France, where about 800 scientists plan to test whether they can harness the power that makes stars shine. Assembly of the machine will start in May. Unlike traditional nuclear plants that split atoms, the so-called ITER reactor will fuse them together at temperatures 10-times hotter than the Sun — 150 million degrees Celsius (270 million Fahrenheit). 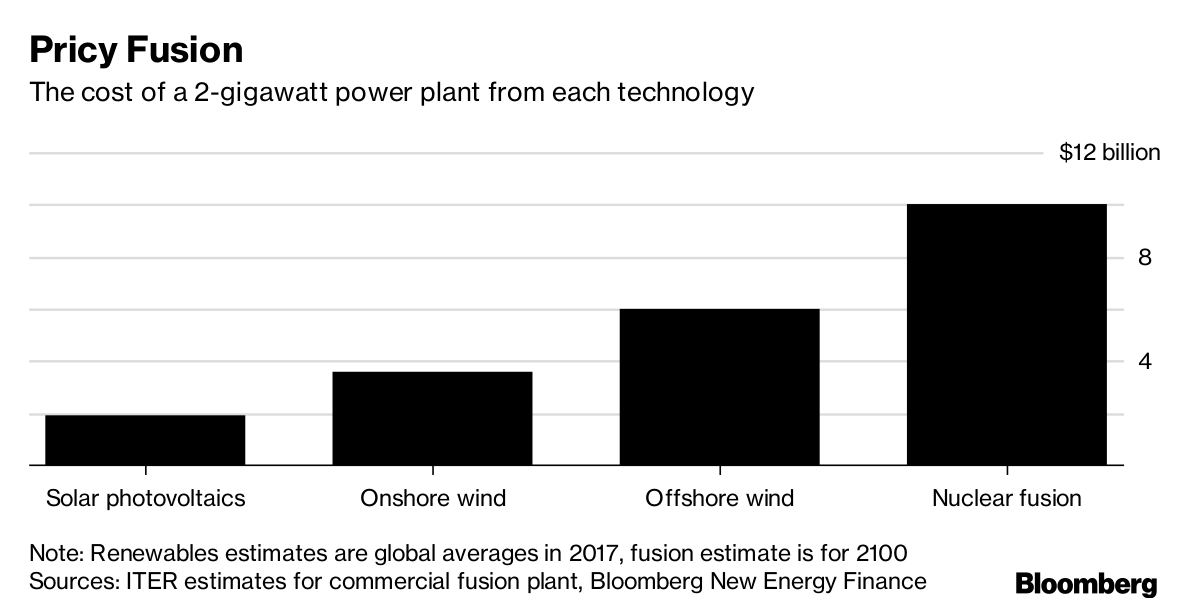 Its startling complexity, with more than a million pieces and sponsors in 35 countries, mean questions remain about over whether the reactor will work or if it can deliver electricity at anything like the cost of more traditional forms of clean energy. With wind-farm developers starting to promise subsidy-free power by 2025 and electricity demand stagnating, even the project’s supporters are asking whether ITER will ever make sense.

“I’m dubious,” said Chris Llewellyn Smith, director of energy research at Oxford University who has spoken in favor of the research project. “The cost of wind and solar has come down so rapidly, so the competition has become harder to beat than you could have conceivably imagined a decade ago.”

ITER, short for international thermonuclear experimental reactor, was supposed to offer plentiful power from a zero-pollution source when governments started it in 2006. Now, as wind and solar farms spread, some without the help of subsidies, ITER in Provence is still decades away from proving whether its scientific theories can be put into practice. 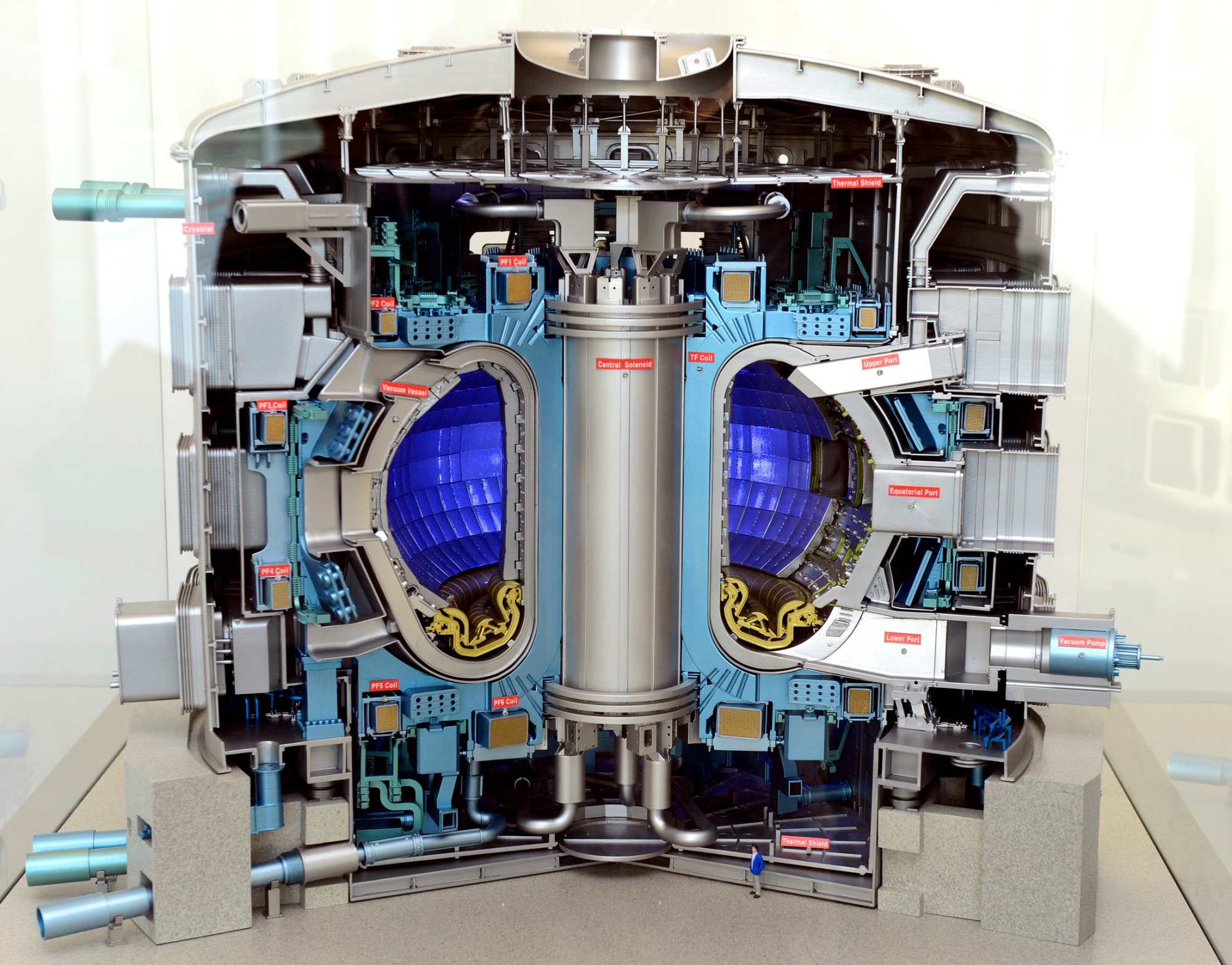 A model of the reactor. Photographer: Gerard Julien/AFP/Getty Images

In the decades it will take to prove itself, renewables are likely to mushroom, thanks to a 62 percent plunge in the cost of solar panels over the past five years. Wind energy has followed similar trends as turbine sizes surged, boosting the spark coming from each unit. Batteries also are spreading, reducing the need for utilities to maintain a constant “baseload” of supply that ITER would feed to the grid.

“The concept of the need for baseload generation is fading away,” said Paolo Frankl, who heads the renewable power division of the International Energy Agency, a Paris-based institution advising nations on energy. “Technically, you could run a system 100 percent on renewables and even 100 percent just wind and solar.”

Frankl says countries backing the project should stick with it because the research still might pay off. The world, he said, doesn’t “have the luxury of avoiding any option” in ensuring power supplies.

ITER’s promoters say fusion is one of the few possibilities to generate electricity at a gigantic scale without jacking up greenhouse-gas emissions.

“It’s a dream to feel we could go on only with solar energy,” Bernard Bigot, the French theoretical chemist who is director-general of ITER, said in an interview at the group’s site near Marseille. “You need a reliable supply of energy. If you don’t have baseload energy, renewable energy doesn’t work, unless you want go back to the time where people had to stop when there were no resources.”

Even so, Bigot acknowledges he must demonstrate the project isn’t just a bottomless money pit to keep its backers interested.

Shares of the project are owned by the European Union, China, India, Japan, Russia, South Korea and the U.S. Since its inception in 2006, it has been plagued by delays. Last year, it had to ask for another 5 billion euros to keep going.

To evenly distribute the scientific and economic gains among the consortium’s members, ITER has issued more than 2,800 manufacturing contracts and signed some 100 agreements with separate procurement agencies.

“We have a very challenging managerial issue,” said Bigot, who was named ITER’s director in 2015 to get the experiment’s management in order. “For sure the biggest challenge is to make all these people work together.”

One of ITER’s biggest impacts so far has been in creating new markets for advanced materials. One example: superconducting niobium-tin wires developed to contain ITER’s powerful nuclear reactions can also be used to transmit electricity at high voltage. 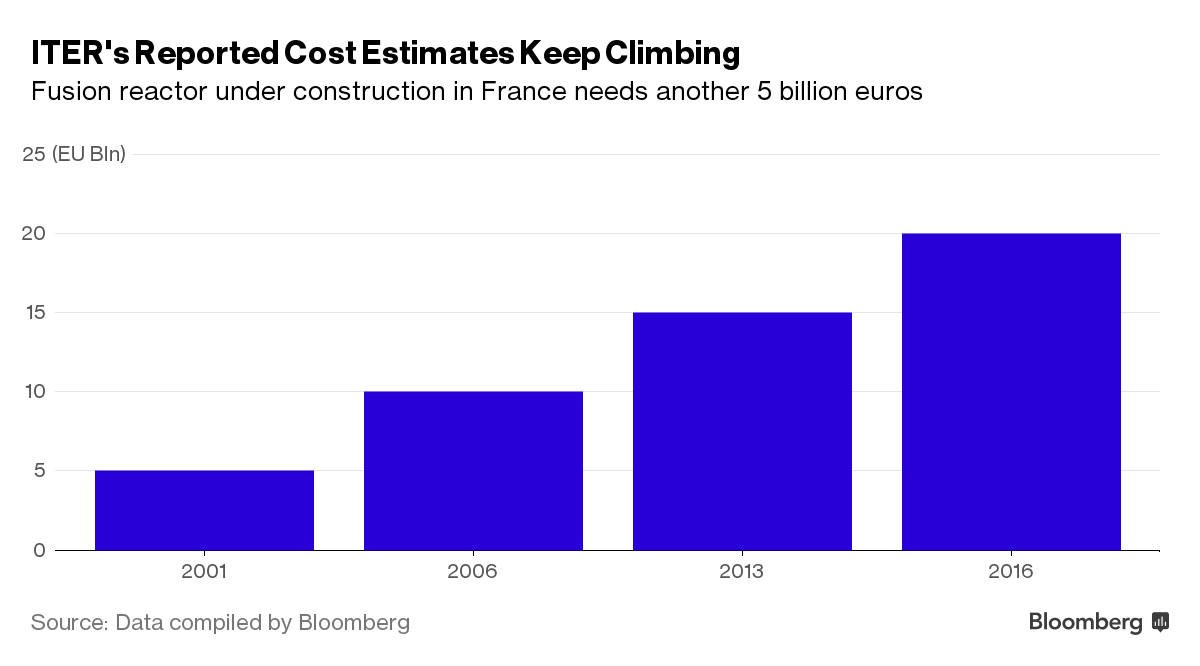 Funding for the project is starting to look shaky. In 2015, the 28-nation European Union diverted 500 million euros from ITER, saying that it would eventually pay it back. ITER has received half of it to date. The U.S. contribution comes through a congressional continuing resolution that expires on Dec. 8, according to a spokeswoman for the Department of Energy in Washington.

“Continued funding has been contentious,” said Jessica Lovering, director of energy at the Breakthrough Institute, a research group in Oakland, California, that has been tracking the issue. “Often the funding has been cut entirely in draft budgets only to be restored in the final version. With the current administrations focused on energy, there might be a push to keep it. But since ITER is located outside U.S. borders, that might be a sticking point.”