After helping give birth to the U.S. shale boom a decade ago, Mark Papa is starting over at age 70 with a new $3.6 billion oil explorer he built from scrap amid the worst market crash in a generation.

Papa forged a reputation by building the Enron Corp. castoff EOG Resources Inc. into the fourth-biggest U.S. driller. Now, starting with a $500 million private-equity stake, he’s boosted the value of Centennial Resource Development Inc. more than sixfold in under two years. The company has no debt, unheard of in the industry, and is flush with assets in one of the world’s busiest oil patches.

“It’s ‘Return of the Jedi,”’ said Irene Haas, an analyst at Wunderlich Securities who has followed Papa for years. “Because of his tremendous reputation and track record, he’s able to attract quite a bit of investment.”

For Papa, such a gamble is nothing new. Beginning in the late 1990s, as the industry’s giants hunted for oil and gas in far-flung corners of the globe, EOG helped launch the shale boom by joining the evolving technology of fracking with sideways drilling to tap then-forlorn fields in places like Texas and North Dakota. The result: A $1 investment when Papa became CEO in 1998 was worth more than $1,800 when he left in 2013.

“It’s kind of a personal challenge after EOG to see if we can have some fraction of that success with Centennial,” Papa said as he sipped lemonade from a styrofoam cup in a rare interview recently at his offices in Sugar Land, a suburb 20 minutes south of downtown Houston. 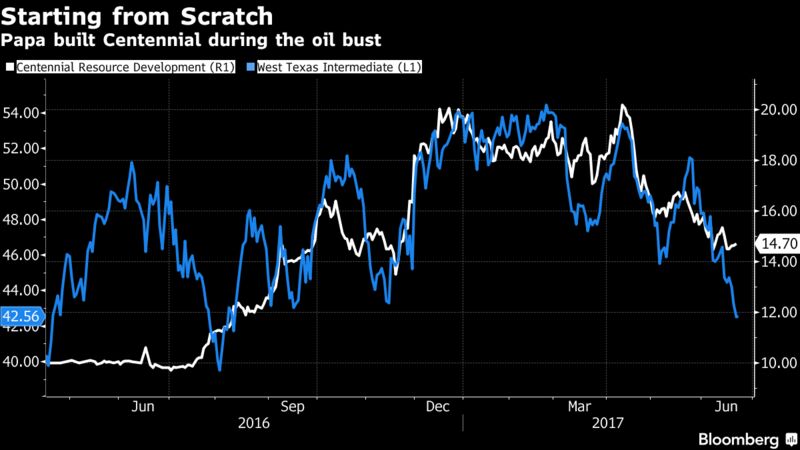 Centennial was formed early last year, just as oil prices hit rock bottom at $26.05 a barrel from more than $100 in 2014. With the help of Riverstone Holdings LLC, a private equity firm where Papa is also a partner, he used a unique investment vehicle known as a special purpose acquisition company, or SPAC.

Such an investment is “really based on a lot of faith,” Papa explained. “You basically just go out and raise the money and you tell investors, ‘Trust me, I’m an experienced manager. You give me the money, I’ll find a good E&P asset, and if I can’t do it within two years, you’ll get your money back.’”

Starting with a blank sheet of paper, as oil prices tumbled to their lowest point last year, Papa scribbled down roughly a half dozen wish-list ideas he’d want in his next company. They included:

As a SPAC, Centennial first had to acquire an enticing enough asset that the original shareholders would vote to approve, and which came with a set of audited financials for at least the past two years.

Finding that was harder than he expected, Papa said. Doing a deal with a major oil company was out because they move too slow, and the clock was ticking. Once Centennial sold shares as a SPAC, he had two years to make an acquisition with the money or return the cash to investors.

Papa found his best candidate for an acquisition in the Permian Basin, the nation’s busiest oilfield. Natural Gas Partners was considering spinning off assets in an initial public offering.

“We negotiated with NGP and said, ’You don’t want to IPO this, you just want to sell it to us,’” Papa said. “And we did — we convinced them.”

It took some luck, he said. Analysts see it differently.

“Clearly we’re talking about Mark Papa, who’s the gold standard for the industry, from a CEO perspective,” said Derrick Whitfield, an analyst at Stifel Nicolaus in Dallas, who rates the shares a buy and owns none, in a telephone interview. “There’s a tremendous more amount of skill involved here than what he would lead on to.”

His relationship with Riverstone certainly didn’t hurt. Papa’s ties with Riverstone co-founders Pierre Lapeyre and David Leuschen go back to the early days of Enron Oil & Gas when the private equity principles were the oil company’s bankers at Goldman Sachs. They kept in touch with Papa after he stepped down from the CEO gig at EOG.

Papa hated retirement. After about a year, he reached out to Lapeyre and Leuschen, and the private-equity firm decided to bring him on board as a partner. Very high on their list was to build a mini-EOG with Papa, taking advantage of the oil-market downturn, according to a person close to Riverstone.

Papa rolled his eyes at the thought, according to the person.

Since Papa took on the job, though, Centennial has grown faster than Riverstone expected, the person said, noting it often takes the firm five to seven years to build a company that’s half or a third the size of Centennial.

Daniel Yunger, an outside spokesman for Riverstone, declined on behalf of Leuschen and Lapeyre to comment.

With a couple decades of oilfield experience under his belt, Papa got his first CEO job in the late 1990s. That’s when Enron promoted him to the top of its oil and gas unit just prior to divesting it. Enron, the energy trader that went bankrupt after lying about its finances, shed EOG in 1999, citing volatility in natural-gas prices. 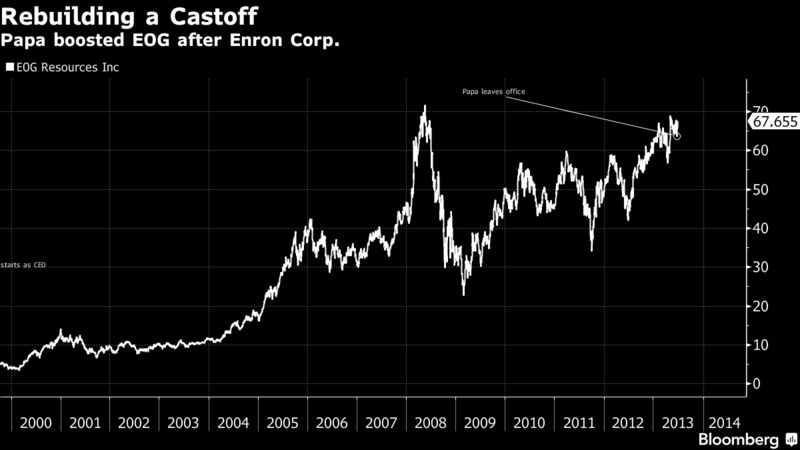 A key Papa trademark at his companies is bypassing technology from the oilfield service companies, opting instead for in-house innovations. It’s what led Paul Sankey, an analyst at Wolfe Research, to dub EOG under Papa’s watch the “APPL of oil,” referring to the trading symbol for Apple Inc. He’s again doing that at Centennial, having hired key former EOG executives to help make technology one of the pillars of his new company, Haas said.

George Mitchell is widely credited for being the first to kick-start the shale boom using fracking and horizontal drilling, but he quickly sold his company to Devon Energy after finding success. After that, it was Papa and a select few who quickly moved in to use technology to make the shale boom what it is today.

Papa is considered such an expert on shale, OPEC officials invited him to Vienna last month to brief them on his production estimates (which were lower than the cartel’s, according to delegates at the meeting).

Going forward, the Permian, which is made of up many pancaked layers of oil-soaked rock in West Texas and New Mexico, will see the greatest leaps in well improvements over the next four to five years, Papa said in the Bloomberg interview.

Centennial’s shares are up 47 percent since opening at $10 a share in April 2016. That’s better than the producers’ Standard & Poor’s sub-index, which has actually lost money in that time frame. Centennial has six buy ratings from analysts and one hold.

West Texas Intermediate crude, the U.S. benchmark, has dropped 20 percent this year, sliding into a bear market as U.S. production swells. The contract added 0.1 percent to $42.80 a barrel on the New York Mercantile Exchange at 7:08 a.m. local time on Friday.

For now, Papa is working off a five-year plan, he says.

“And past that, they should be so big and viable that they either keep going or they get acquired,” Haas said. “Anything can happen.”