House approval of the Build Back Better Act marks a major victory for the U.S. renewable-energy sector. While the legislation must still clear the Senate, as written it provides unprecedented support for wind, solar and energy-storage developers. Particularly in liberalized U.S. power markets, it stands to upend the competition between renewables and natural gas-fired power projects.

Specifically, the legislation expands and extends the current Investment Tax Credit, primarily used by solar developers, and the Production Tax Credit, typically used by wind. Both credits are due to sunset but under the bill would remain on the books an additional ten years, followed by a step-down. The proposed extensions would apply only to new projects.

The legislation would also enable grid-connected power-storage projects such as large-scale batteries to exploit the credits on their own. Previously, such projects had to be connected to solar-generating facilities to qualify. Again, only new projects would qualify, not existing projects.

If approved by the Senate in its current form – a big if – the legislation would reshape the competitive dynamics between clean power and natural gas across much of the U.S. through the rest of the decade.

Under Build Back Better, BloombergNEF anticipates the levelized cost of energy, or LCOE, for new wind would be 30% lower than otherwise would be expected by 2030. LCOE is a metric for estimating the price at which the owner of a project can sell its power and receive a reasonable rate of return.

For new U.S. solar projects, BNEF sees the LCOE declining by almost half by 2030 compared with business as usual, thanks to particularly generous support for the technology in Build Back Better. A typical standalone storage project would see its LCOE sink 15%. 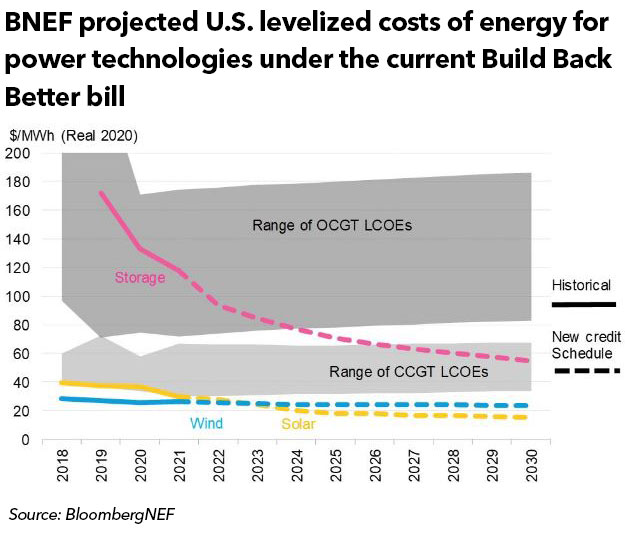 Renewables and storage today typically vie with natural gas-fired projects to be the lowest-cost providers for energy and capacity on the grid (coal and nuclear costs are generally higher). The projected lower LCOEs for storage have the potential to leave open-cycle gas plants, in particular, out in the cold, though closed-cycle plants will face stiffer competition from renewable generation as well.

All of this has major ramifications for top U.S. power plant operators, including NextEra Energy Inc., the largest owner of wind and solar assets. Others sure to be impacted include Exelon Corp., NRG Energy Inc. It also stands to support a raft of wind and solar equipment makers such as First Solar Inc.