The wind sector has shown resilience in 2020. It is set to deliver its highest-ever installations in a year when Covid-19 has wrought unprecedented economic and logistical chaos on other industries. Wind has emerged from the pandemic in a stronger position than before, with many governments around the world striving to make renewable energy a central part of economic recovery packages.

Investors are bullish about the industry’s prospects. First Trust Global Wind Energy ETF – the world’s only exchange-traded fund (ETF) targeting the global wind industry – has seen gains of over 44% since the beginning of the year (Figure 1). By contrast, iShares Oil & Gas Exploration & Production UCITS ETF, an ETF tracking performance of global companies involved in oil and gas production, has fallen by almost 30%.

Next year could be even bigger and better for wind. We expect onshore installations could break the records set this year. From 2022, though, growth in the onshore sector looks set to stall. The 40GW increase in our China forecast this quarter hides a worrying slip elsewhere. Ex-China onshore additions fall from just below 50GW in 2021 to around 30GW in 2025 in our forecast. 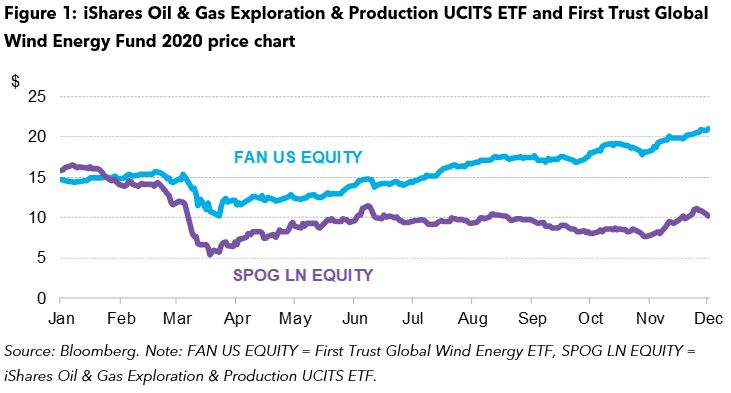 The U.S. provides one of the clearest examples of this decline. Amidst growing calls that the sector should compete on its own after years of government support, the country’s flagship subsidy scheme, the production tax credit, is phasing out before expiring in 2026. While the most competitive projects will still find a route to market, without a new subsidy, this will inevitably lead to shrinking installations.

These ups and downs shows onshore wind’s vulnerability to sudden swings in political sentiment. We have seen it before. Spain and the U.K. were two of Europe’s most promising onshore wind energy markets in the early 2010s. A political backlash against lavish legacy subsidy schemes, however, saw damaging retroactive subsidy changes in Spain and was partially responsible for harsh cuts in the U.K. Installations plummeted. Both now have two of the most active markets for subsidy-free onshore wind, but once again political sentiment has changed. Governments have already lined up new onshore wind auctions. While a renewable energy sector that does not need support is attractive, new administrations in both countries acknowledged that subsidy-free projects alone would not deliver capacity on the scale required to hit ambitious climate targets.

Governments in other regions do not share such ambition or have such deep pockets. Markets will continue to slash tariffs and either edge towards auctions, like in Japan, Ukraine and Vietnam, or look to phase out subsidies altogether like in the Nordics. To deliver consistent growth, onshore wind developers will need to find creative ways to secure revenue and reduce risk in projects increasingly exposed to volatile power prices. Finding routes to market without subsidies and freeing themselves from the whims of politicians could help deliver more consistent growth.

Another problem that developers face in established markets is growing local opposition. Resistance from communities is one of the key bottlenecks in markets from Germany to South Korea. Efforts to resolve the issue include establishing community benefit funds (compulsory in Ireland’s new auction scheme), or allowing locals to invest directly in nearby wind projects. Solving this problem could be key to unlocking a new wave of installations in Europe and beyond.

Undercut on price by solar, and facing more opposition than offshore turbines, onshore wind does not enjoy the rapid growth forecasts of its competition. As the sector matures, it must learn to better champion its value to the grid, cope better without subsidies and live in closer harmony with local communities if it is to maintain consistent growth and stay relevant in the energy transition.