Shale Boom May Finally Have Succumbed to Oil’s Price Slump

Oil’s bear market may finally be taking its toll on the shale boom.

Hours after Halliburton Co. warned Monday that explorers are “tapping the brakes” on drilling, Anadarko Petroleum Corp. said it’s trimming spending in the first earnings report this quarter from a major shale producer.

That could make this week a turning point for the troubled global oil market — the moment when shale companies showed signs of bowing to the low prices they helped inflict. The surge in U.S. production this year has stymied efforts by OPEC and other major oil exporters to unwind a supply glut that’s weighed on the crude market for three years. Whether drillers have finally reached their limit may depend on how investors respond, said Mike Kelly, a Seaport Global Securities LLC analyst in Houston.

“If Wall Street rewards them for being more reserved with their activity levels and capital expenditures, then maybe it catches on,” Kelly said in a telephone interview. If Anadarko shares suffer, on the other hand, “I think other people will be reticent about coming out and saying, ‘we’re cutting as well.’”

The initial returns weren’t great for Anadarko, one of the biggest oil and natural-gas explorers in the U.S. Shares of The Woodlands, Texas-based company slumped in after-hours trading, slipping 3.6 percent to $42.60 at 7:30 p.m. in New York. The company also reported a second-quarter loss on Monday that was wider than analysts expected. 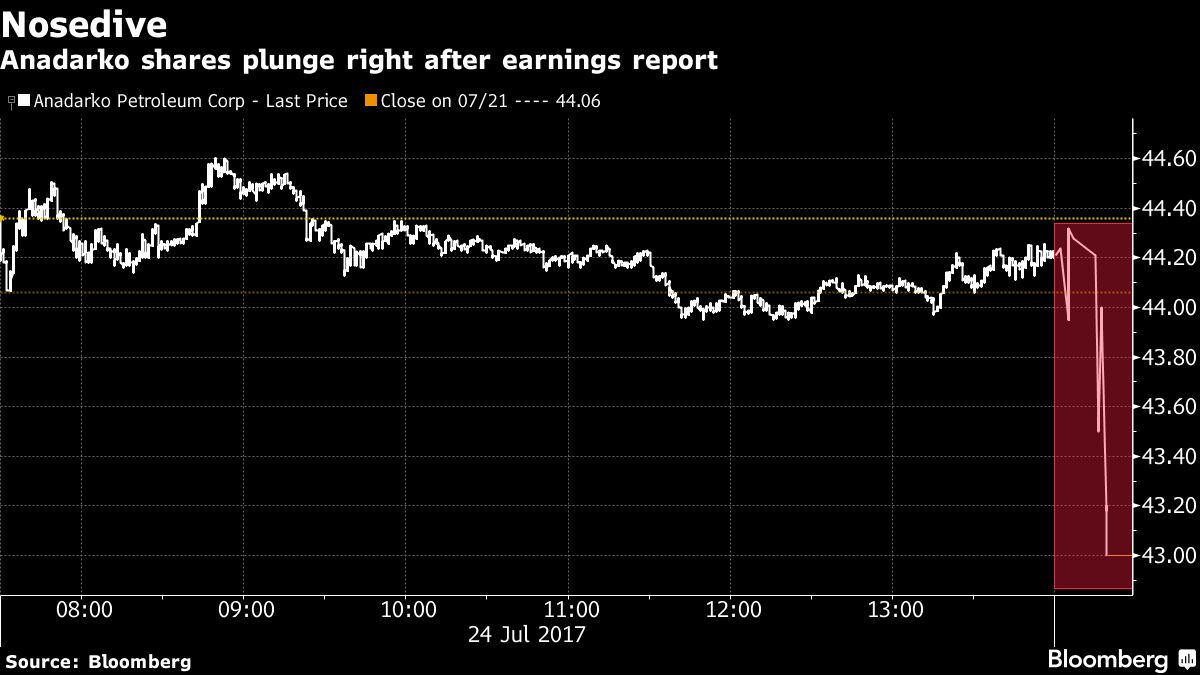 Shale explorers started the year in a frenzy of renewed drilling, taking advantage of prices that climbed above $55 a barrel on OPEC’s promises to cut production. Anadarko, for one, said it would boost its capital budget by 70 percent. But crude’s momentum petered out, and prices have been stuck below $50 for two months.

Now, Anadarko plans to pare $300 million from its 2017 capital budget, lowering it to a range of $4.2 billion to $4.4 billion, according to a company statement Monday. It also lowered its oil and gas production forecast for the year.

“The current market conditions require lower capital intensity” given the “volatility” facing the market, Chief Executive Officer Al Walker said in the statement. “As such, we are reducing our level of investments.”

Anadarko’s pullback followed an assessment earlier in the day from Halliburton, the top fracking-services provider, that drilling was slowing down. This U.S. surge is “showing signs of plateauing and customers are tapping on the brakes,” Halliburton Executive Chairman Dave Lesar told analysts on a conference call earlier Monday. The comment came just days after data from Baker Hughes, the oilfield service company, showed explorers cutting the number of U.S. rigs for the second time in four weeks.

Anadarko faced some unique circumstances, said Kelly, the Seaport Global analyst. Production volumes have dropped in Colorado after a fatal house explosion in April that was linked to a natural gas well owned by Anadarko. The company shut down 3,000 wells in the state for further inspections.

Its spending this year was also inflated somewhat as Anadarko rushed to secure drilling rights in Texas ahead of the expiration of a joint venture with Royal Dutch Shell PLC, Kelly said.

Still, its cutback could “set the tone” for other U.S. explorers and producers, the analyst said. Such a sign of self-discipline could “prove to be a major short-term catalyst for the E&P space given investor sentiment is as bearish as we’ve ever witnessed.”

Anadarko lost $415 million, or 76 cents a share, in the second quarter, an improvement over the $692 million, $1.36-a-share, loss of a year earlier. Its loss, adjusted for one-time items, was 77 cents, wider than the 33-cent average loss predicted by 29 analysts tracked by Bloomberg.

Anadarko CEO Walker had acknowledged the potential need for a pullback at an investor conference last month, where he said investors’ willingness to fund even unprofitable shale drillers was “the biggest problem our industry faces.

“As long as investors continue to invest in companies with growth, with marginal wellhead economics, you’ll get more growth,” Walker said during the June 20 meeting. “You guys can help us help ourselves. It’s kind of like going to AA. We need a partner. We need somebody to sit through that class with us.”