U.K. Energy Users Have a Taste of Brexit and They Don’t Like It

Britain is getting a preview of what some energy bills might be like after Brexit. And it’s not popular.

While negotiations on the U.K.’s exit from the European Union have stalled, natural gas prices had the biggest summer rally in three years thanks to dwindling domestic supply and the planned shutdown of the country’s biggest storage facility. Industrial-scale consumers paying millions of pounds for energy are seeking reassurance that Brexit won’t make it worse, as the plunge in the pound has already boosted import costs.

Things are bad enough that Ineos Group Holdings Plc, the U.K.’s biggest closely held company, is considering making its own version of Britain’s iconic Land Rover Defender car in Germany, where industrial power rates are 24 percent cheaper than in Britain. And Centrica Plc, the nation’s biggest supplier to households, warned of risks with Brexit in August, when it increased electricity bills for the first time in three years.

Until its divorce from Europe becomes final in March 2019, Britain is a member of the EU’s single market, which allows electricity and gas to flow freely across borders through cables and pipelines. While there’s no indication it’ll hamper free trade, some are worried energy is an afterthought, which risks unintended consequences.

“My perception is that it’s not high on the priority list,” said Felix Lerch, executive chairman of Uniper SE’s U.K. business, which operates power stations, pipelines and a gas storage facility. “You don’t know at this point in time where it’s leading.”

A Brexit strategy speech by Prime Minister Theresa May in Florence, Italy, on Sept. 22 didn’t mention energy at all. That’s even as Britain’s dependency on foreign gas is set to rise to almost two-thirds of consumption by 2025, from about half now, on dwindling North Sea output.

The country is so heavily reliant on Norway, its biggest foreign supplier, that announcements of routine maintenance through the summer scared traders, with prompt prices jumping more than 20 percent in the third quarter. The Scandinavian nation, which met 38 percent of U.K.’s demand last year, is still on track to export a record volume this year.

Jim Ratcliffe, the self-made billionaire founder of Ineos, whose profit mainly comes from chemicals, said the government is listening to concerns from the commercial sector, but the nation has been hurt by a long-term move away from industrial activity, including energy, as a pillar of the economy. Manufacturing has slumped from 17 percent of the U.K.’s gross domestic production in 1995 to 9.7 percent percent last year, according to the World Bank.

“If you’ve got a business where energy’s important, like chemicals, you’re always going to go to Germany before you go to the U.K.,” said Ratcliffe, who will invest about 600 million pounds ($796 million) in developing the new car. “To encourage someone to invest real money in the U.K. there has to be some unique selling point.” 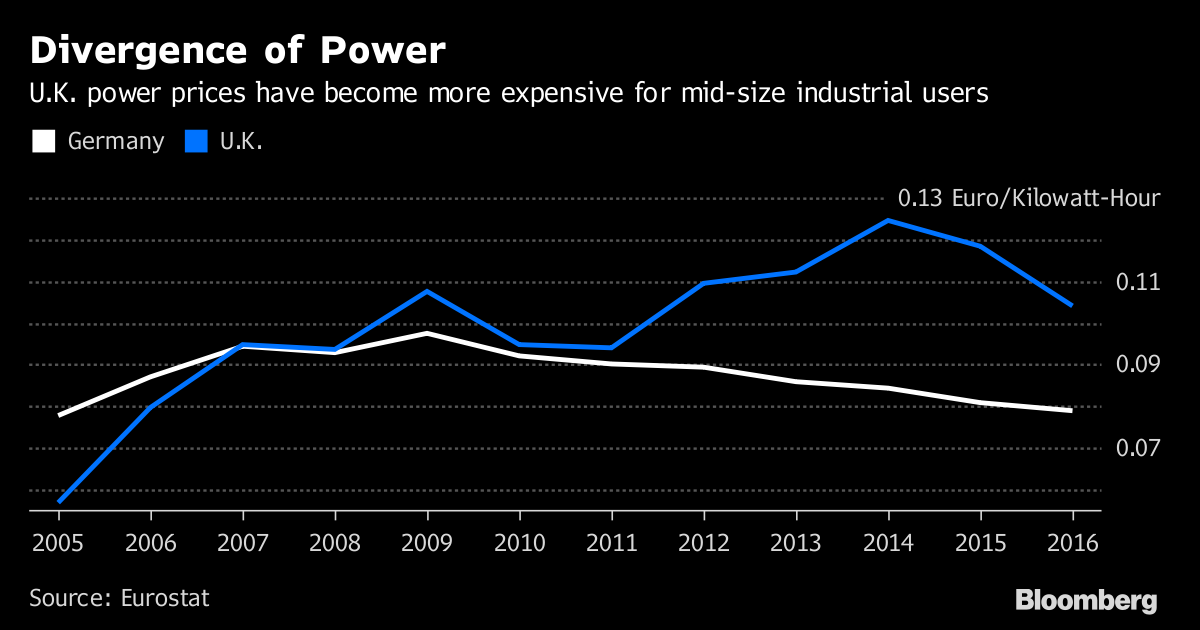 Britain’s wholesale power premium over costs on the continent is partly because coal stations have closed at a faster pace than across the channel after a floor price on carbon emissions was introduced in 2013.

The planned loss of Centrica’s Rough gas store means prices may rise further because the country will need to compete with other importers, from France to Japan, for liquefied natural gas cargoes.

Last winter, a worldwide cold snap combined with unexpected supply hiccups caused prices to jump. Britain didn’t need to bid against other nations because they had sufficient gas in storage to complement pipeline imports, but if they had, they would have paid dearly.

In one week of January, U.K. prices would have had to be 50 percent higher to attract LNG cargoes away from Asia, according to pricing data from World Gas Intelligence.

While many of the biggest energy users are concerned about what Brexit will bring, the fact that U.K. has already developed into an LNG hub will help secure supplies in the future, said Jeremy Nicholson, the director of the Energy Intensive Users Group. “It’s not like we’ve been sitting on North Sea production twiddling our thumbs,” he said.

And some gas will still be extracted from the Rough facility this winter, though it will probably flow at a slower rate than normal because the pressure is lower.

“No country’s an island, not even the U.K.,” said Matteo Mazzoni, an analyst at Nomisma Energia Srl in Bologna, Italy. “The U.K.’s a tiny fraction of global demand,” and it’s bargaining power is unlikely to deliver it the lowest prices, he said.

But U.K. homes don’t have it all that bad, at least not compared with those on the continent. Domestic power prices were 4.9 percent below the EU average last year. And households may get some respite after May on Wednesday pledged to fix the nation’s “broken” energy retail market by planning a price cap. More details will follow next week, she said.

The U.K.’s future relationship with the EU “will be subject to the negotiations but our priority is maintaining affordable, clean and secure energy supplies for businesses and households,” the Department for Business, Energy and Industrial Strategy said by email.

But there’s a risk that a potential cut in power trading will lead to higher prices because of different regulatory regimes in Britain and the EU, said Wolfram Vogel, director public and regulatory affairs of EPEX Spot SE, an electricity exchange in Paris that covers markets from Switzerland to the U.K.

And Lars Troen Sorensen, vice president for U.K. government and regulatory affairs at Statoil ASA, the Norwegian energy company, says he’s afraid that energy will become a “residual” issue in Brexit negotiations and any policy changes may also add to costs.

“If you change a number of the laws and the rules and the way we interact now, that can have some consequences on other things,” he said by telephone. “And those are things that you don’t see until it’s too late.”