You can’t accuse the EU ETS of being boring at the moment. Prices are volatile and seemingly no longer connected to fundamentals, which is worrying industrials, utilities, traders and speculators in equal measure. It seems a near-certainty that the market will be tight in the long term, but a built-up cache of EUAs and shorter-term risks mean the market could stay erratic for a while.

The price of European emission allowances has had a bit of a wobble after almost 18 months of gains and new 10-year highs. We expect volatility to be high through this year amid internal and external uncertainties. This has already been reflected in price movements. The first three months of 2019 saw prices as high as €25.31/tonne and as low as €18.80. The range of different forecasts and statements on the EU ETS underpins this year’s uncertainty.

In our base case, BloombergNEF expects an average price of €24.70 for 2019, with an end-year range between €22 and €36. However, the breadth of this range – and, to an even greater extent, those of other forecasters, predicting anywhere between €10 and €60, depending on the scenario – shows that the market is in some turmoil. A worst-case Brexit scenario of a no-deal exit for the UK, for example, could propel the price outside of the BNEF range. 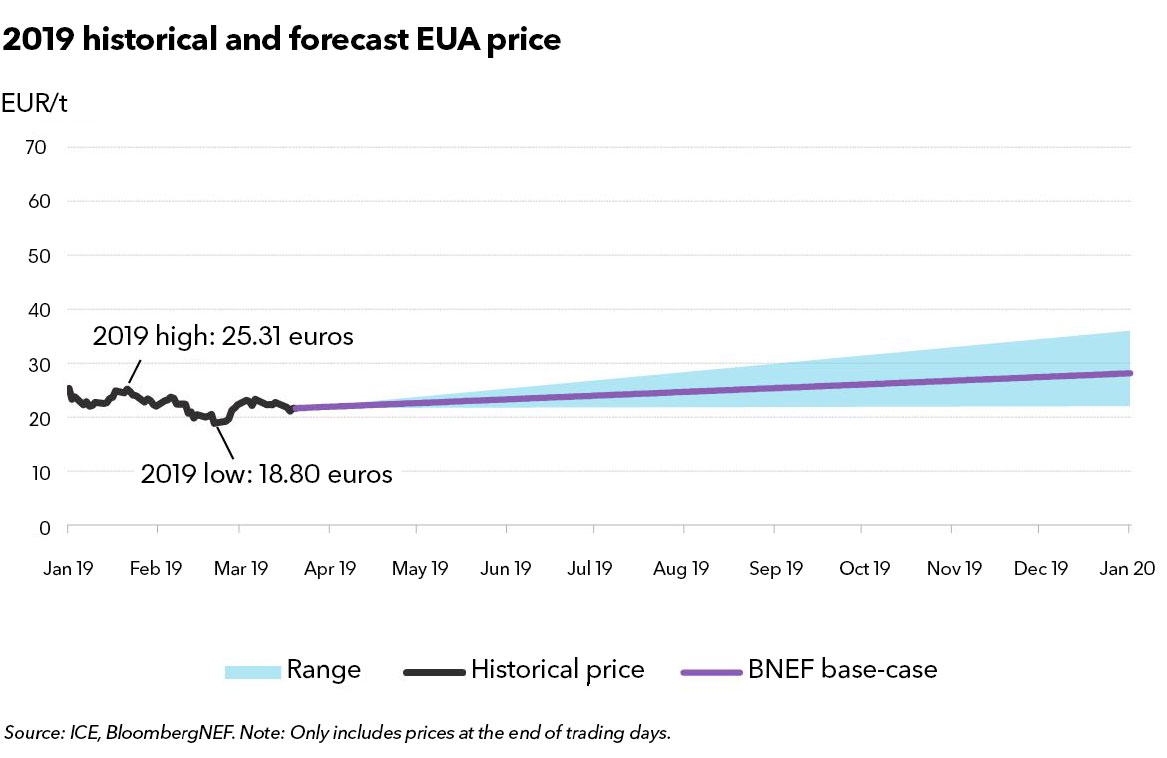 (Note that BNEF does not provide investment advice on carbon or anything else. Investors should decide for themselves whether current prices discount all the relevant factors, or not.)

To further complicate the picture, correlations with ‘traditional’ indicators such as energy commodities are erratic, making it difficult to predict where prices will go next. With this in mind, it is clear that there is a need to look at factors outside of energy market fundamentals to understand what has happened, and what will happen in 2019.

The year so far
Price movements this year have been triggered more by events and risks rather than fundamentals. Conversations with traders and other sources have led us to believe that the January-February dip was started by a sell-off from one or more skittish speculators who had suffered a bad start to the year. The price then recovered in February-March as buyers with a more bullish view saw the comparatively low price as an opportunity.

The recovery was not expected by market participants, as most short-term indicators point down. Brexit risks, more fuel switching due to a loose gas market, a possible recession, increased supply from Poland and EEA countries, and an increasing number of overlapping policies such as the German coal-phase out, are among the factors that could push carbon lower in the next 18 months or so. That prompts the question of why the price of carbon is stubbornly staying above the psychologically important level of €20/t.

The most likely reason is long-term bullishness. Downside risks might have scared speculators with a short time horizon, but funds and banks with a multi-year view may not be so worried by short-term fluctuations. We expect 2019 net annual demand in the carbon market to be around 278 million tonnes, some of which will be covered by fuel switching, but more than 200 Mt will be taken from the built-up cache of allowances after a decade of oversupply. That trend should put upward pressure on prices in the long term, prompting emission reductions.

It seems almost inevitable that the price of carbon will be volatile in 2019 and 2020. The market will be short on an annual basis, but there is still enough surplus in the system for compliance. The concern is that most of those permits are held by utilities for hedging purposes and buy-and-hold financial institutions with a multi-year horizon. In addition, allowances held by compliance entities might be held by players unwilling to sell, such as nervous industrials that decide to stockpile fearing further price increases in the future.

If all over-allocated companies decide to hold on to their surpluses, short participants will have to scramble to avoid paying a fine of €100 for every one tonne of CO2e. In that case, they would likely either have to reduce their output (which for some risks carbon leakage) or enter a bidding war with other companies in the same situation. Reducing emissions without cutting output is not an option for most industrial installations in 2019.

Our view is that less industrial selling could lead to higher prices and dramatically increase the probability of price spikes. EUAs could even spike to €40 or above if companies with surplus allowances decide to hold on to them – assuming no selling from speculators or utilities, or intervention from the European Commission.

It is possible that the Commission would intervene by adding more supply if the price moves too much too fast. The EU wants a market with a high enough price to drive abatement, but it would be counterproductive if the price gets so high that it hurts European industry by driving production to regions with higher emissions permitted per unit produced – or even no carbon constraints.

The most immediate risk is a no-deal Brexit, which would have the UK crashing out of the EU ETS on the divorce date. The 2018 compliance deadline for UK installations was moved forward to 15 March 2019. Then, on 11 March, the UK decided to extend it by 11 days in a breach of the regulation, and then again to 29 March once it had agreed a Brexit extension with the EU. All these changes have heightened uncertainties and mistrust toward the UK by the other 27 member states.

A precipitous Brexit has the potential to drive prices back down below €15 in the worst-case scenario – for instance, if Brexit is disorderly from an economic point of view, and UK companies engage in a sell-off. We believe it is more likely that large international companies will keep most of their allowances in the continental registry rather than dumping them on the market, limiting the downward pressure.

A short-term Brexit delay would postpone issuance of UK allowances until a deal is made. It’s likely that the UK government would try to avoid the marking of 2019 allowances if the country stays in the EU ETS for one more year, and we believe the EU would concede a similar arrangement to the one for 2018 compliance. A ‘No-deal’ scenario would have the UK crash out of the carbon market with immediate effect.

Other factors could also impact the carbon price. We expect increasing volumes of LNG to enter the European market as North Asian gas (JKM) is now trading at a discount to Central European gas (TTF), when discounted for shipping. Low natural gas storage led to an extremely tight 2018 for the European gas market. That has changed. A loose natural gas market and lower prices means there will be increased fuel switching in Europe at lower carbon prices. We expect this to lower emissions by around 50 Mt in 2019 almost irrespective of the carbon price, counteracting some of the impact the market stability reserve will have in the short term. 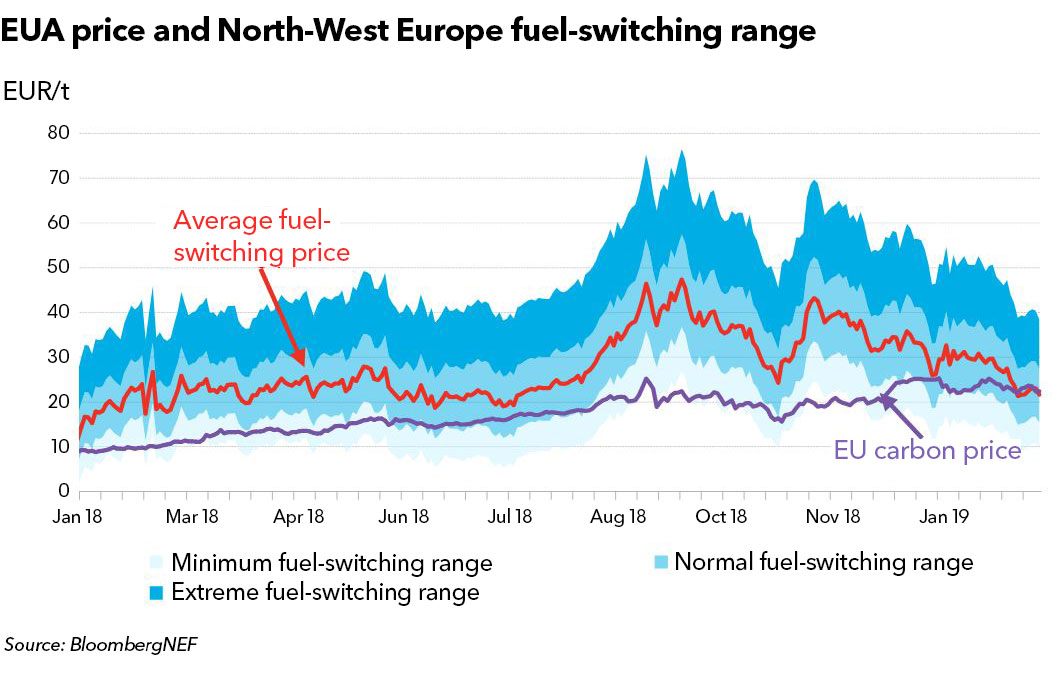