Renewables made a record contribution to global grids in 2021, but coal-fired power and emissions jumped to new highs, according to BloombergNEF’s Power Transition Trends

London, São Paulo, September 21, 2022 – The world’s wind and solar projects combined to meet more than a tenth of global electricity demand for the first time in 2021, according to research company BloombergNEF (BNEF). At the same time overall electricity demand, production from coal-fired power plants, and emissions all surged in 2021 as the global economy regained its footing following the Covid-19 pandemic.

Michael R. Bloomberg, UN Secretary General’s Special Envoy for Climate Ambition and Solutions, and Founder of Bloomberg LP and Bloomberg Philanthropies, said: “New spikes in coal generation are a troubling sign for the economy, our health, and the fight against climate change. This report should be a rallying cry to leaders around the world that the transition to clean energy requires bigger and bolder actions, including actions that empower nations that have contributed the least to climate change – but bear many of its worst consequences – to make progress tackling it.”

With nearly 3,000 terawatt-hours of electricity produced, wind and solar accounted for a combined 10.5% of global 2021 generation, BNEF found in its annual Power Transition Trends report. Wind’s contribution to the global total rose to 6.8% while solar climbed to 3.7%. A decade ago, these two technologies combined accounted for well under 1% of total electricity production. In all, 39% of all power produced globally in 2021 was carbon free. Hydro and nuclear projects met just over one quarter of the world’s electricity needs.

“Renewables are now the default choice for most countries looking to add or even replace power-generating capacity,” said Luiza Demôro, head of energy transitions at BloombergNEF. “This is no longer due to mandates or subsidies, but simply because these technologies are more often the most cost-competitive.”

Solar continued to expand at a particularly fierce pace in 2021, both in terms of new capacity additions and new markets. Solar was half of all global capacity added, at 182 gigawatts. Its contribution to global grids topped 1,000 terawatt-hours for the first time. Solar has also become essentially ubiquitous. In nearly half of all countries tracked by BNEF where some capacity was added, solar was the top choice in terms of volume. At least 112 countries now have at least one megawatt of solar capacity installed. 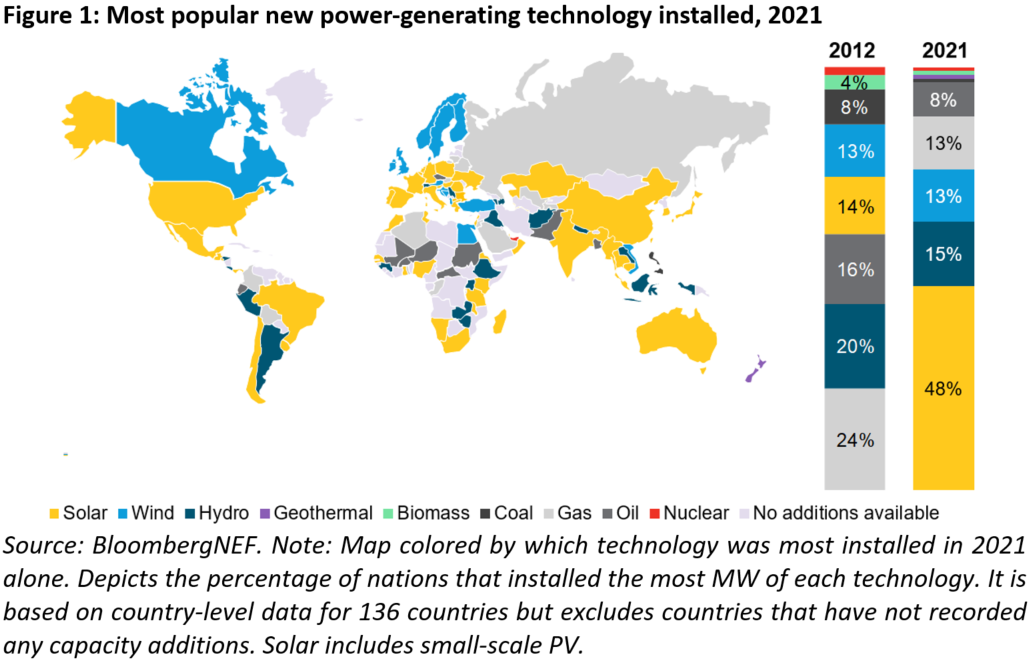 Despite the incredible inroads renewables have made, the Power Transition Trends report paints a stark picture of the enormous work that remains for the power system to address its role in climate change. As the global economy recovers from the Covid-19 pandemic, electricity demand surged 5.6% year-on-year, putting new strains on existing infrastructure and fossil fuel supply chains.

Lower-than-expected production from hydro plants and higher natural gas prices also helped put coal-fired power back in the spotlight in more markets. Production from coal plants set records by jumping 8.5% from 2020-2021 (up 750 terawatt-hours on a net basis), to 9,600 terawatt-hours. Over 85% of that generation came from 10 countries, with China, India and the US alone accounting for 72%.

Meanwhile, countries continued to complete constructions of new coal plants in 2021, and coal still accounts for the single largest share of global capacity at 27%. One small bright spot: the speed at which new coal is being added to the grid is slowing. Just 13 gigawatts of new coal-fired capacity was completed in 2021, down from 31 gigawatts in 2020 and 83 gigawatts in 2012.

Nonetheless, the result was a commensurate 7% spike in global CO2 emissions from the power sector in 2021 compared to 2020. Power-sector emissions set a new high at 13,600 mega tons of CO2, BNEF estimates.

“It was a year of highs and highs, for the best and worst reasons,” said Ethan Zindler, head of Americas at BNEF. “Renewables grew very fast, but coal’s comeback and the fact that countries – including those that have pledged to achieve net-zero emissions – continue building coal is really disconcerting.”

BNEF’s Power Transition Trends report was produced in partnership with Bloomberg Philanthropies and will be officially released at the United Nations Climate Action: Race to Zero and Resilience Forum in New York today. The full report is publicly available via the following link.

About Bloomberg on Climate
Led by Michael R. Bloomberg, a global climate champion and Special Envoy to the UN Secretary-General on Climate Ambition and Solutions, Bloomberg Philanthropies and Bloomberg L.P. are tackling the climate crisis from every angle. Bloomberg Philanthropies is at the forefront of U.S. and global efforts to fight climate change and protect the environment, bringing together mayors and other government and business leaders, grassroots partners, and environmental advocates across a key array of issues. These philanthropic efforts are accelerating the transition from coal to clean energy, improving air quality and public health, advancing city and local climate action, protecting and preserving ocean ecosystems, and helping unlock billions of dollars in sustainable finance. At the same time, Bloomberg L.P. is providing the global financial community with data-driven insights, news, and analysis to help integrate an ESG lens across the investment process. As a company, Bloomberg L.P. is also leading by example, including committing to 100% renewable energy by 2025 and taking action in the communities where its employees live and work. And through Bloomberg’s stewardship of the Glasgow Financial Alliance for Net Zero and the Task Force on Climate-related Financial Disclosures, Bloomberg is using the power of the capital markets to address climate change and support the transition to a net-zero economy.