Bullard: We Really Can’t Live Without the Internet

The internet came to life 50 years ago last week, with a simple message sent from the University of California, Los Angeles to the Stanford Research Institute. The system crashed only two characters into the transmission of the word “login”: SRI received only “lo” — “as in ‘lo and behold!’” in the words of UCLA’s Leonard Kleinrock. The UCLA terminal operators’ logbook, with its record of “Talked to SRI host to host,” is the internet’s birth certificate.

Five decades later, half the world uses the internet. It took almost the entirety of human existence for half the world’s people to live in cities. It took 27 years for the global population on the internet to grow from less than 1% to more than 50%. 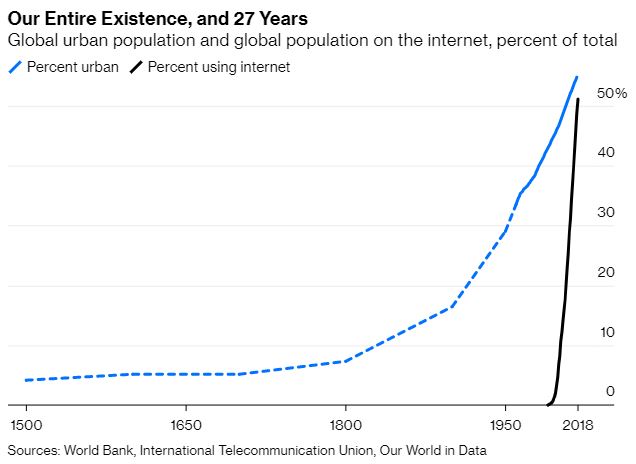 It’s hard to imagine contemporary government, finance or media running without the internet. The internet, and with it the process of digitizing businesses and economies, is now a matter of national focus in dozens of countries.

Earlier this year, my BloombergNEF colleagues analyzed 40 national industrial digitization strategies. They then ranked countries based on the ambition of their digital efforts, the alignment of public- and private-sector goals, and the capital, workforce and technology employed to digitize at greater scale. Of the top 10, four countries are Asian, and four are European.

BloombergNEF’s analysis identifies key commonalities between the countries that have been most successful in using internet-enabled technologies, such as the internet of things and artificial intelligence to make domestic industries more globally competitive. The most successful models align private-sector goals with national digital policies that focus on a few strategic areas. Digitization is not just for wealthy economies (the top 10 include Singapore, with a per capita GDP of $94,000, and China, with a per capita GDP of $17,000), but the skills gap is a concern everywhere. And every country fears falling behind in artificial intelligence strategies, even the perceived leaders such as Germany, the U.K. and Israel.

There’s another thing that worries newly digitizing countries: information and communications technology infrastructure. For most of the emerging markets BloombergNEF analyzed, building the infrastructure to allow connectivity and internet access is the crucial first step. That ICT backbone, as BloombergNEF calls it, is not just as important as reliable electricity, but it’s also inextricably linked to it in developing countries. Highly distributed, increasingly renewable power in emerging markets depends upon ICT to integrate with the electricity network and carry out transactions between buyers and sellers off the grid. That same ICT network depends upon reliable power to operate.

Today, neither network can live without the other. And no country’s digitization strategy will work without these networks being integrated and reliable. In the developed world, electricity was a precursor to the internet; in the developing world, both networks are growing together. Many countries that are building both networks simultaneously are layering their digitization strategies on top as well. This combination of networks and strategies will be crucial for all economies to grow and adapt, be they already rich or still emerging.