BloombergNEF’s new Digital Innovation Score (web | terminal) assesses the progress of the world’s largest utilities. It has been published alongside a utility strategy profiles report (web | terminal) which analyzes the digital practices of utilities in Europe, Asia and America.

BNEF’s Digital Innovation Score captures digital technology adoption levels and assesses how companies are positioning themselves for future innovation. It rates the 11 largest publicly listed power utilities on five metrics: management, talent, investment, technology and adoption. The performance of companies is measured relative to each other and does not indicate how they are doing on absolute terms.

European utilities dominate the top tiers of the rank, led by Enel, EDF and Iberdrola. Exelon is the highest ranked American utility, on par with European peers E.ON and Engie. Meanwhile, Kansai Electric is the top-ranked Asian utility, all of which have very similar scores.

The scores highlight companies’ strengths and weaknesses in digital innovation. For example, Exelon performs very well in the technology metrics as it develops in-house software and offers it to external customers. While E.ON leads in deploying digital projects and partnerships to its business, it scores lower in commercializing in-house intellectual property. 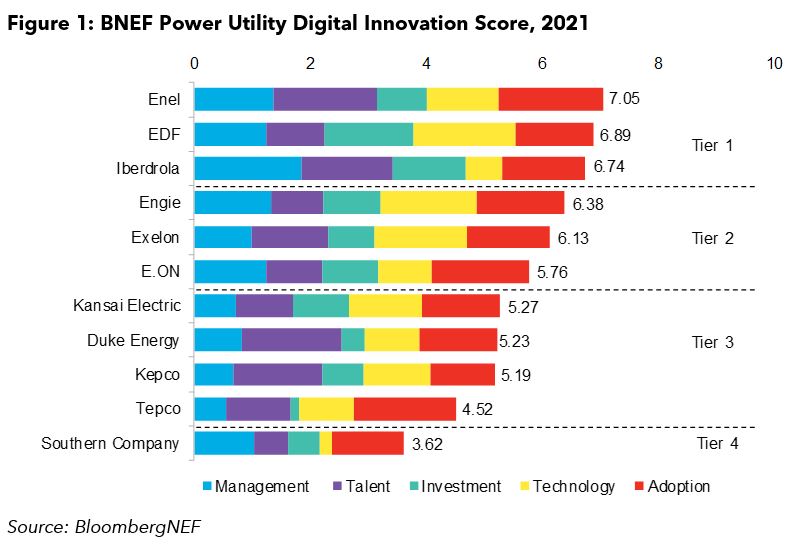 Utilities are getting creative with their digital strategies

BNEF’s digital strategy profiles report evaluates utilities’ digital strategy across four elements: the scope and range of sectors that digital technologies are applied to, the extent to which digitalization is used to create new revenue streams, the scope of partner engagement, and the level of development of in-house digital expertise.

We profiled six utilities in Asia Pacific (Kansai Electric, Kepco, Origin, SAPN, State Grid and Tepco), six in the U.S. (Ameren, ConEdison, Exelon, PG&E, SCE and Southern Company) and five in Europe (Enel, Engie, E.ON, Iberdrola and National Grid). There are two main trends that the leading digital utilities are pursuing:
• Building in-house expertise and partnerships: Utilities are growing digital expertise in-house and co-developing technology with partners including companies, startups and researchers.
• Utilities are exploring multi-sector business areas: While all utilities use digitalization to strengthen their core power business, some are also applying digital technologies to new areas, such as smart cities and buildings. 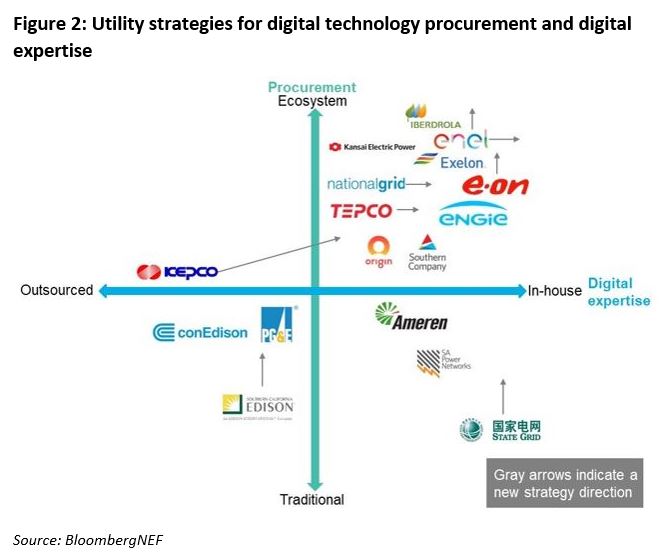 As utilities build digital expertise, they are more able to co-develop and co-research technologies with partners. For example, Kansai Electric is co-developing wireless power using radio waves with startup Space Power Technologies, and they are targeting a 2024 pilot for device charging in smart homes. Over in the U.S., Southern Company partnered with AI analytics firm mPrest in 2019 to co-develop a product for monitoring and predictive analytics on Southern Co’s distribution grid.

Most large utilities are also investing in startups, and European utilities are deploying the most capital in this area. National Grid, EDF, E.ON, Engie and Iberdrola have the largest venture capital (VC) funds. E.ON launched its VC arm, Future Energy Ventures, in 2020 with 250 million euros ($293 million). The utility also has in-house software development, and a unit dedicated to managing and assessing startup pilots. 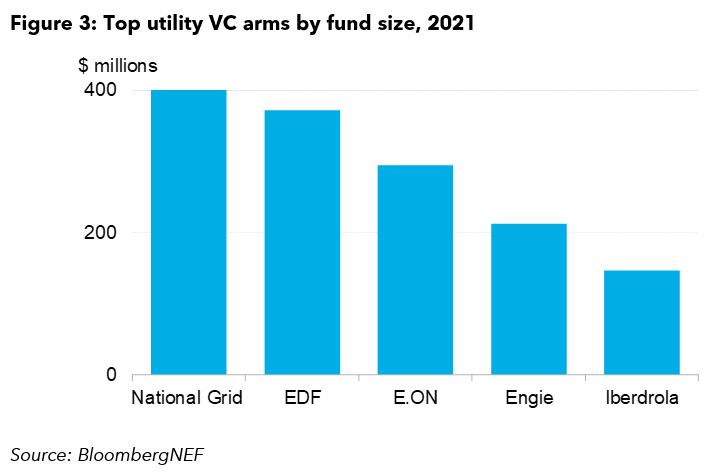 Digitalization can make money for utilities in two ways

Some utilities, such as National Grid, Ameren and State Grid, are investing in digital tools to benefit their core power business, reducing costs and improving revenue. Ameren installed smart switches to detect outages and reroute and restore power more efficiently. This reportedly helped improve the reliability of power lines and poles by 40% in 2020.

Other utilities, such as Enel, Exelon and Kansai Electric, are also developing digital products and services for external sale. Digital strategies that focus on sectors beyond power, such as smart cities and buildings, also tend to sell digital products to external companies and governments. For example, Enel subsidiary Enel X develops and sells software, such as for smart homes, smart cities and electric vehicle charging. In 2020, Enel X generated over 1.1 billion euros in revenue.