Our ability to generate, collect and use industrial data has skyrocketed in recent years as sensors, software and data science have improved. The manufacturing, energy, logistics and mining sectors will become more efficient and clean as a result of this digitalization – a process that is sparking interest in countries around the world.

BloombergNEF’s 2019 ranking reveals the industrial digitalization status of 40 countries and ranks them using metrics in investment, governance, workforce and technology. A high score indicates active digital efforts across industry and government, backed by the capital, skills and technology to scale further. The report includes full profiles for 19 leading countries, as well as analyses of strategies that can serve as models for newly digitalizing entities.

Clients can access the ‘Industrial Digitalization: National Strategies and Ranking’ report on The Terminal or on the web.

The ranking shows Europe and Asia are regional leaders. Of the top 10 scorers, four were European countries and four were Asian. Despite being home to leading technology and industrial companies, the U.S. ranked ninth. This is partially due to the absence of digital policy frameworks and other forms of government support. 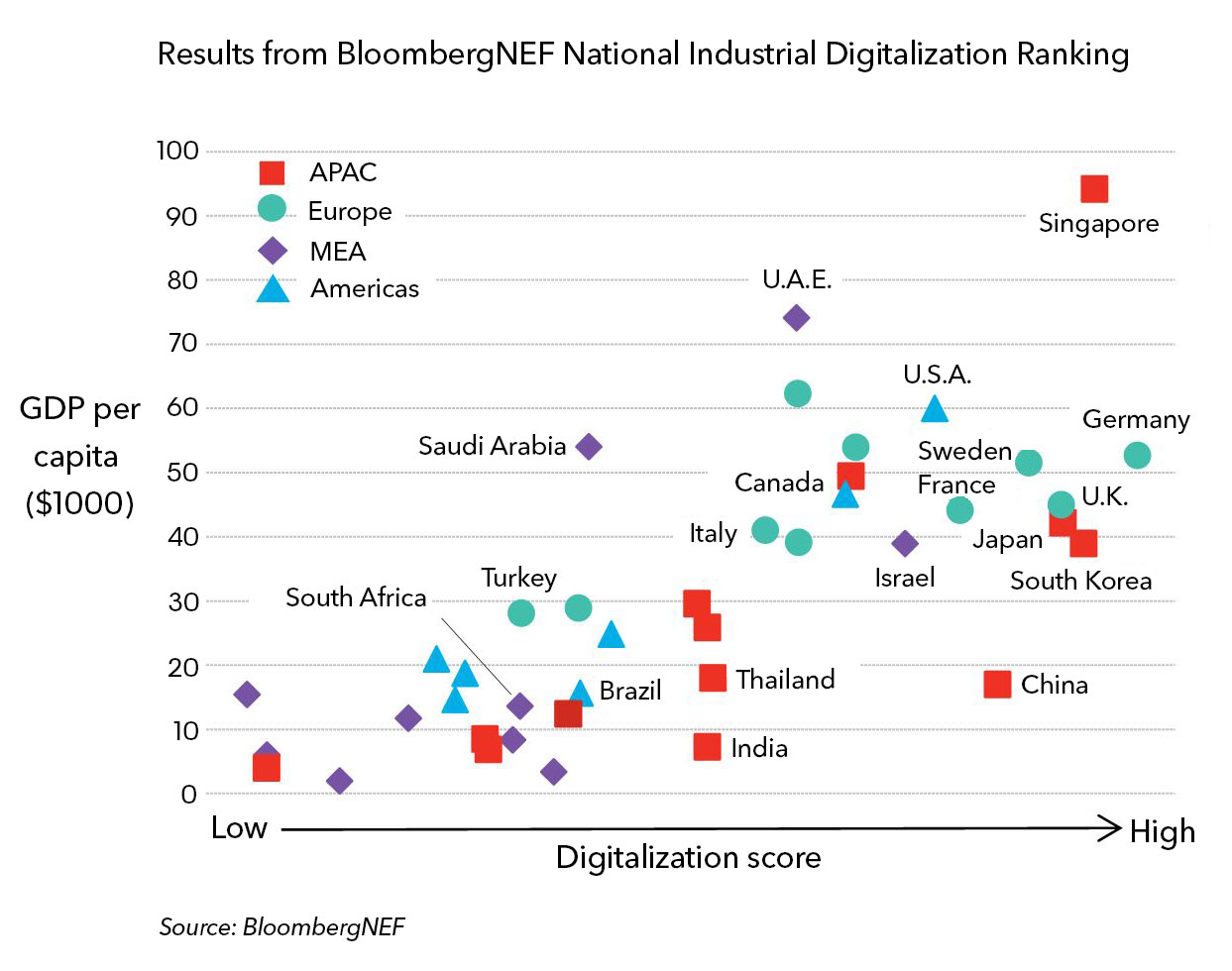 Countries now becoming interested in digitalization can learn lessons from early starters. In particular, highly-ranked countries have examples of innovative policies, investment schemes and training programs that can be replicated.

Having a national policy helps set digitalization as a priority. Focusing on a few industries helps channel resources into the most strategic areas. Of the 40 countries covered in our research, 20 have dedicated digital industrial policies and 27 have AI strategies (see chart below). 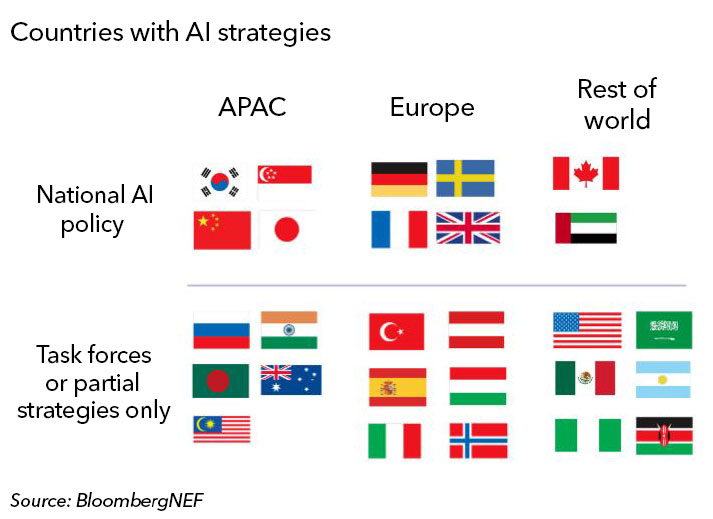 Germany, which topped the ranking, was the first to release a national digital industrial strategy. Industrie 4.0 was adopted in 2011 and has since served as an example for other countries. The policy focuses on digitalizing Germany’s manufacturing sector, particularly in automotive manufacturing, one of the country’s historical strengths. The policy’s defined scope helps Germany focus efforts on sectors where it can best extend its lead.

The strategy of Singapore, ranked second, follows Germany’s model and targets manufacturing as well. Still, Singapore is unique in providing interactive digitalization tools rather than a static policy. Singapore’s Economic Development Board released several step-by-step guides for manufacturers to start and scale digital efforts. It also provides an assessment for companies to gauge which technology areas are most valuable to address. Singapore’s government is acutely focused on the needs of the private sector and its tools target the hurdles that individual companies face.

Governments and corporations are investing heavily in the digital transformation. This comes in the form of investment into research and development, private venture funding of digital technology startups, and public-private partnerships focused on technology development, applications, and training.

In the U.A.E., ranked 16, Dubai’s Future Accelerators is an investment program in which the government highlights challenges the country faces in IoT, mobility and clean energy. It invites startups to submit proposals that are vetted for investment and implementation. This program considers a business need first and foremost, and is an effective vehicle for introducing digital innovation into government operations.

Investment in innovation hubs is another popular way to accelerate digitalization. The Industry 4.0 Testlabs in Australia, ranked 13, are scattered across academic institutions in the county. These labs provide spaces where businesses and researchers can come together to trial Industry 4.0 technologies, all while training the next generation of workers. Open-access labs provide a non-competitive place to experiment and are an incubator for innovation.

Finally, the future digital economy will require new skills in areas such as data science, AI and robotics. To prepare for this demand, many corporations have partnered with research universities to start programs in emerging technologies.

France, which ranked eighth, has taken a slightly different route and focuses on attracting the best global talent. France’s tech visa fast-tracks residence permits for technology workers who want to relocate to France. Designing new curriculums and retraining French workers is necessary but it will be years before industry sees the results. Attracting existing top talent may be faster.