How PV-Plus-Storage Will Compete With Gas Generation in the U.S.

This report by BloombergNEF shows how the combination of solar power plants and battery storage can be a clean, economic alternative to an increasingly large share of U.S. gas generation. Its analysis provides valuable insight on a techno-economic trend that lies at the heart of the future of the U.S. power sector and its decarbonization. It comes at a time where President-elect Joe Biden is preparing proposals that aim to put the U.S. on a pathway toward a net-zero power system by 2035.

The combination of ever-cheaper energy storage systems and state and federal policy support has heightened utilities’ interest in hybrid projects combining solar photovoltaics and storage (known as PVS for short). There are now over 19GW of PVS projects in the pipeline in the U.S and expected to come online by 2023, and an additional 80GW of projects in the interconnection queue. Existing projects are designed to facilitate the integration of solar on the grid, by allowing a more stable output during regular generation hours, or by shifting solar energy to deliver peaking capacity. This second application increasingly puts PVS in competition with peaking gas capacity typically delivered by open-cycle gas turbines (OCGTs).

The operating profile of the U.S. gas fleet is diverging from region to region. Gas fleet capacity factors have reached new records in power markets where gas is the cheapest and coal capacity has declined rapidly. But the story is different in markets that have recorded higher shares of renewables penetration. For example, gas generators are struggling in California. In that state, high solar penetration is eating into combined-cycle gas turbine (CCGT) operating hours and forcing these plants to start up and shut down more often, eating into their revenue and adding to operation and maintenance costs. Whilst gas dispatch is more stable in markets with lower penetration of renewables and access to cheaper gas, this is likely to change over time as economics and policy drive more renewables onto the system.

PVS has different characteristics to gas generation, but can deliver comparable services, or offer similar value. For that reason, in this report we compare these plants on an adjusted levelized cost of electricity basis when sized to perform an identical task. This approach differs from the typical integrated resource planning methodology widely adopted by the U.S. utilities. However, it allows a more accurate and direct economic comparison between these two types of technologies.

Roughly 80% of U.S. gas peakers had capacity factors below 15% in 2019. This low capacity factor results in a high levelized cost of energy for OCGTs. We sized our PVS system to perform the same job as gas plants, ensuring that they have the same value. Our results show that PVS is already a cost-competitive alternative on a levelized cost of energy basis to the majority of new gas peakers in the U.S., especially in solar-rich regions such as the Southwest. PVS is also more flexible and environmentally friendly than gas peakers. 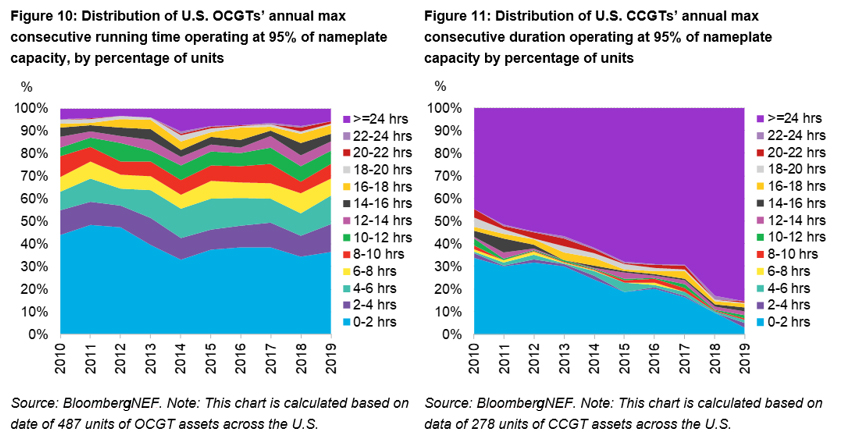 On the other hand, the number of consecutive hours for which CCGTs operate has increased over the last decade. This is largely a result of coal-to-gas switching. About 82% of units in 2019 operated at maximum capacity for over 24 hours, at least once. As a result, PVS is not yet a cost-competitive alternative to new combined-cycle gas plants, if providing an equivalent service. The need to provide energy and capacity for extended periods of time, even infrequently, makes it challenging for PVS to compete against high capacity-factor CCGTs.

However, there are nuances to this key finding of the report: 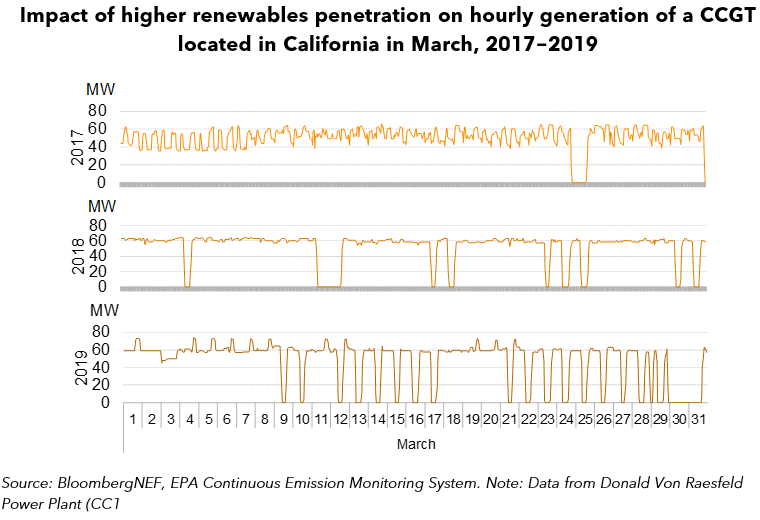 About the New Energy Outlook

The New Energy Outlook (NEO) is BloombergNEF’s annual long-term analysis on the future of the energy economy.

Now covering transport, industry and buildings in addition to its traditional focus on the power sector, NEO leverages the combined expertise of more than 65 BNEF analysts across 12 countries to offer a unique assessment of the economic drivers and tipping points that will shape these industries to mid-century, and paint a picture of the energy economy in 2050.

This study is considered an invaluable input to CEOs, investors, strategists, and policy thinkers to support long-term planning. Read the press release here.