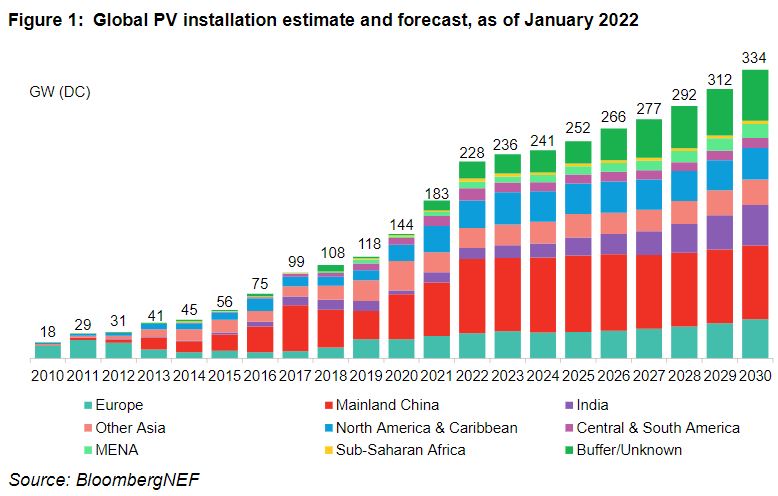 Polysilicon production has been the bottleneck in 2021. Combined with strong demand, it has pushed module prices as high as 27.8 U.S. cents per Watt for standard monocrystalline silicon, monofacial modules using 166mm cells. We expect 39% more polysilicon production in 2022 than in 2021, with total supply enough to make nearly 300GW of silicon solar products, thanks to new capacity ramping up and factory debottlenecking.

BloombergNEF’s database currently tracks 278 utility-scale PV-and-storage plants fully commissioned, with total PV capacity of 12.5GW and battery capacity of 2.7GW / 7.7GWh. We will publish a note on this in February 2022, and expect to need to revisit it frequently as the market expands.

The largest markets this year will be China and the U.S. The U.S. is already a well-established solar-and-storage market. In China, 20 provinces now require or encourage new-build renewables to pair with energy storage.

4. China’s residential and commercial / industrial rooftop solar sector will drive the country’s new build to a record 81-92GW in 2022

Since the middle of 2021, China’s central authorities have encouraged local governments to coordinate available rooftops and build small-scale PV in bulk. The bulk development pattern will assist the growth of the residential sector, particularly in rural areas, with the support of local governments.

State-owned enterprises have entered the small-scale PV market to lead the bulk development, while private enterprises with experience act as EPC [engineering, procurement and construction] or construction subcontractors. BloombergNEF expects China’s residential PV installation in 2022 to exceed a record 20GW.

In the commercial and industrial (C&I) sector, the power crunch in September 2021 allowed authorities to increase power prices by up to 20%, in order to pass on some of the coal fuel costs to users. The higher power price will make C&I rooftop PV more profitable and motivate power intensity users to install rooftop PV systems.

China has set a total energy consumption cap for each province every year to control carbon emissions, leading to power rationing and production curbs in parts of the country in 2021. At present, renewable energy is also counted with in total energy consumption. However, according to the latest state council meeting, onsite renewable power may not be counted in the total consumption quota for the users next year, meaning that installing rooftop PV could prevent production suspension. BloombergNEF expects that higher power prices and energy consumption quota exemption policy will both drive C&I rooftop PV uptake, and that new C&I installation will probably exceed 10GW in 2022.

5. Residential solar and storage becomes the default offering in more than two markets

Residential solar-and-storage will be on the political and investment agenda with greater urgency than in previous years, as it is starting to be a significant sector. In Hawaii, nearly all new residential solar systems are now built with storage; Germany, about half include storage; while in Switzerland about 15% do, and in Australia, about 5%. This figure is not available for most markets, but we expect by the end of 2022, there to be at least two further markets we know of that have more than 50% storage attachment rates.

There is little consistency between countries about rules to incentivize storage or ensure that the storage will be charged and discharged to benefit the grid, or whether solar and storage systems will be sufficient to power a house through a grid blackout. This will change in 2022.

6. Gigawatts of solar power purchase agreements will be signed in Europe

In northern European markets (Poland, Denmark, Germany), more companies and utilities will sign power purchase agreements for solar in 2022. This will also happen in Spain as the political uncertainty fades away. The Iberian market is where most of Europe’s PPA-backed PV capacity (72% or 1.4GW) came online in 2021, although the temporary profit claw back on merchant and PPAs-backed projects, introduced in September 2021, slowed down new deal signings.

In South Africa, the auction was for emergency power and was expected to lead mostly to oil and gas plant build, but awarded 1,687MW of PV, some 160MW of wind and 640MW of battery capacity to be built in 2022, as well. In India, the first auction for 2.5GW of round-the-clock renewables received 11.8GW worth of bids at an average price of $42.55/MWh in October 2021. Chile’s technology-agnostic auctions awarded 2.3 TWh of annual contracts to solar and storage projects and wind in September 2021, to be built by 2026. Israel also runs solar-and-storage tenders.

We expect at least five more countries to hold complex solar-and-storage auctions in 2022.

8. Solar manufacturing capacity will continue to grow, with new technologies joining the mix

Significant factories for new cell technologies such as tunnel oxide passivated contact (TOPCon) and heterojunction will be built in 2022. There is already over 400GW of annual capacity to make the current standard passivated emitter and rear contact (PERC) cell (>400GW by the end of 2021), which is approaching the efficiency limit of the current structure at around 24%.

Numerous plans have been announced for TOPCon and heterojunction production over the years, mainly by new entrants planning to enter the business with differentiated products, but they have not been economically competitive with mainstream products. New and significant plans by the current large cell and integrated module makers are likely to change that. Among the new technologies, TOPCon is likely to be a faster winner seeing as it is reputed to have better cost performance and is more compatible with existing cell production in terms of process, equipment and materials, which makes it easier to scale up compared with other technologies. PERC, however, will remain the mainstream product for another two to three years.

There will also be some niche products launched, particularly for the Chinese domestic market which has some support for building-integrated PV. For example, Chinese glass-free crystalline silicon-based pioneer Sunman Energy has just opened a 1GW/year factory in Yangzhong City, Zhejiang.

9. Agrivoltaics will start to be properly understood for commercial purposes

Agrivoltaics –designing solar projects so that crops can be grown underneath them –is something of a buzzword in solar circles. Sometimes agrivoltaics are just a way to get permission or subsidy to build PV on agricultural land, and supports low-yield farming (see PV + Agriculture –Not Necessarily a Good Friendship. Solar projects impede mechanical access to the ground beneath, making planting and harvest more difficult.

There are however some convincing studies that in some applications yields can be good, and some crops are harvested by hand. Players like GroenLeven (a subsidiary of BayWa r.e.) and Baofeng Group are already installing agrivoltaic systems to improve the yield of specific crops such as raspberries, goji berries, and grapes for wine making. Installers are in the process of learning which crops grow better under what system design, as there is no standardization, and even vertical bifacial projects are being considered for certain applications. We will see progress in choosing optimal applications in this space in 2022.

10. Solar factories will be announced in countries outside China, but will take time to commence large-scale production

India has by far the most significant solar cell and module production base of any country except for China (India currently has about 12.4GW of module capacity and 3.3GW of cell capacity). The government also plans to add significant further capacity from polysilicon to modules, and ran an auction in November 2021 to award 45 billion rupees ($600 million) of production-linked incentive. This was awarded to three winners, Reliance Industries, Jindal Poly Films and Shirdi Sai Electricals, which each bid to build four gigawatts per annum of module production, together with associated capacity for vertical integration starting from polysilicon.

In the U.S., the stalled Build Back Better bill contains significant support for domestic manufacturing, particularly for solar wafers where currently almost all capacity is in China, with a small portion in southeast Asia. BloombergNEF views it as highly plausible that some form of systematic support will pass for U.S. manufacturing early this year. In Europe, heterojunction specialist Meyer Burger (SWX: MTBN) plans to expand its cell and module factory in Freiberg, Germany from 400MW to 1GW this year, although production was temporarily cut in December 2021 due to employees taking time off with Covid. Meyer Burger is also planning a factory in the U.S. and is one of the most serious contenders.

Despite this, we would be surprised if a huge increase in the global share of cells and modules made outside China occurs in 2022, and expect little new wafer capacity in India, Europe or the U.S. Manufacturers are likely to be cautious to expand into an oversupplied market without solid and guaranteed demand for solar products at premium prices