The U.S. added more wind capacity than ever before in 2020. Some 16.5 gigawatts of capacity was installed – far exceeding the previous record set in 2012. General Electric was the big winner, accounting for more than half of the capacity commissioned last year. Vestas was the runner-up, also setting a company record for U.S. wind additions. Siemens Gamesa, Nordex and Goldwind supplied the remaining new capacity. 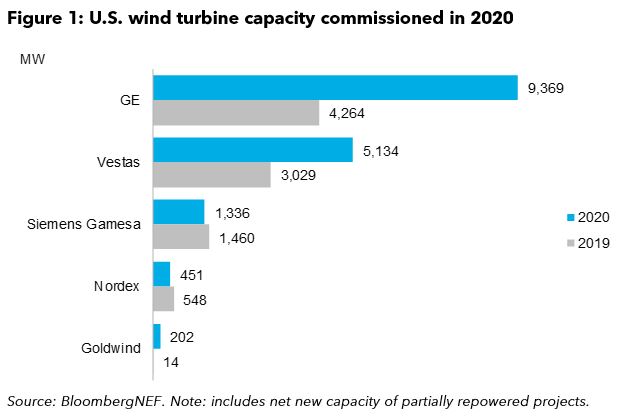 Just five companies supplied turbines for all of the commissioned capacity in 2020. General Electric (GE) supplied more than half of total new capacity, at 9.4GW. GE stretched its lead over the competition. In 2018, GE and Vestas were neck and neck, each supplying around 40% of the market. Vestas’ market share sank to 31% in 2020, although the Danish turbine maker commissioned a company record of 5.1GW across 14 states.

Despite such strong U.S. activity overall, Siemens Gamesa and Nordex commissioned less capacity in 2020 than the year before. This means that market share for both turbine makers dropped significantly in 2020 compared with 2019. Siemens Gamesa commissioned 1.3GW in 2020, while Nordex brought online 451MW.

Developers commissioned wind capacity across 25 states in 2020 (Figure 2). Texas was the busiest state by far, with 19 projects totaling 3.5GW coming online. Iowa, Oklahoma, Wyoming and Illinois made up the top five in terms of installed capacity. These top five states accounted for half of the capacity that came online across the entire country in 2020. 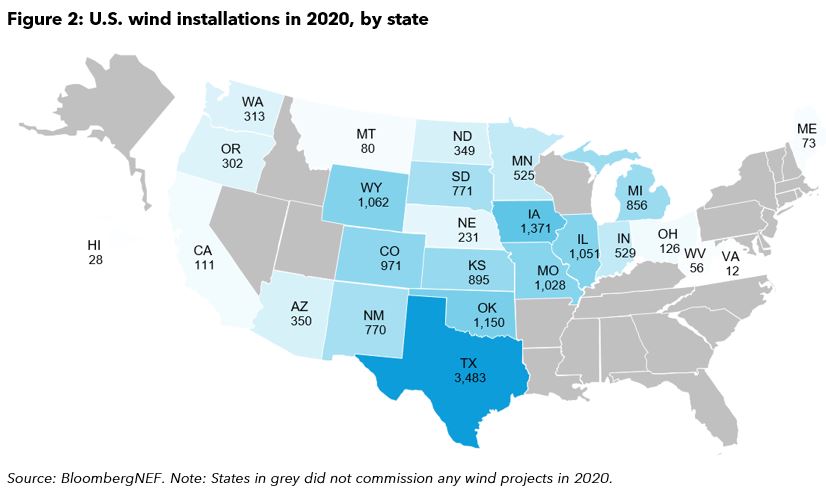 The U.S. also commissioned its second offshore wind project in 2020 – the 12MW Coastal Virginia Offshore Wind Farm. This takes cumulative offshore wind capacity in the U.S. to 42MW. BNEF predicts that the U.S. offshore wind sector will grow rapidly this decade and will be the third largest market globally by 2030 with a cumulative 23GW.