Wind power is expected to play a pivotal role in the quest to achieve net-zero emissions. While momentum was already building heading into 2022, the industry’s growth is set to be supercharged as countries look to bolster their energy security and meet more ambitious climate goals.

Corporations are also getting in on the action as they seek to adapt to the energy transition and decarbonize their operations. Oil majors such as BP and Shell are expanding their footprints in offshore wind, automaker General Motors has invested in a floating wind startup, and tech giants like Microsoft are devising innovations to make wind turbines more efficient.

Here are five charts from BloombergNEF looking at the next phase of growth for wind power.

Despite the global supply chain being rocked by inflated logistics, commodities and labor costs, BNEF anticipates a record 106 gigawatts of wind power will be installed across the world in 2022. In fact, thanks to aggressive decarbonization targets in China and a fast-growing offshore wind sector, more than 100 gigawatts of wind capacity is expected to be added each year for the rest of the decade.

BNEF’s latest numbers are higher than those published in its previous Market Outlook in December. On top of growing momentum in China, the upgraded forecast reflects the European Union’s push to accelerate wind deployments to reduce dependence on Russian gas. 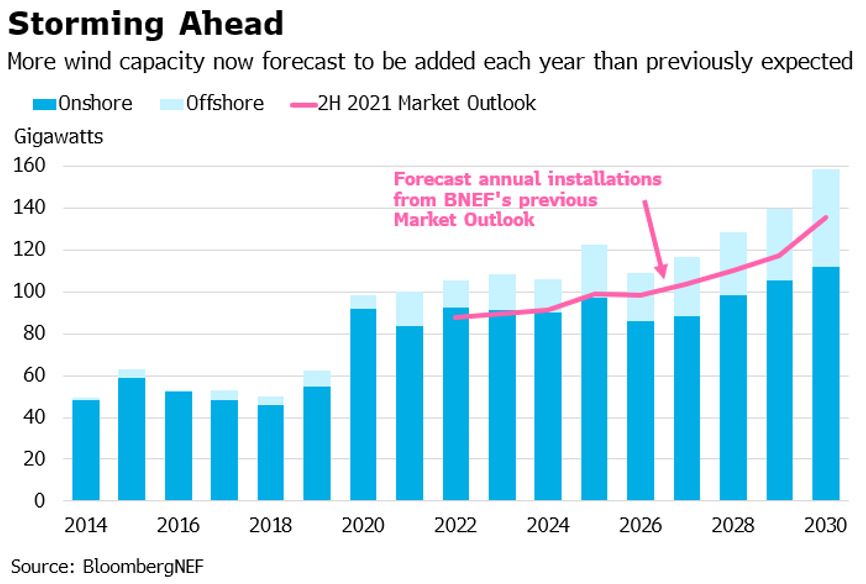 Onshore wind is set to dominate the global picture with China driving growth. China accounts for 54% of BNEF’s forecast onshore wind additions between 2022 and 2030, reflecting declining turbine prices, a push for gigawatt-scale project clusters and a concerted effort to meet the country’s climate goals.

Following a record year in 2021, offshore wind installations are anticipated to dip this year to 13.4 gigawatts. This reflects the expiry of China’s feed-in tariff leading to lower build, partially offset by expansion in markets like the UK and Taiwan.

Still, with annual additions expected to jump to over 25 gigawatts in 2025 and ramp up thereafter, BNEF forecasts cumulative offshore wind capacity will surge 10-fold between 2021 and 2035, to 504 gigawatts. 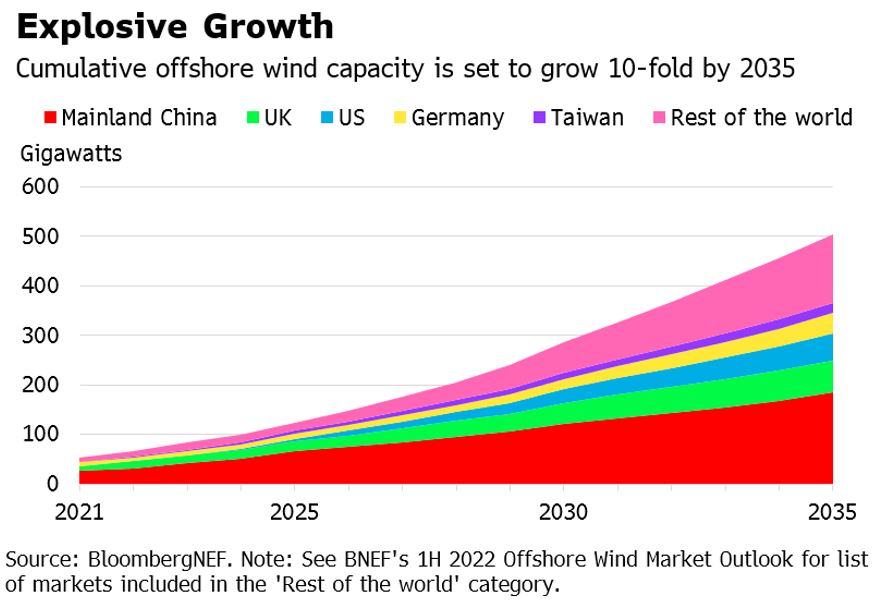 China is projected to remain the runaway leader, with more than three times the installed capacity of closest rival the UK in 2035.

Many countries have increased their offshore wind ambitions this year to curb reliance on energy imports and support net-zero pledges. However, translating these raised targets into reality will hinge on easing bottlenecks such as protracted permitting processes.

3. Turbine makers to jostle for position in the second half of the decade

Turbine makers are looking to capitalize on the offshore wind boom, hunting for a foothold in new markets and pushing technology boundaries with ever larger and more powerful machines.

Siemens Gamesa is the dominant offshore wind turbine supplier, capturing 13% of the market outside of China in the 2020s, including conditional orders and preferred supplier agreements. Vestas and GE follow, each with around a 4% share over the same period.

Western manufacturers are facing the prospect of increased competition from Chinese turbine makers, who are starting to extend their presence outside their home market. 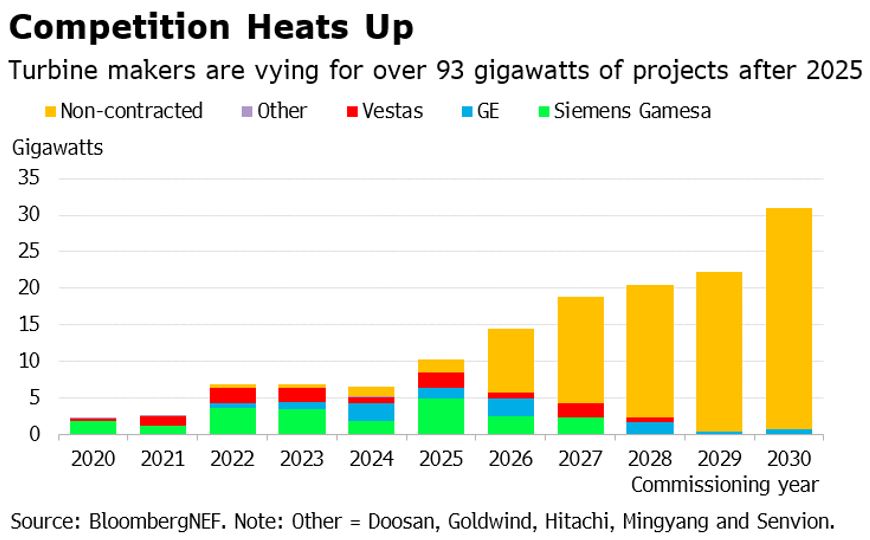 However, the second half of the decade is a different story, as over 93 gigawatts of projects due to come online outside of China have yet to contract a supplier.

4. The seabed is getting more valuable as offshore wind plans expand

Being able to build an offshore wind farm is contingent on having rights to develop in a particular area of the ocean. While markets like Germany and the Netherlands host tenders that award seabed sites along with an offtake contract, developer-led markets, including the US and UK, have separate auctions for seabed leases and offtake.

The last few months have been a hive of activity for seabed leasing. In January, the Crown Estate Scotland awarded rights to seabed leases that can host up to 25 gigawatts of offshore wind. It was the world’s first auction to offer gigawatt-scale sites for floating wind.

Meanwhile, the US held its first seabed lease auctions since 2018 for the New York Bight, an area of seabed between New York and New Jersey, and off the coast of the Carolinas. The prices seen in these auctions were more than twice those of the last lease prices in the US, with the most expensive New York Bight lease valued at a huge $2.6 million per square kilometer. 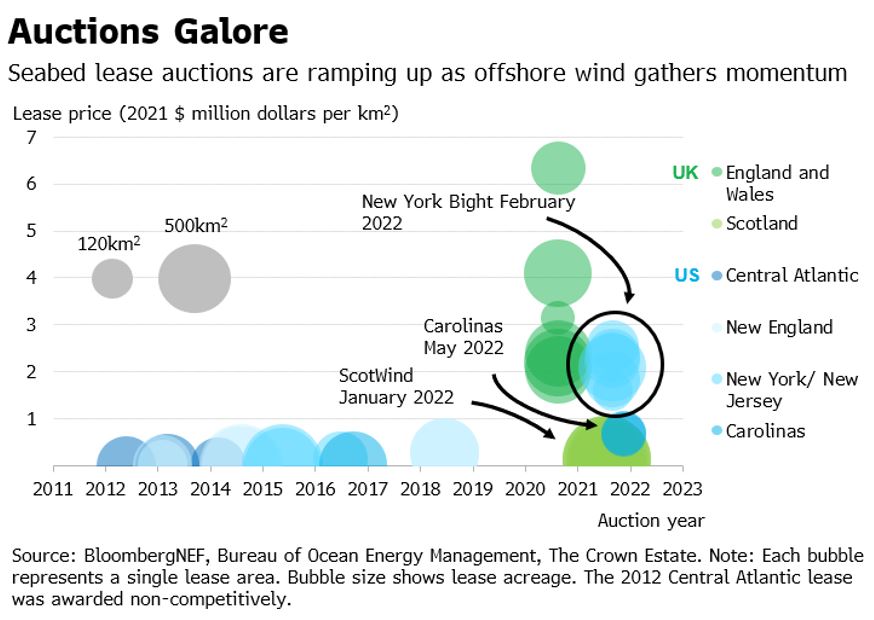 Jean-Michel points to “swathes of more seabed” set to be awarded by the US and UK over the next few years as the two countries look to expand their offshore wind capacity.

5. Markets with deep waters to tap into floating wind potential

Turbines anchored to the ocean floor with fixed foundations are expected to remain the mainstay of the offshore wind market out to 2035. However, floating wind is set for a growth spurt from 2027, driven by demand from areas where the sea is too deep for bottom-fixed installations.

“Countries with deep waters off their coast are attracting a lot of interest from renewables and oil and gas developers,” says Luisa Amorim, a BNEF wind analyst. “However, a lack of government support and clear permitting frameworks in what is still a nascent market, coupled with additional risk compared to bottom-fixed, could pose limits to the commercial-scale deployment of these assets in the near future.” 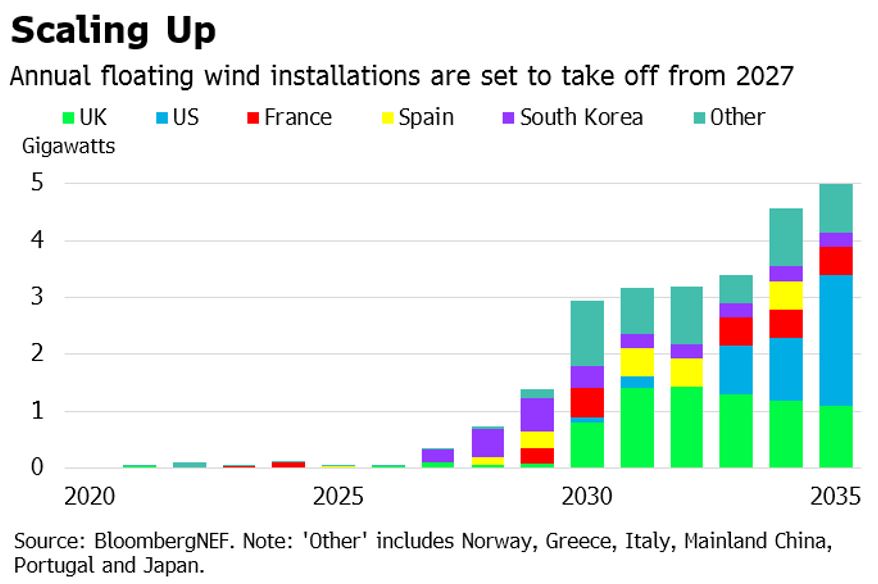 Floating wind capacity is forecast to reach over 25 gigawatts by the middle of the next decade, from just under 60 megawatts today. The UK is projected to be the market leader in 2035 with around 8 gigawatts of total capacity, followed by the US with close to 5 gigawatts.

Amorim says that in order for the floating wind market to meet this estimated growth trajectory, “it is crucial to reduce technology costs, making it ever more necessary to upscale the supply chain, increase manufacturing capacity, and address technical gaps that still exist around the export system.”