It’s been a mixed year for the race to reach net-zero emissions. While combating climate change has been near the top of the agenda, governments, companies and individuals have been more focused on how to deal with surging inflation and an energy crisis sparked by Russia’s invasion of Ukraine.

Against that turbulent backdrop, progress worth celebrating has been made. There are more electric cars on the world’s roads than 12 months ago, more solar panels and wind turbines in operation and development, and more ambitious policies have been set out – not least the landmark climate legislation passed in the US in the summer.

But we’ve also seen a dash for gas and coal in a bid to shore up energy security, a somewhat damp squib of a COP27 summit, and a series of extreme and devastating weather events that underscore the need for urgent action to slow global warming.

The pressures seen this year will undoubtedly remain in the spotlight in 2023, potentially exacerbated by recessions. Here are five charts from BloombergNEF taking stock of the energy transition and what could lie ahead.

1. Renewables are continuing to get cheaper, undercutting fossil fuels

Let’s start with the good news. Renewable energy has been getting ever cheaper to produce thanks to improved technology, economies of scale and stronger supply chains. The so-called levelized cost of electricity, or LCOE, for solar and wind projects has fallen by at least 60% versus a decade ago.

Inflation did make its mark this year as raw materials, freight and financing all became more expensive. Nonetheless, with fossil-fuel-powered generation also being squeezed by high commodity prices, renewables have retained their competitive edge.

In fact, for the first time ever, the LCOEs for onshore and offshore wind, and fixed-axis and tracking solar are now all lower than for coal and natural gas. Offshore wind finally undercut fossil-fuel plants in the second half of this year, propelled by tumbling turbine prices in China. This means that, on average, gas is now the most expensive source of bulk power generation, with its LCOE more than double that of solar and onshore wind. 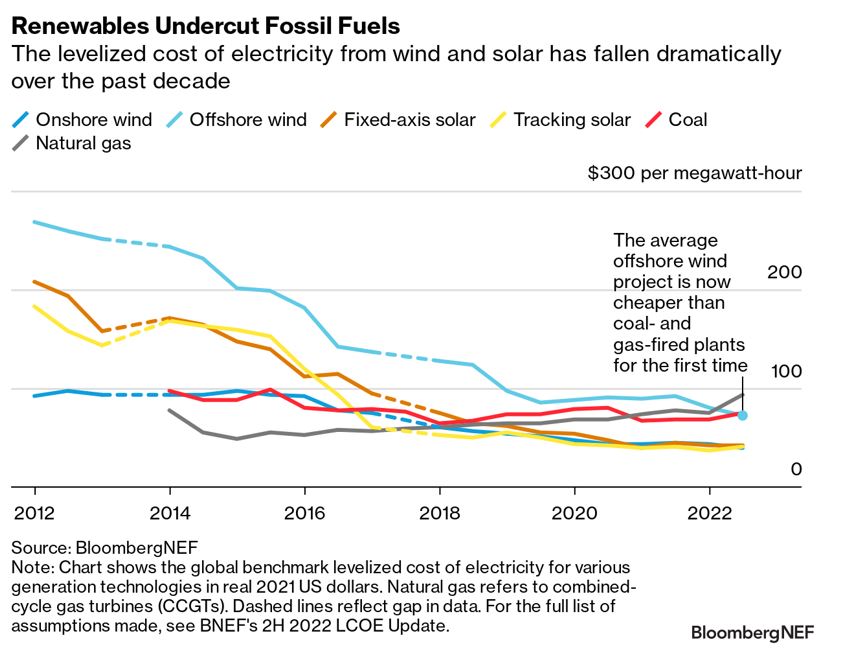 The first tipping point occurs when a new wind or solar project is cheaper than building a new coal- or gas-fired power plant – in other words, renewables are the least expensive option to expand installed power capacity or replace retiring assets. This is now the case in markets accounting for 96% of global electricity generation, with onshore wind being the cheapest source of new bulk power in the likes of China, India and the US.

The second tipping point is when renewables are cheaper than existing fossil-fuel generation assets – a threshold that has now been crossed in markets comprising 60% of global electricity generation, including Canada, South Africa and Australia, where solar is the most attractive choice.

2. Clean energy capacity is growing, but not fast enough for net zero

The ever-improving cost-competitiveness of wind and solar has seen installations boom around the world. This momentum is expected to continue as countries look to meet their climate ambitions. More good news, then

Coal and gas remain the number one and two sources of power globally right now. But BNEF’s Economic Transition Scenario – which is driven by the economic competitiveness of technologies and assumes no new policies are introduced – sees combined electricity generation from wind and solar overtaking gas in 2024 and leapfrogging coal in 2028.

However – and here’s the bad news ­– based on current trends, the anticipated growth in wind and solar projects won’t be enough to reach net-zero emissions by 2050, with the world potentially veering off course this decade without intervention.

The Economic Transition Scenario envisages almost 16 terawatts of wind and solar being in place in 2050, a sevenfold increase from today. Yet, this would still be well short of the 28 terawatts estimated to be needed to reach net zero. 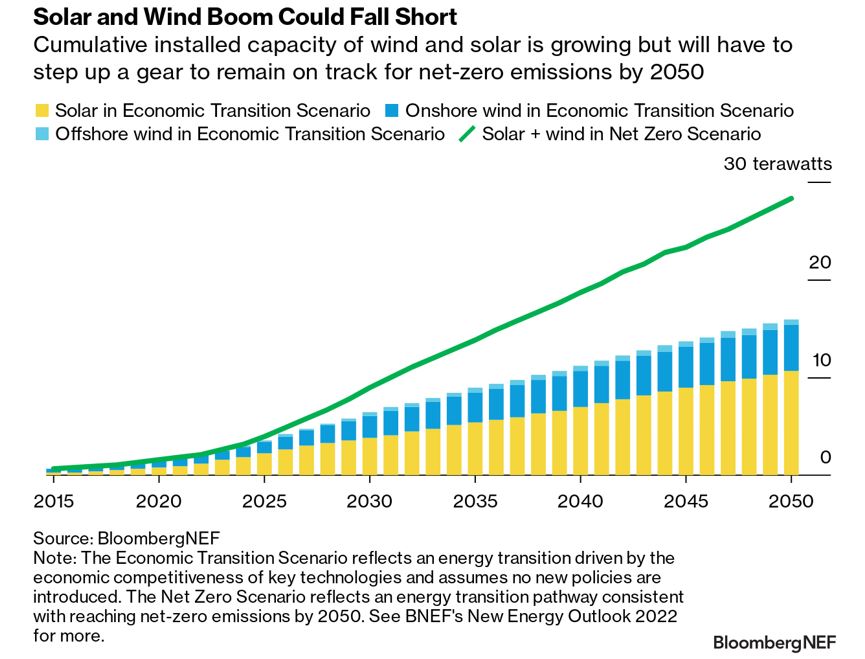 No one said that ditching fossil fuels would be easy. Europe, for example, is seeing just how difficult it is to kick a longstanding dependence on gas, particularly with winter now having started in earnest. Still, looking at the bigger picture, the growing penetration of renewables and rise of electric vehicles could see the consumption of coal and oil peak this decade, and gas use reach its pinnacle in the early 2030s.

But here’s the ugly stinger. That trajectory would only see global emissions fall by 29% between now and mid-century, with over 24 billion metric tons of carbon dioxide still being spewed out unabated in 2050. Such a pathway would put the world on track for 2.6 degrees Celsius of warming above pre-industrial levels, failing to meet the goal of the Paris Agreement to limit the temperature increase to “well below” 2 degrees Celsius. 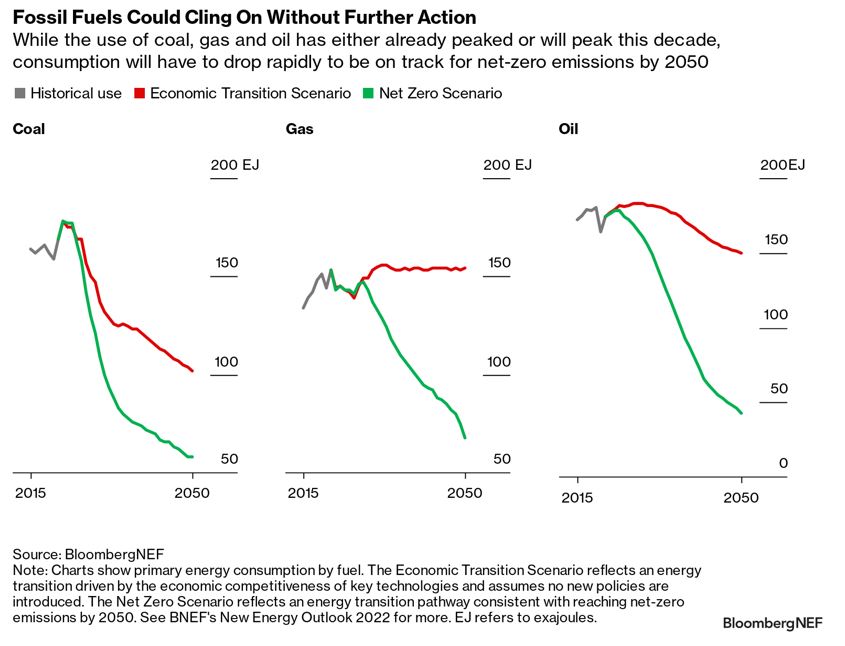 Getting on track for net zero would not only require fossil-fuel consumption to essentially peak now, but to also fall off a cliff rather than steadily decline. Making this a reality will entail a massive scale-up of decarbonization technologies across the power, transport, industrial and buildings sectors. While clean electricity sources and EVs have already made some headway, the deployment of other solutions, such as hydrogen electrolyzers, heat pumps, and carbon capture and storage, are still in the very early stages.

4. Carbon markets could be key to the pivot from fossil fuels, but prices need to rise

Carbon pricing could turbocharge the shift away from fossil fuels by incentivizing the adoption of cleaner alternatives. More countries are recognizing the value of putting a price on carbon. Close to a fifth of global emissions now fall under a so-called compliance-based carbon market, in which entities must purchase or trade allowances to cover the emissions they produce. This is up from just 5% a decade ago.

But while the proliferation of carbon markets is undoubtedly good news, mass adoption is still a long way off, and prices are mostly too low to have a material climate impact. This is especially true for sectors outside of power generation where low-carbon solutions remain an expensive proposition.

The World Bank estimates that a carbon price of $50 to $100 per ton of CO2 is required by 2030 to meet the temperature goals of the Paris Agreement. However, only the European Union, UK and New Zealand currently have prices within or above this range. In China, the world’s largest market in terms of emissions covered, prices are languishing below $10 per ton. 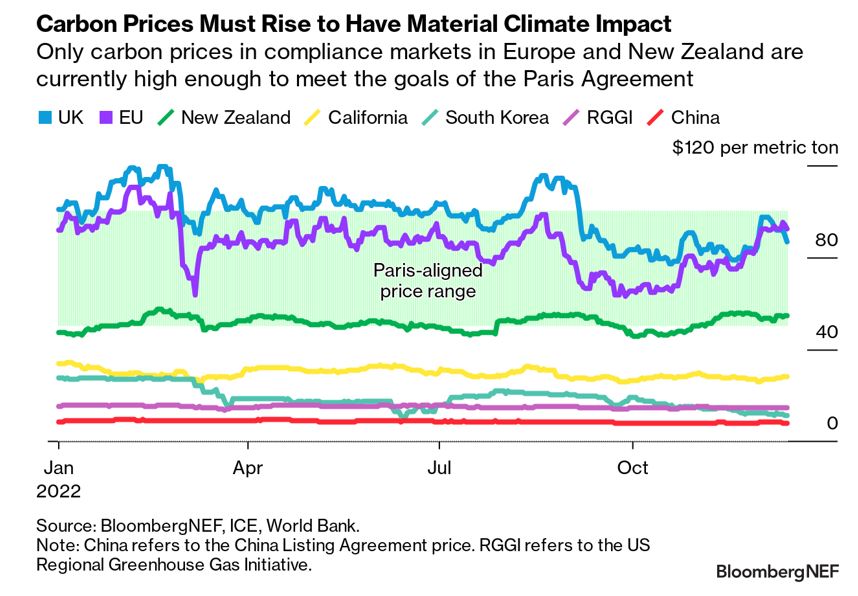 As policymakers try to balance the need for energy security with the demands of the energy transition, this has made for a volatile year for carbon prices, particularly in the EU. None of the major carbon markets have been able to sustain their momentum in 2022, and 2023 could be another year of suppressed growth as the same dynamics play out and reform efforts continue.

5. Batteries haven’t been immune to the inflation crisis in a blow to EVs

Carbon isn’t the only market to have faced turmoil this year. Thanks to higher commodity and component costs, in particular for key metals lithium, nickel and cobalt, the price of lithium-ion batteries has risen for the first time since 2010. The volume-weighted average price increased by 7% in 2022, to $151 per kilowatt-hour, according to BNEF’s annual survey.

Falling battery prices are crucial to accelerating the adoption of EVs, as well as energy storage to complement the rollout of intermittent renewables. For EVs, $100 per kilowatt-hour is the point at which they are expected to hit price parity with gasoline and diesel cars. BNEF now forecasts this threshold won’t be reached until 2026, two years later than previously anticipated. 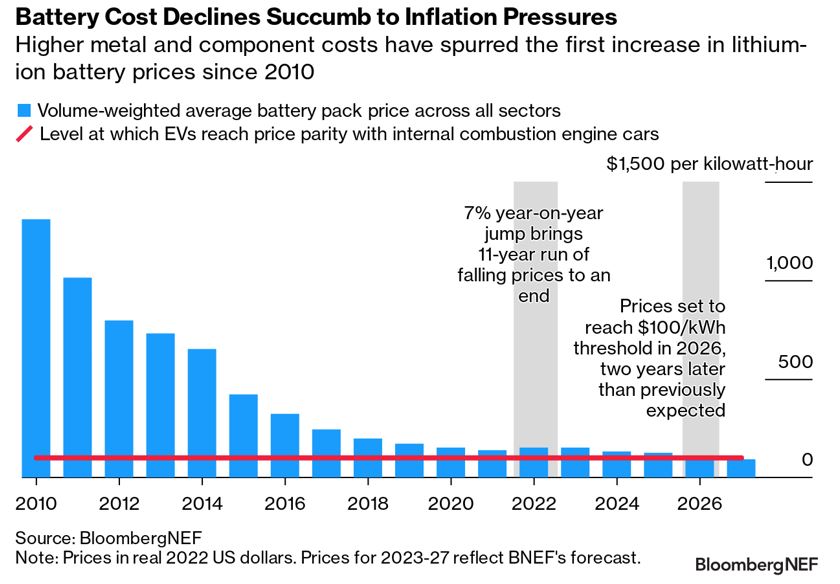 While that’s disappointing, the positive takeaway is that higher prices this year and in 2023 will likely only mark a pause rather than an end to the era of ever-cheaper batteries. Innovation and manufacturing improvements are set to maintain the overall long-term trend of decreasing costs. BNEF expects battery prices to drop by more than a third by 2027, to $94 per kilowatt-hour.