An Eclipse Is Just What the U.S. Power Sector’s Been Waiting For

Turns out the solar eclipse, set to plunge parts of the U.S. into total darkness on Monday, will offer exactly what the power sector’s been looking for: a completely predictable stage for experiments.

It’s not often that power grid operators, utilities and electricity generators get such precise and advance notice about more than 12,000 megawatts of solar power supplies set to suddenly drop off their systems. And some are looking forward to it — as a means of testing plants, software and markets refined in recent years in anticipation of the day when renewable energy becomes the world’s dominant source of power. 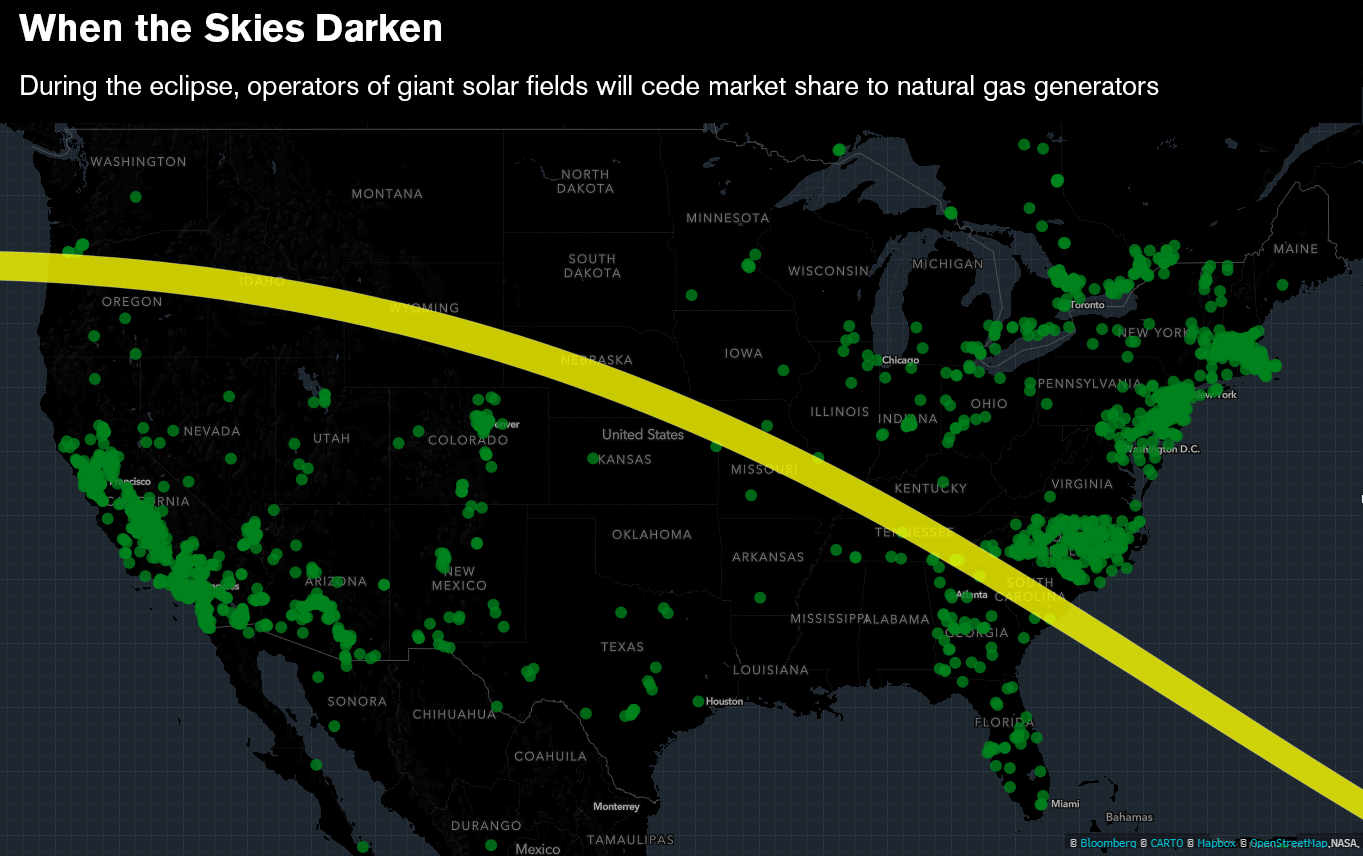 The way David Shepheard, managing director at consultant Accenture Plc, sees it: The eclipse is the “forecastable dress rehearsal” for the grid of the future. It’ll be the perfect test, he says, “for operating the grid when the sun doesn’t shine and the wind doesn’t blow.”

Here’s a closer look at what utilities, power generators and grid operators will be watching as the eclipse plays out:

Charlie Gay, director of the U.S. Energy Department’s SunShot Initiative, expects the eclipse to provide instant validation for power forecasting models being developed. The department is working with the National Renewable Energy Laboratory and grid operators to improve software controls that balance supply and demand as the continent goes dark.

“It gives us a test for the models,” he said. Using satellite data and maps of solar plant locations, the group expects to be able to match forecasts with what actually occurs before, during and after the eclipse.

Grid operators including PJM Interconnection LLC and Southwest Power Pool are similarly using the eclipse to measure exactly how much rooftop solar is on their systems and improve their supply models for the next eclipse in 2024.

The need for such software and technology has only grown as rooftop solar panels increasingly turn consumers into mini-generators. “Smart” inverters can now help balance the voltage and frequency coming from solar panels. 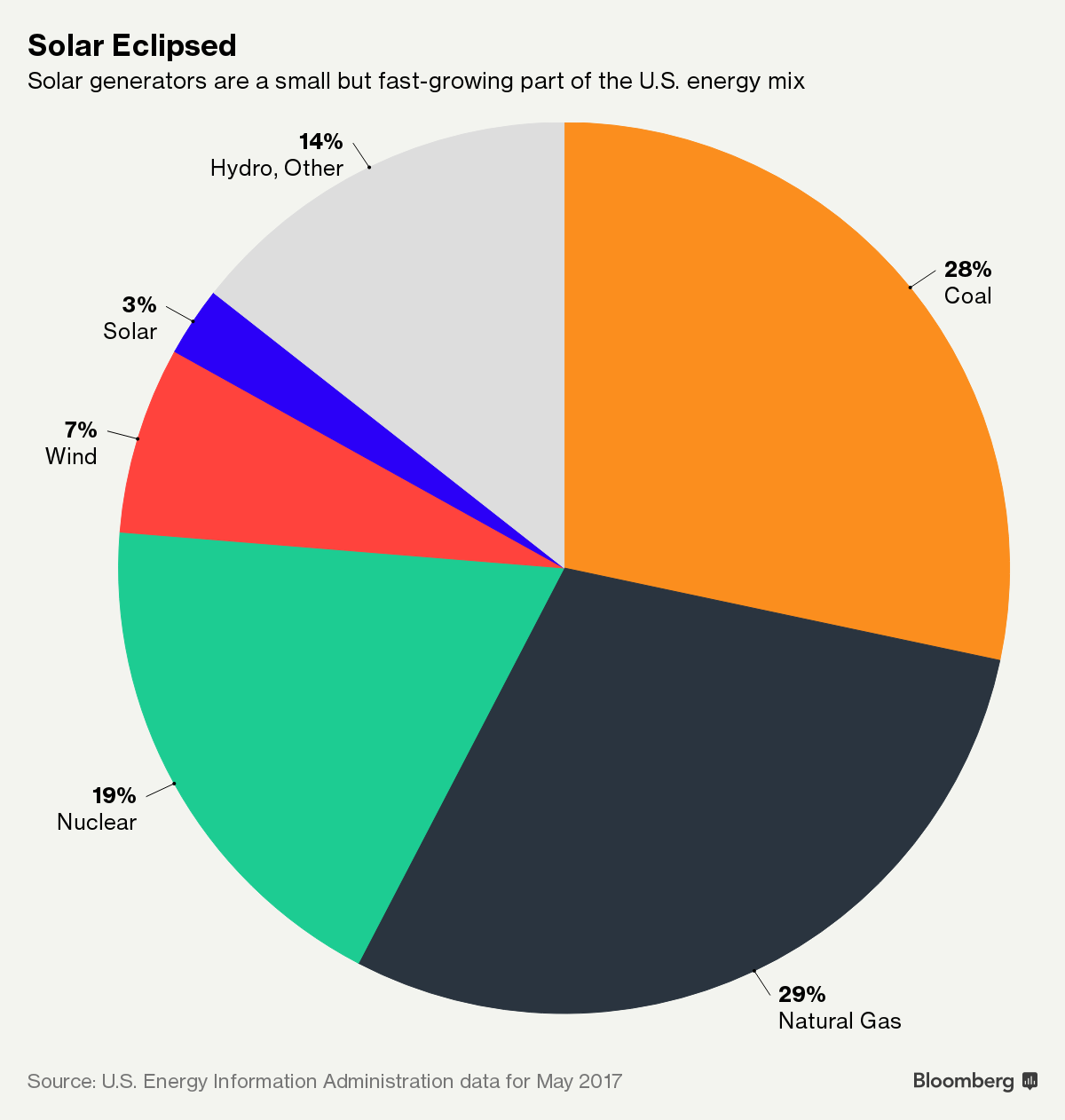 Grids and utilities “are quite frankly becoming tech companies” in their need to crunch big data to operate more efficiently, and this eclipse “is a little bit like Y2K,” said Austin Whitman, director of regulatory affairs at FirstFuel Software Inc. in Boston.

For a look at how small-scale solar is going to displace more than $2 billion worth of traditional electricity generation in the U.S., read this Bloomberg New Energy Finance report.

The event is going to give grid operators a chance to fine-tune their toolkit for dealing with big wind and solar fluctuations, the Energy Department’s Gay said. Battery storage may end up playing a bigger role because it offers more flexibility, Accenture’s Shepheard said.

Utilities including PG&E Corp. and Edison International will also be relying on natural gas-fired power plants and hydropower resources to pick up the slack when the moon blocks the sun and solar power’s wiped out.

The event is coming at an opportune time for California to flex its hydropower muscle. Snow is melting and hydro is plentiful. The flood of quick supplies is what the state is hoping to dispatch to fill a 6,000-megawatt void of solar energy.

In North Carolina, a part of which will see total darkness during the eclipse, Duke Energy Corp. expects about 2,000 megawatts, or 80 percent, of utility-scale solar farms to go offline. The utility will treat it like a “gradual sunset,” said spokeswoman Tammie McGee, estimating that as much as 1,200 megawatts of gas generation will help pick up the slack.

The so-called energy imbalance market, formed by a group of utilities and California’s grid operator to trade power in real-time across much of the western U.S., will also be put to the test. Berkshire Hathaway Energy’s NV Energy utility in Nevada said it’ll rely on this regional system, capable of dispatching power every five minutes, to help balance supply swings and set aside 400 megawatts in reserves.

Power bulls could meanwhile enjoy a rally in wholesale electricity prices due to solar’s sudden slide. The eclipse will start curbing solar a little after 9 a.m., just when the work week is ramping up and demand is taking off. According to energy data provider Genscape Inc., the event may extend the typical period of high power prices in California by about two hours.

Prices will probably retreat as soon as the moon starts moving past the sun and solar farms return, Genscape said. And the market impact in Texas, the Midwest and the East Coast will be limited because the region’s home to smaller concentrations of solar.

Transmission operators have spent years adapting to growing volumes of renewable power coursing through U.S. power lines. So they’re not anticipating outages as a result of voltage fluctuations. Utilities from California to North Carolina have also been preparing for months to avoid sudden voltage losses.

“One of the advantages of being a national leader in the amount of solar energy connected to the grid is that our operators are experienced with dealing with fluctuations in solar power production due to weather conditions,” said Paul Grigaux, vice president of transmission substations and operations for Edison’s Southern California Edison utility.

And solar’s decline doesn’t just affect high-voltage transmission lines. Utilities in California and New Jersey, where large concentrations of households have installed solar panels on their rooftops, will have to deal with fluctuating voltage levels on local power lines.

While Duke plans to follow the same procedures it always follows during sudden outages, McGee noted that the magnitude of this event “is fairly unprecedented.”