Madrid and Santiago, December 4, 2019 – Maximizing the role of solar and wind power in the electricity systems of Spain and Chile between now and 2050 will hinge on the extent to which ‘flexibility assets’ such as batteries and dynamic electric vehicle chargers are deployed and used. That is the conclusion of twin reports, published today by BloombergNEF (BNEF) in partnership with ACCIONA, the Madrid-based global renewable energy and infrastructure group.

Both Spain and Chile have world-class resources in sunshine and wind, and are therefore prime locations for the build-out of renewable energy over the next three decades. The BNEF reports model the outlook for the power generation mix of the two countries by 2050, based on various scenarios.

The reports come as negotiators from almost 200 countries – including Spain and Chile – gather for the COP25 climate change conference in Madrid, against a backdrop of urgent calls to cut emissions and keep the rise in global temperatures well below 2 degrees Celsius.

Both Spain and Chile have ambitious targets for decarbonizing their electricity systems, the former for renewable generation, and the latter for the retirement of its entire coal-fired power station fleet. But attaining these, or getting close, will require a focus on flexibility, as well as simply pouring money into increasingly cheap renewables.

‘Flexibility’ is provided by technologies that can rapidly increase or reduce the amount of electricity they deliver to the grid, depending on the balance between supply from generators and demand from businesses and consumers. Examples are stationary storage batteries, EV chargers that charge when electric prices are low rather than at peak periods, interconnectors to other countries, and – on the fossil fuel side – quick-response gas-fired power stations.

Diego Marquina, power analyst for BNEF and lead author of the Spain report, said: “We have modelled several scenarios for how the generation mix might evolve over the next three decades. This matters for investors in renewable energy, and also for emissions – because the more these countries have to rely on gas peaker plants, the more CO2 they will emit in 2050.”

Among the conclusions of the two reports are:

Read the reports on Spain and Chile here.

Chile, like Spain, has high renewables potential, and is seeing significant build-out of wind and solar. However, it has already begun to experience the challenges associated with increasing penetration of variable clean energy sources – including volatile power prices that have hit zero during some sunny hours and have been deterring investment.

James Ellis, head of Latin America for BNEF and lead author of the Chile report, commented: “To maximize the role of renewables in its electricity system, and minimize that of coal, the government should continue building out transmission infrastructure, consider introducing a robust carbon price and bring in incentives to build battery storage projects.”

Rafael Mateo, Energy CEO at ACCIONA, said: “These reports show that wind and solar are the most cost-effective forms of generation for both countries and will dominate the electricity mix over coming decades. Using energy storage, smart-charging electric vehicles and other clean sources of flexibility will give Spain and Chile the opportunity to push down both emissions and costs.”

Charts showing BNEF’s base-case scenarios for the evolution of the power generation mix in Spain and Chile are shown below. 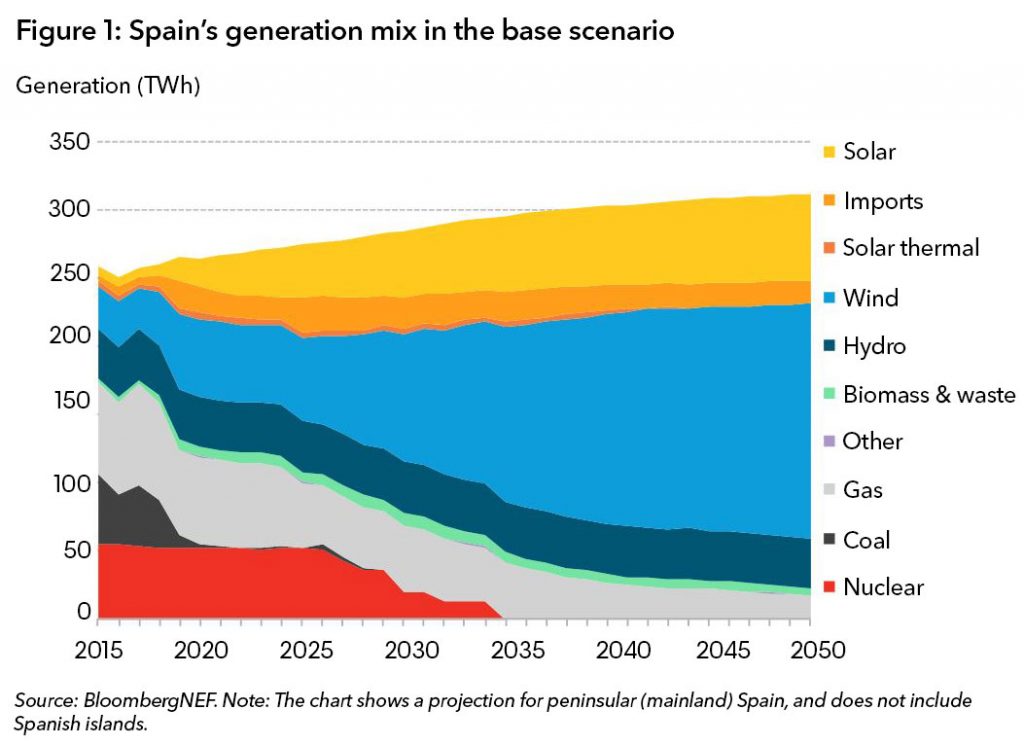 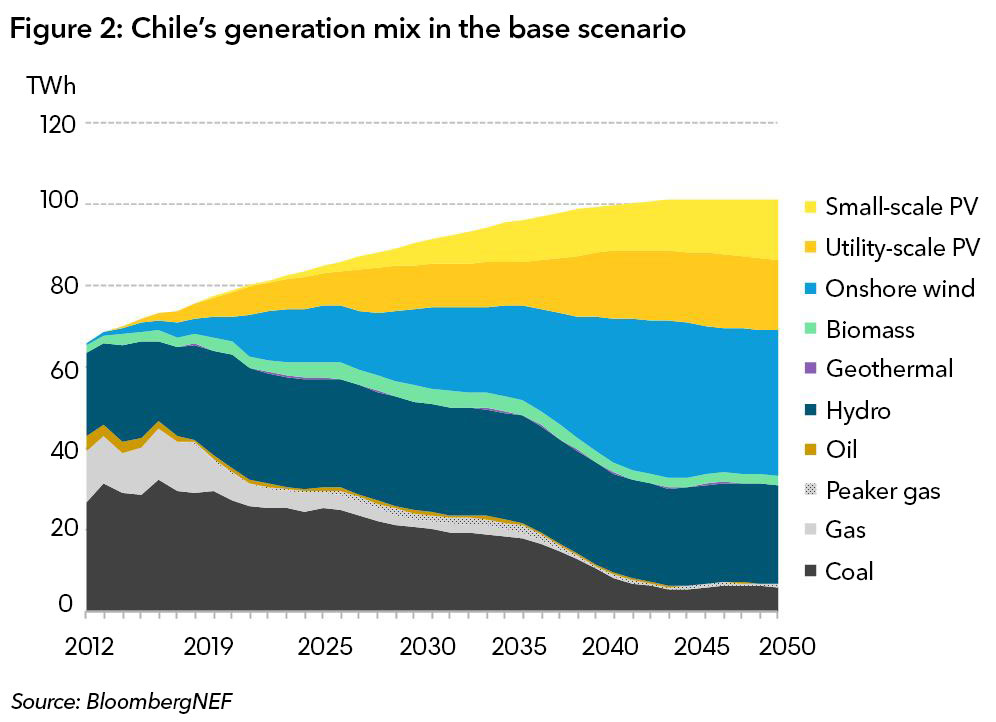