Ground zero in the global scramble for lithium is a small patch of northern Australia’s iron-ore rich outback, where work is accelerating to deliver the world’s next major mines to feed soaring demand from electric vehicle battery makers.

Almost 60 percent of supply from planned large projects through about the next five years will be added in Australia, enabling the top supplier of lithium to cement its grip on the market, according to CRU Group. The biggest mines due to enter production next year are both about 120 kilometers (75 miles) from Port Hedland, the gateway to markets in China.

Pilbara Minerals Ltd. is targeting shipments to start in the second quarter of 2018 from its Pilgangoora project and advancing work on a potential expansion. Next door, Altura Mining Ltd. says it’s on schedule to start output in the first quarter and is also preparing to rapidly boost output.

Along with nearby Mineral Resources Ltd.’s Wodgina mine — the biggest known hard rock lithium deposit — these and other projects form an emerging cluster of global production, according to both Altura and Pilbara.

If project expansions advance as planned, the region “would be the largest production center in the world,” Pilbara Chief Executive Officer Ken Brinsden said Thursday in an interview in Port Hedland. “In my mind, that could be the case by the early to mid-2020s.”

There’s been a rise in interest in recent weeks from consumers outside China, including from South Korea and Europe, also scouting for supply deals, Brinsden said. 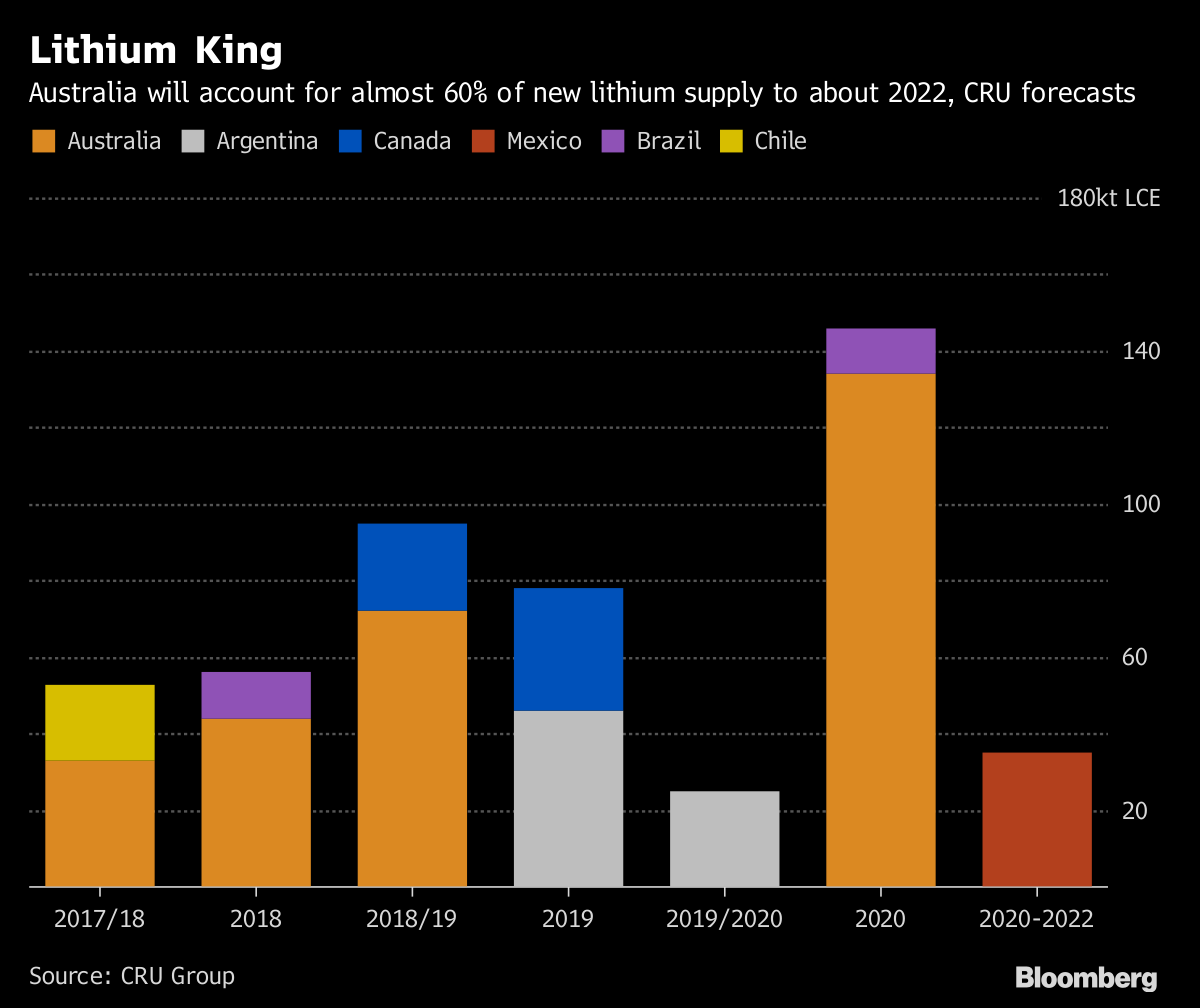 Rising Chinese demand for lithium-ion batteries needed for electric vehicles and energy storage is driving significant price gains. More than half of all new car sales and a third of the total global light-duty vehicle fleet will be electric by 2040, Bloomberg New Energy Finance said in a July report.

Even as multiple new sources of supply emerge in the longer term, Australia will remain dominant, according to Bloomberg New Energy Finance forecasts. The nation will account for about 37 percent of production in 2027, ahead of Argentina’s 18 percent share, it said in a report this month.

“Australia’s importance has been cemented by offtake deals and equity investments in mines,” Alice Yu, a Hong Kong-based consultant at CRU, said by phone. Backing from major battery manufacturers and auto producers could also see the nation add processing facilities to develop exports of higher-value lithium chemicals, she said.

Altura may seek to add further partners for a mine expansion, Managing Director James Brown said in an interview. The Pilbara “does lend itself to becoming a hub, probably the size of which the world hasn’t seen,” he said. 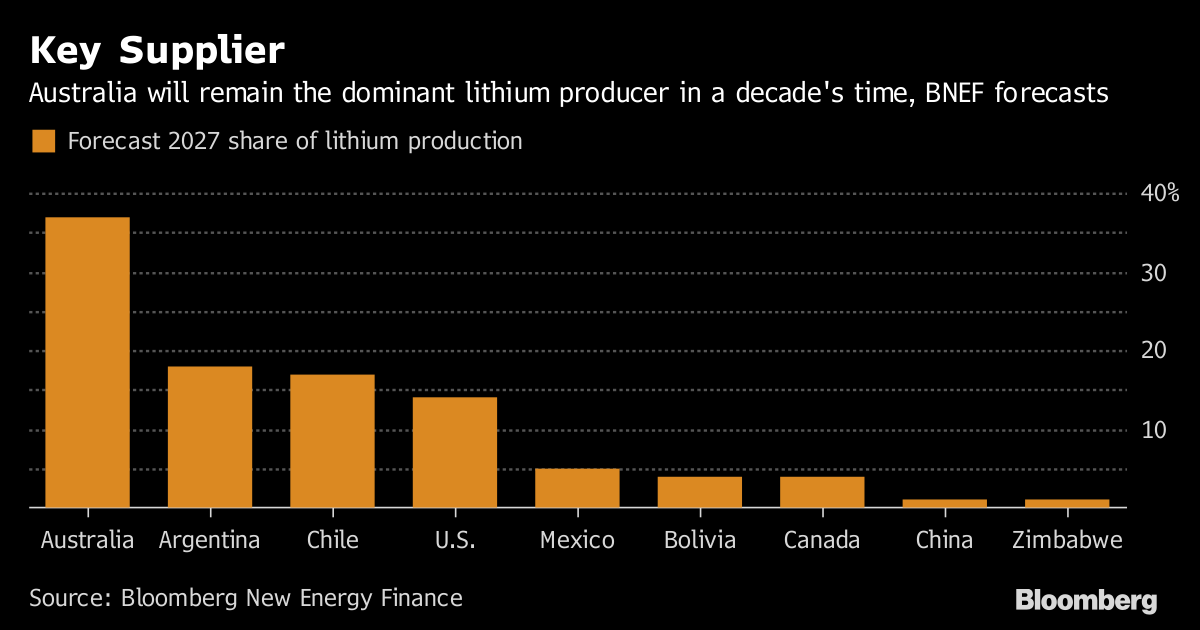 Still, Macquarie Group Ltd. has warned there’s a bearish outlook for lithium prices in the short-to-medium term as “too many Australian rock producers are crowding in” with new projects. The surge is threatening to create a period of oversupply before rising demand for electric vehicles clears the surplus from about 2021, the bank said in a note this month.

Prices stabilized in September, though remain at a high level with a lack of available raw materials, according to industry consultant Benchmark Mineral Intelligence. They may continue to rise as production probably needs to quadruple within a decade to meet demand for electric vehicles, a supply scenario that’s rare in the history of any commodity, Goldman Sachs Group Inc. analysts said in an Oct. 12 note. 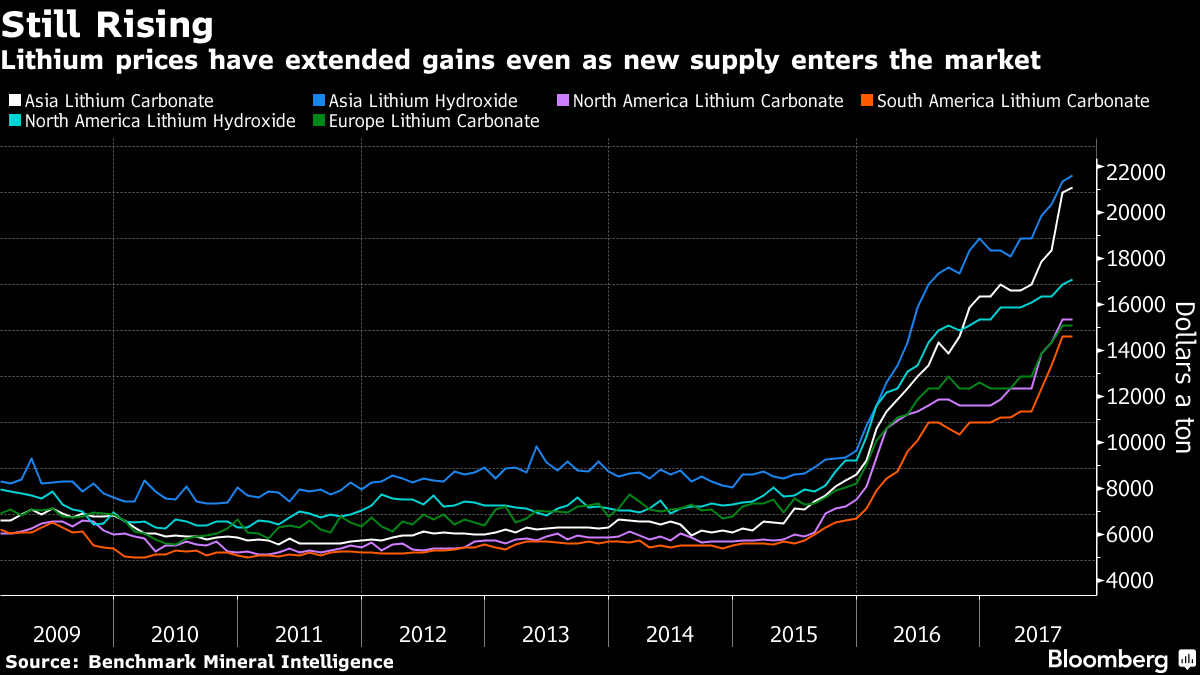 Even with a wave of new supply, including from Australia, the lithium market is likely to remain tight with a stronger demand outlook than anticipated, according to Melbourne-based UBS Group AG analyst Lachlan Shaw. “We have had increased supply this year, and all the while lithium prices have kept going up,” he said. “The market is probably underestimating demand.”

While projects that’ll be delivered by new and existing producers by the mid-2020s will help ease the current scramble for raw materials, it’s possible the lithium market may experience further periods of supply constraint in the future without continued additions to capacity, Bloomberg New Energy Finance said in the report this month.