Australia’s main goal behind the strategy is to be recognized as a high-quality and sustainable manufacturing nation. The plan focuses on supporting six industrial sectors: resources technology, critical minerals processing, food and beverage, medical products, recycling and clean energy, defense and space.

The A$1.5 billion budget will be split in the following ways (Figure 1): 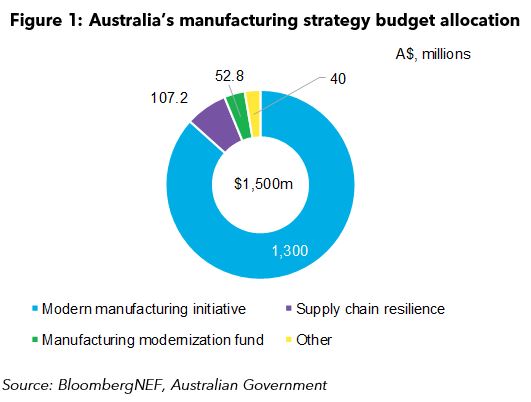 ‘Science and technology for industry’ is a key strategy pillar to back digital transformation in manufacturing. The policy specifically calls out blockchain, artificial intelligence and cybersecurity.

Prior to the launch of the new strategy, Australia’s digitalization efforts were driven by the government’s national innovation and science agenda (NISA), launched in 2015, and the tech future strategy, launched in 2018. NISA allocated A$1.1 billion over four years to boost investment, research and upskilling in public and private sectors. The agenda also established industry growth centers in strategic sectors – including advanced manufacturing, food and agribusiness, mining equipment and oil, gas and energy resources.

The strategy is a key feature of the government’s JobMaker plan announced in October, to guide Australia’s economy out of a Covid-19-induced recession. Australia’s manufacturing sector has struggled to invest in digital innovation and implement technologies quickly. This issue had been exacerbated during the pandemic, with some sectors unable to adapt in the new Covid-19 environment. With this new strategy the government aims to accelerate technology deployment by partnering industry with science and research communities.

In 2020, Australia also announced standalone, technology-specific policies. It launched a national blockchain roadmap in February, showcasing blockchain applications for agricultural supply chains and the finance sector. In August, a cybersecurity strategy was launched, allocating almost A$1 billion to cyberdefense over 10 years and hiring 500 cyberspies. The unexpected shift to working from home had led to an increased number of cyberattacks targeting critical sectors in the country.

Initiatives aimed at boosting public-private collaboration and innovation in Australia include Industry 4.0 testlabs and the cooperative research centers. Businesses and researchers can come together to trial, explore and showcase technologies, all while training the next generation of workers. The labs provide a non-competitive place to trial new innovations and act as common ground for shared learnings between government, corporates and academia.

To support technology startups, the Commonwealth scientific and industrial research organization (CSIRO) established a venture capital fund worth A$242 million. The fund was established under NISA and is supported by the government and private investors. The country has also formed a number of strategic partnerships with corporations and other governments. For example, Australia’s digital transformation agency partnered with Microsoft Azure in April, to build digital skills in the public service with cloud-technology training.

Australia’s manufacturing strategy focuses efforts on the six priority sectors where Australia already holds an advantage. To remain competitive it has identified the need to harness existing strengths in science and research. Australia does not host any of the world’s leading software and technology firms, so it has to choose between relying on international partners (as countries in Latin America and South East Asia are doing), or it must build a new set of home-grown companies (as China and Europe are attempting). Looking the policy’s focus on R&D and funding domestic startups, it seems Australia wants to do the latter. Developing domestic intellectual property can take years and requires significant investment from both public and private sectors. While there is a government funding allocated, Australia’s strategy currently lacks the detailed steps that the government will implement to achieve its goal, including any sort of timeframe.

Australia’s mining companies are perhaps the most digitally advanced of its heavy industries, already deploying digital technologies including robotics, automation and data analytics. Through the government’s collaboration and partnership initiatives, digital skills and expertise gained in the mining sector could be applied in other key sectors such as defense, space and clean energy.