By Bryony Collins, Bloomberg New Energy Finance editorial team. This article first appeared on the Bloomberg Terminal and is available to BNEF clients on the web.

Shares in development-stage mining companies offer magnified exposure to increases in prices of battery metals, as the electric vehicle and energy storage markets expand. So says Abid Mukhtar, partner at Commodity Capital, a Zurich-based company whose Global Mining Fund, with around 25 million euros of assets, returned 84 percent in the last year. In so doing, the fund regained more of the net asset value it lost during a five-year slide from 2011 to early 2016. The total of Commodity Capital’s assets under management come to just above 130 million euros.

Commodity Capital has invested in lithium producers including Galaxy Resources Ltd., Orocobre Ltd. and Nemaska Lithium Inc. – all of which have seen at least a doubling of their share prices since last July – on the back of growing demand for the battery metals that go into electric cars. Mukhtar and his team look to invest in companies where the mix of a good “management team, project economics and jurisdiction” is just right. Chile is becoming an increasingly attractive market for lithium, with companies such as Wealth Minerals Ltd. and Lithium Chile Inc. seen as interesting investment prospects, he said.

There is “rising demand versus supply” for the battery metals that go into the electric car, electric bus and energy storage industries, and hence a “forecast supply shortage”, said Mukhtar. Commodity Capital will seek to take advantage of a tightening supply market by investing in companies with a clear resource to be developed, where there is potential for an “increase in valuation as the project progresses,” he said.

Q: To what extent do you work with the lithium and cobalt mining sector?

A: The Next Generation Resources Fund is an active equity fund focused on products in the battery metals market, like lithium, cobalt or graphite, and associated base metals. The idea of “next generation resources” is that it keeps our mandate open to different types of resources that may be required in the future.

The approach we take, whether it’s our battery metals fund or our mining fund, is to look carefully at management team, project economics and jurisdiction. You can have great project economics with a great management team, but if the jurisdiction is not appropriate for resource mining in terms of established mining laws, then there is a risk it won’t work. Likewise, great project in a great location with poor management will also struggle. Our focus during the past few years has been in the Western hemisphere – so North America and select countries in South America where mining is quite established.

On the lithium side, our investments are in North America, Australia, Argentina and Chile. We look at companies like the large chemical firms such as Albemarle, development companies like Nemaska Lithium, and also exploration companies in new ground like Argentina or Chile.

Q: What is your division of interest between large companies like SQM or Albemarle, and smaller, more exploration-stage companies?

A: We look at those companies where we have a clearer path to a resource that can be developed, as we’re looking for that increase in valuation as the project progresses. We’re looking at investing in those companies, to get them into production or push them along development, as that’s where you’ll get capital appreciation.

For example, Nemaska could be viewed as a vertically-integrated chemical company, which owns its own hard-rock lithium property, in that it has built a pilot plant, and can produce lithium carbonate or hydroxide directly from this plant. Once a company shows it can get through the chemical process to make the end-product, the demand and customer base will be there.

Q: So by investing in smaller players like Nemaska, you can potentially get a better return on your capital than investing in large, diversified companies?

A: We’re invested in larger companies too – the larger the company, the more funds it has to put into infrastructure and capital expenditure. But the share price appreciation can be greater over a shorter period of time for the same capital invested, for a development-stage company over a large producer. For example, the share price of Nemaska has increased significantly over the past two years, whereas the big majors may not necessarily have a move like that. That reflects how demand for battery metals in general has shot up. 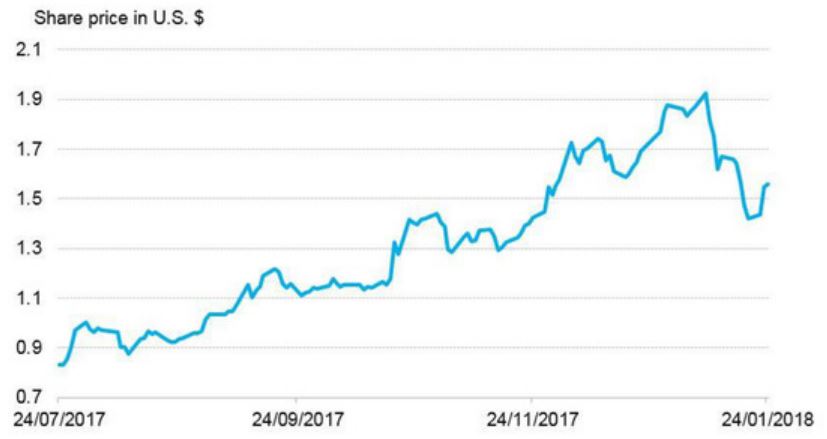 Q: What is the proportion of your investment in small players, versus large companies?

A: The proportion of our investment in juniors and exploration companies will always outweigh investment in majors. In order to add value for our investors and set ourselves apart, we want to find those companies that will go up that curve toward producer. So that means getting in with an early-stage developer or late-stage exploration company, and finding those companies with great management that has experience in the space.

We do have some holdings in companies that have progressed nicely over the last couple of years, such as Galaxy Resources and Orocobre – which just announced a strategic financing from Toyota Tsusho Corp.

Partnerships of some sort are a key point. Lithium companies need to partner with larger companies or have some sort of commitment to progress. For example, initially Nemaska Lithium had received a pre-payment from Johnson Matthey for delivery of its lithium product from Nemaska’s pilot plant, and Orocobre has an investment partnership with Toyota. It’s one thing saying you have a lithium mining project, and another to say you actually make it and have a finished product. To get to that point – to show that you can actually make a product and deliver it to the market – is very valuable.

Q: In mid-January we saw Rio Tinto drop out of bidding for a stake in SQM (Sociedad Quimica y Minera de Chile SA) of Chile. What are the options available to big mining companies like Rio to get ahead in the metals market for batteries – are acquisitions the best option, or is there risk of paying for an over-valued company?

A: Yes, it’s easier for a large company to grow by acquisition, but they have to manage that against over-paying for an asset. And that will depend on each individual asset – you don’t want to overpay for an asset unless you’ve run the numbers, and believe that the market demand in the future will offset the cost of what you’re paying for it now.

Q: Can you predict where the price of lithium will go?

A: The consensus of various industry reports forecast that lithium carbonate prices will settle around $10,000 to $12,000 per ton. It’s hard to say where it will go, a better measure is to look at the rising demand versus supply for these battery metals from electric cars, electric buses and energy storage.

Right now there’s a forecast supply shortage. If you believe the lithium market is going to increase, then that means there’ll also be an increase in demand for cobalt, because it’s used in specific types of lithium batteries, and possibly for other products as well – such as copper or nickel.

Additionally, for lithium there is a shortage of personnel who know this product. To get into production, you need to have those people with the expertise for working in that space. And that seems to be rarer at this time than for those in the precious or base metals space – where there are more professionals around with the experience.

A: One area we’ve started to look at in the lithium space particularly is Chile. A couple of years ago there was a rush into Clayton Valley, Nevada, for lithium exploration and development. There’s been some consolidation of junior companies there, and obviously Albemarle still operates there too. And overlapped with that there’s been a rush into Argentina.

Chile has a lot of experience in the mining industry – it has established mining laws, large deposits in base metals, precious metals or battery metals. So that’s definitely a nice area for us to focus on.

With respect to Chile, we’ve been looking at companies such as Wealth Minerals and Lithium Chile, and then there are the majors like SQM. The three big majors are Albemarle, SQM and FMC – they are multi-billion dollar chemical companies that have a lithium aspect through one of their divisions.

Q: In terms of cobalt mining, to what extent are you concerned about ethical mining practices?

A: We try to steer clear of the Democratic Republic of Congo. Again, based on the parameters of management, project economics and jurisdiction – in this case jurisdiction becomes an issue. Whether its cobalt, copper or gold, we would much rather make an investment in, for example, Nevada than the DRC, from a jurisdictional point of view. Like the same way we would prefer to invest in a company operating in Chile versus Venezuela. This is simply an issue of government stability and established mining laws. Our investments in cobalt are currently in projects based in North America.