Major oil companies are joining Silicon Valley in backing energy-technology start-ups, a signal that that those with the deepest pockets in the industry are casting around for a new strategy.

From Royal Dutch Shell Plc to Total SA and Exxon Mobil Corp., the biggest investor-owned oil companies are dribbling money into ventures probing the edge of energy technologies. The investments go beyond wind and solar power into projects that improve electricity grids and brew new fuels from renewable resources. 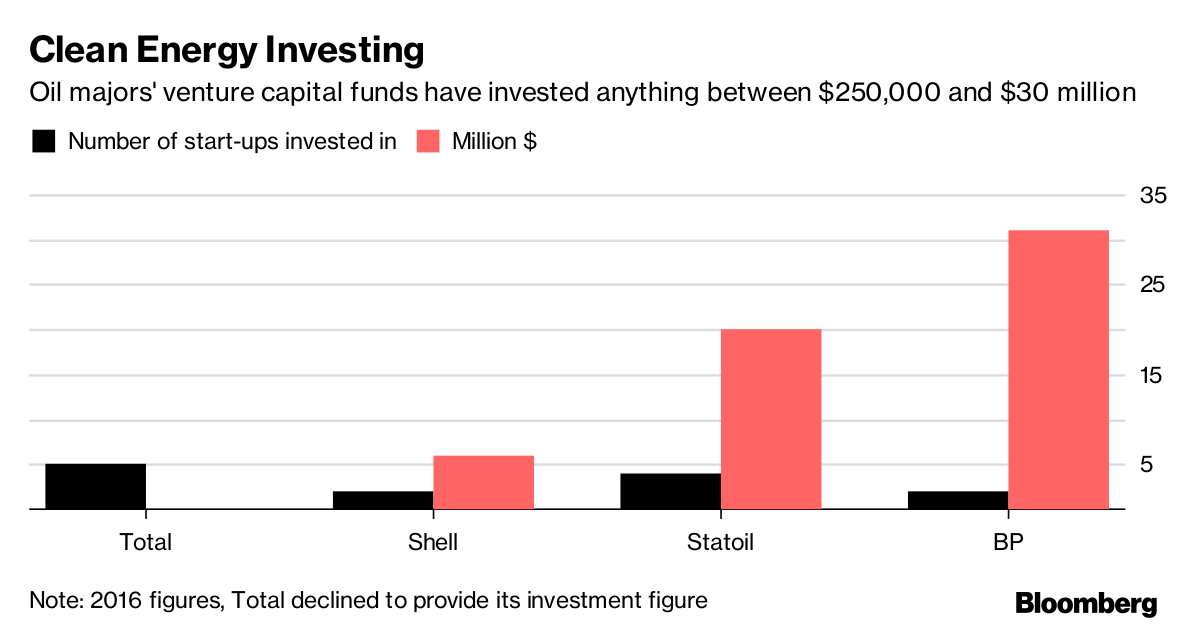 While the money involved is small — a fraction of the $7.5 billion that venture capital and private equity injected into the clean energy industry last year — the funds support work that may evolve into major income streams in the decades ahead as governments work to limit fossil-fuel pollution and global warming.
“In the energy industry, small companies have quite a lot of disruptive power,” Geert van de Wouw, managing director of Shell Technology Ventures, said in an interview. “We always have to look over our shoulder to make sure that we stay ahead of the game.”

Following is a list of the projects the biggest oil companies are supporting:

The unit of Royal Dutch Shell Plc splits its spending between oil and gas technology and clean energy equally. The green share may increase to about 60 percent in the years ahead, according to van de Wouw, declining to detail his annual budget. The fund’s total size is “hundreds of millions of dollars,” he said. It has put money into: 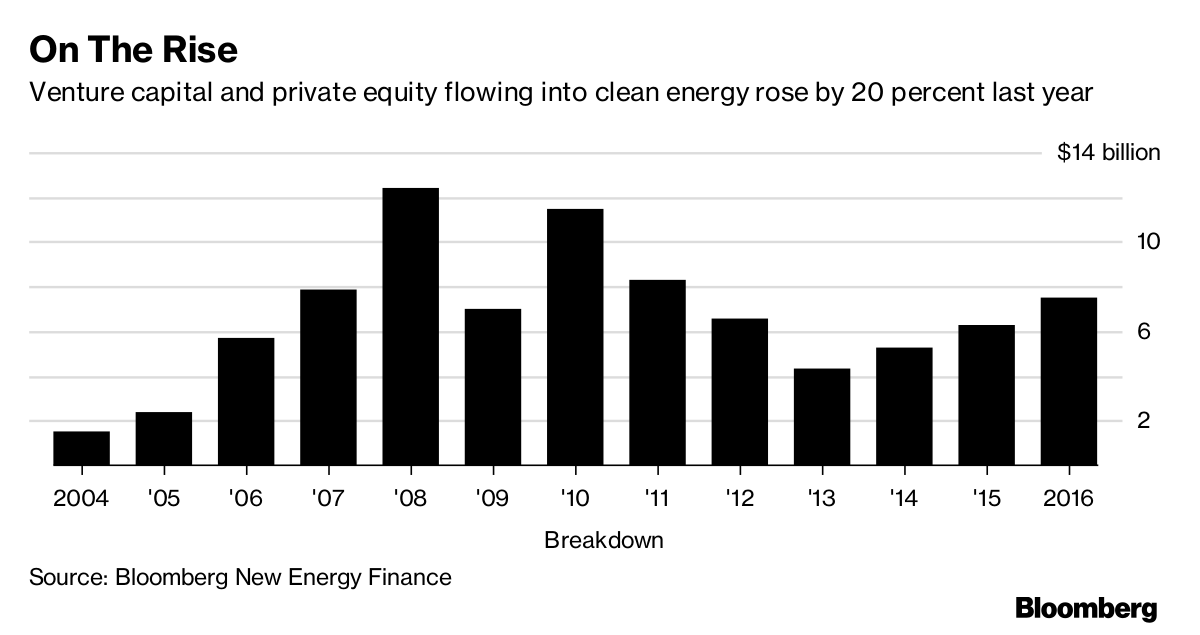 The unit of the French oil major Total SA has invested $160 million to date with almost three quarters flowing into North America, according to the fund’s CEO Francois Badoual. It only takes minority stakes. It has invested in:

“We try to detect and invest in innovation,” Badoual said. “The shift can accelerate at a pace which is difficult to really foresee, but you have to be ready and to adapt.”

BP Plc’s VC fund has invested $325 million to date. It tends to skew more towards chemicals or fuels, rather than renewable electricity. It has funneled money into:

“BP Venture’s goal is to be both an investor and an end-user of the technologies in which we invest,” said Jonathan Tudor, managing director of the fund. “That requires a longer-term commitment because we look beyond a quick financial return. We take an active role in the evolution of these companies and want to see their new technologies commercialized and deployed into BP’s existing businesses.”

Exxon has a different approach to frontier technology. It prefers to conduct research internally and with partners rather than buy minority stakes in start-ups. It’s studying biofuels, carbon capture and storage, energy-efficiency processes and energy-saving materials, according to spokesman William Holbrook, and is working with:

“We conduct R&D through in-house efforts, via partnerships with other industries and by funding academic and other nongovernmental research projects,” Holbrook said by email. “These studies help inform the company on emerging technologies, define our potential contribution to the science, and assess the future applicability of the technologies to our businesses.”

Chevron has been investing in start-ups since 1999 and divides its portfolio between oil and gas, advanced materials, communications infrastructure and information technologies and emerging and alternative energy. On the latter, it has invested in the following:

The fund “serves as a window and an on-ramp” for emerging technologies, said Chevron spokesman Kent Robertson by email. The technologies are “well aligned with projected energy needs.”

The unit of Norway’s state oil company, Statoil ASA, has invested $20 million since February 2016. It only funds renewable start-ups, listing among its investment themes wind, solar, storage, transportation, energy efficiency and smart grids. To date, it has put money into:

“In the transition into clean energy, it’s not clear who would be the winners and losers,” said Bala Nagarajan, investment director at Statoil Energy Ventures. “So for us, the investment is a means to understand which business models and which technologies are likely to be more successful. These investments help us position ourselves in the right part of the value chain.”

Of course the oil companies have always dabbled in other forms of energy, backing solar after the 1973 oil crisis. Exxon backed nuclear power in the 1980s. Shell vowed to push into renewables ahead of the landmark Kyoto Protocol on climate change in 1997.

Those efforts fizzled when dips in the oil price sharpened the industry’s focus on costs. More recently, Shell has taken big stakes in offshore wind projects, BP revived its wind business and Total pressed into solar through an investment in SunPower Corp.

Big Oil’s push into venture capital adds to the sense that technology is moving rapidly in the energy industry, leaving a question mark over what will dominate supply for the first time in almost a century.

“A lot of these companies are still figuring out how to get involved on a larger scale,” said Rick Wheatley, head of leadership and innovation at Xynteo Ltd., a consultant that advises Shell, Statoil and Eni SpA on sustainability and long-term planning. “They invest in start-ups to learn and to demonstrate intent. For the cost of a drilling campaign, they can invest in dozens of start-ups.”