Electrification is about more than just automobiles. Every new deployment of batteries and motors is a new opportunity to explore transportation in a different way — seeing them not just as vehicles, but as jobs to be done.

The reason we hear mostly about electric cars is that a lot of cars in general are sold every year. Just last year, 84 million vehicles were sold worldwide. That’s nearly double the number sold in 2000, and half of all sales were in Asia, up from 18 percent in 2000.

Even though electric vehicles are a small portion of that total, it’s a fast-growing set of the global market. As my colleague Colin McKerracher noted on Twitter, the first million electric vehicle sales took two decades. Getting to the next million mark was a blink of an eye in comparison.

Focusing only on cars, though, misses the full range of transportation modes that are being electrified.

In September, electric bus maker Proterra Inc. broke its own record for driving range, with one of its buses clocking more than 1,100 miles in one charge. That’s nearly four times the range of its own vehicles in 2015, but at less than three times the increase in battery size (and it is a giant battery; at a capacity of 660 kilowatt-hours, it is almost seven times larger than the biggest Tesla vehicle battery).

An even bigger battery was tested by two Swiss companies, though, and in an even bigger vehicle. The companies retrofitted a 110-ton Komatsu mining dump truck with a 700-kilowatt-hour battery and an 800-horsepower electric motor. The battery alone weighs 4.5 tons. The conversion cost more than $1 million, but it offers two advantages to both owner and operator. The first is that it replaces emissions from diesel combustion with (potentially) lower emissions from electricity generated at a power plant. The second is that full electrification of the drivetrain also allows the vehicle to recharge the battery using regenerative braking. As the truck descends into the mine, it generates 40 kilowatt-hours of energy — and it makes that descent 20 times a day.

This range of electrification paths suggests a different framework for thinking about the future of transportation. Clayton Christensen, the father of disruption theory, has just that framework: jobs to be done. It states that companies become “too focused on what companies want to sell, rather than on what customers actually need.” What customers need isn’t a product; what they need is to do a job, and they hire a product or service to do it.

Using that framework, vehicle electrification looks less like a set of unique applications (or gimmicks) and more like a useful way to get jobs done:

And if those are the sorts of jobs that vehicle electrification can do, then there is one more electric vehicle worth considering: the electric bicycle.

Christensen’s colleague Horace Dediu was kind enough to share his data on electric bicycle sales with me, and it is data that should make any automobile maker pay attention. In Europe, more people now buy electric bicycles than buy mopeds:

Crossed over
European sales per modes of transportation 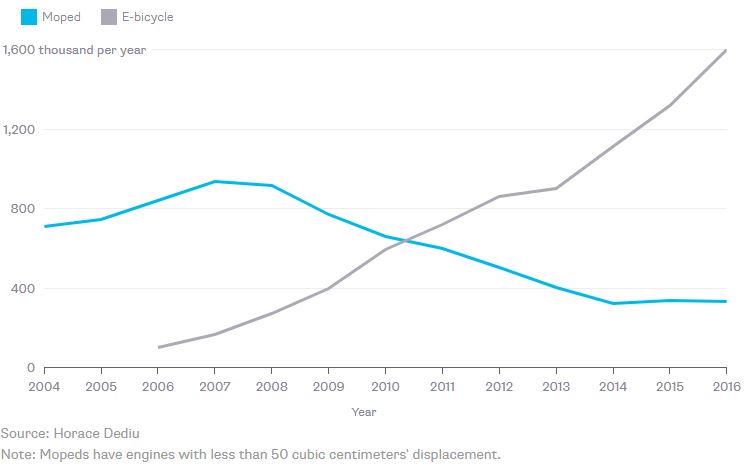 And this year, consumers worldwide will buy more than 4 million e-bikes: 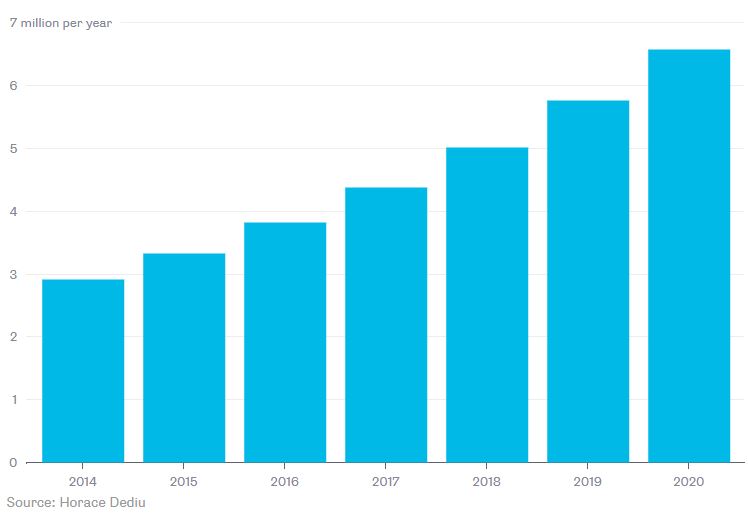 If the job is to “move people quickly,” then an e-bike is quite capable (so is an electric skateboard). If the job is also “do so quietly, flexibly, and in a way that offers a bit of exercise, too,” then an electric bicycle might be more capable than an automobile in many cases and many places. “Bikes are eating cars,” Dediu says, in cities that have embraced them as a way to do the job.

Cars — and buses and dump trucks and scooters and bicycles — are products that result from a mix of technical and marketing decisions. View them as jobs to be done, and they might look very different. The job isn’t “be a car” or “be a dump truck”; it is “move people and things according to abilities, constraints, needs and desires.” Electrify vehicles, and some of those jobs could be done better. Doing them better could mean many more electric vehicles, of all sorts, on tomorrow’s roads.