Among the revelations in OPEC’s just published World Oil Outlook — including, as Gadfly’s Liam Denning has explained, long-term demand for oil and shale production — is a notable change in the cartel’s assumptions about passenger cars. The Organization of Petroleum Exporting Countries expects 137 million fewer of them on the road in 2040 than it did just two years ago.

Admittedly, OPEC still expects a lot of cars – more than two billion of them – but that’s 6 percent less than what it predicted in 2015. 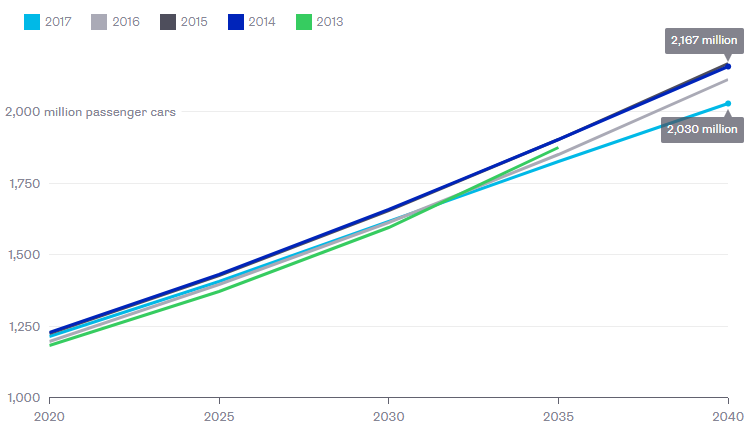 OPEC also lowered its projection for the global electric vehicle fleet in 2040, to 235 million from 266 million — a 12 percent drop. That’s about 300 million fewer electric vehicles than my Bloomberg New Energy Finance colleagues expect in the same year. 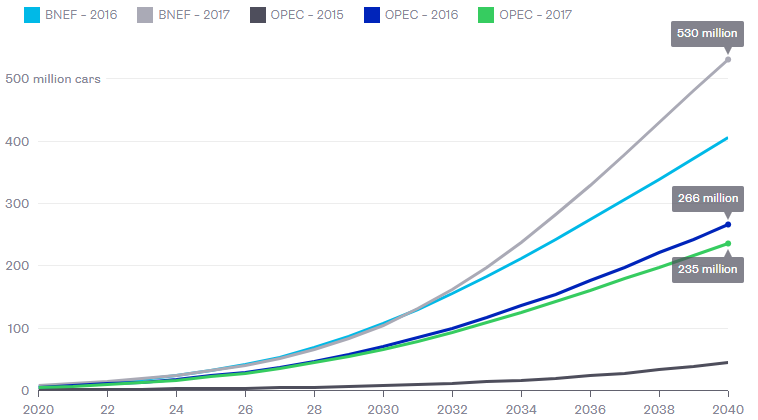 OPEC expects smooth and steady electric-vehicle growth of 2.7 percent a year, about the same rate the market has been experiencing. Of course, it’s relatively easy (and safe) to create models that look like an extension of present market behavior; it’s much harder (and riskier) to model change.

That’s not to say smart thinkers cannot imagine a weird and different future. OPEC’s Outlook authors offer no explanation for why they expect fewer passenger cars. But other people’s predictions and observations fill in the picture.

Consider, for example, the role that autonomous vehicles are expected to play. Alphabet subsidiary Waymo is now testing fully autonomous vans on public streets – vans with no humans at the wheel. Such vehicles are bound to have accidents, however rarely. And societies may be tempted to wait for perfection before rolling them out widely. They shouldn’t. Autonomous vehicles will mark the end of the automotive era, in the words of legendary auto industry executive Bob Lutz. And life after driving will change cityscapes and everyone’s daily experiences.

Autonomous vehicles could be a boon to OPEC, or a serious problem. If falling costs for driving mean more miles logged in cars powered by internal combustion engines, then OPEC benefits regardless of the number of cars on the road. If, however, those autonomous vehicles are electric, then added miles driven leaves oil demand the same, or sends it lower.

In the meantime, the ride-hailing business is already altering the flow of city traffic, even as consumer choices force change at its leading companies. Uber hasn’t recovered its market sharein San Francisco and New York since a #deleteUber social media campaign was staged earlier this year. But in a fresh effort to play nice with cities and regulators, the company’s new chief executive says, “We do the right thing. Period.” Uber has even open-sourced its own artificial intelligence language, though there’s an element of self-interest in doing so.

Ride-hailing companies may have a bigger role to play as governments consider legalizing marijuana. British Columbia, for one, has received 136 ‘stakeholder submissions’ with concerns or suggested guidance for regulating recreational cannabis, including two – from the BC Trucking Association and the BC Automobile Association – that recommend regulations to ensure safe driving.

Finally, pedestrians in cities are looking to reclaim space from automobiles, turning loud and exhaust-filled streets into walkways and shopping arcades. London, for instance, plans to turn Oxford Street into “the world’s best outdoor shopping experience.”

OPEC doesn’t have a row in its Outlook spreadsheet that predicts when cars will drive themselves, but autonomous vehicles, along with greater use of shared ride-hailing services and expanded pedestrian spaces all help explain why there’s good reason to expect a future with fewer cars on the road.

To contact the editor responsible for this story:
Mary Duenwald at mduenwald@bloomberg.net