China’s anti-pollution drive is brightening more than its smoggy skies.

The Global X China Materials ETF has delivered a 56 percent return this year as inefficient and illegal production in the Asian nation is shut down, giving companies in the exchange-traded fund healthier profit margins and more breathing room to expand output.

That’s made Global X China Materials the third-best performing ETF linked to commodity producers this year, with a return almost quadruple the gain of the SPDR S&P 500 ETF, which tracks the record-breaking U.S. equities index, and triple the rally in MSCI World Materials Sector Index. In the year through Wednesday it was the second-best performer.

China’s anti-pollution initiatives have changed the dynamics of markets for raw materials from aluminum to cobalt to paper by forcing companies that can’t meet environmental standards to curtail production or close facilities. And the government is showing no signs of slowing the drive down.

“The country is really taking pollution seriously,” Jay Jacobs, the New York-based director of research at Global X Funds, said in a telephone interview. “This ETF is going to benefit from higher commodity prices, as well as increased output” from the producers tracked by the fund, he said. 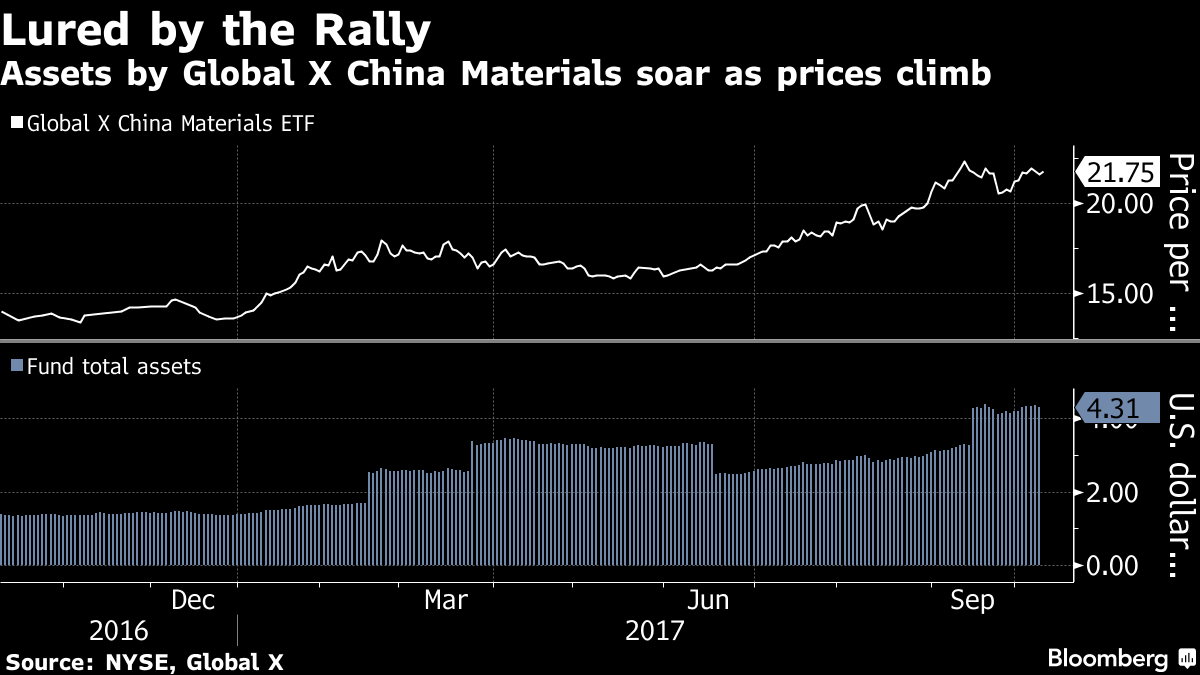 Global X China Materials, which trades under the ticker CHIM, tracks many of the nation’s biggest producers. Its third-largest holding, Aluminum Corp. of China Ltd., known as Chalco, is seen by Morgan Stanley as the key beneficiary of the government’s anti-pollution drive, which has cut capacity in the industry. Chalco’s shares have more than doubled this year in Hong Kong, the second-best performance among the 18 global base-metal producers tracked by Bloomberg Intelligence.

Aluminum has climbed 26 percent this year as China shutters plants. Capacity cuts at smelters announced so far this year have reached 4.48 million metric tons, 3.15 million tons of which have already been curtailed, according to a Macquarie Group Ltd. estimate in a note dated Tuesday. That will widen the market’s projected global deficit next year, the bank’s analysts said.

“The aluminum smelter cuts story is more fresh, dating from the first quarter, but has effectively transformed a very bearish, oversupplied commodity into one in deficit for the next 18 months at least,” Macquarie analysts including Vivienne Lloyd said in the note. “Even the most persistent naysayers have had to accept the power of the world’s largest command economy to upend the global supply-demand balance.”

The impact of China’s pollution curbs could go beyond metals. The drive may shut small mines that have incomplete government approvals and curtail the use of diesel trucks at ports, leading to more supply disruptions and rising prices, according to Morgan Stanley.

China Molybdenum Co., the ETF’s second-largest holding, is another of the New York-based bank’s preferred stocks. The second-largest cobalt producer is seen benefiting from the Asian nation’s increasing commitments to expand sales of electric cars, which are made with batteries that use the raw material.

In September Xin Guobin, China’s vice minister of industry and information technology, said the government is working with regulators on setting a deadline to end production and sales of vehicles that run on fossil fuel. The nation joined the U.K. and France in seeking a timetable for the elimination of vehicles using gasoline and diesel.

China’s plan to shift to electric cars has helped Global X Lithium & Battery Tech ETF deliver a 60 percent return this year, making it the best performer among funds linked to material producers, according to data compiled by Bloomberg. Lithium demand is surging as its use increases in batteries for electric vehicles, laptop computers and phones. The second-best performer is VanEck Vectors Rare Earth/Strategic Metals ETF, which also has China Molybdenum as one of its biggest holdings.

The stricter enforcement of environment standards may have been motivated by China’s desire to boost investor sentiment toward former state-owned enterprises that failed to impress shareholders, says Frances Hudson, a strategist at Aberdeen Standard Investments, which oversees $758 billion.

Whatever the motivations, investors should recognize that China’s focus on reducing pollution is real, she said.