China unveiled its plan for a national carbon market, creating the world’s biggest trading system for the climate-warming emissions.

The market will initially involve only the power sector, National Development and Reform Commission Vice Chairman Zhang Yong said Tuesday at a briefing in Beijing. While that’s a pullback from a previous plan to include eight industries, China’s market will still be bigger than the European Union’s system, encompassing 1,700 companies and about 3 billion metric tons of emissions. Zhang didn’t give details on when trading will start.

The world’s biggest carbon emitter wants to use a market-based system to help it cap emissions by about 2030. The nation is also making big bets on clean-energy projects to help reach its goal of deriving 20 percent of its energy from sources other than fossil fuels by that year. 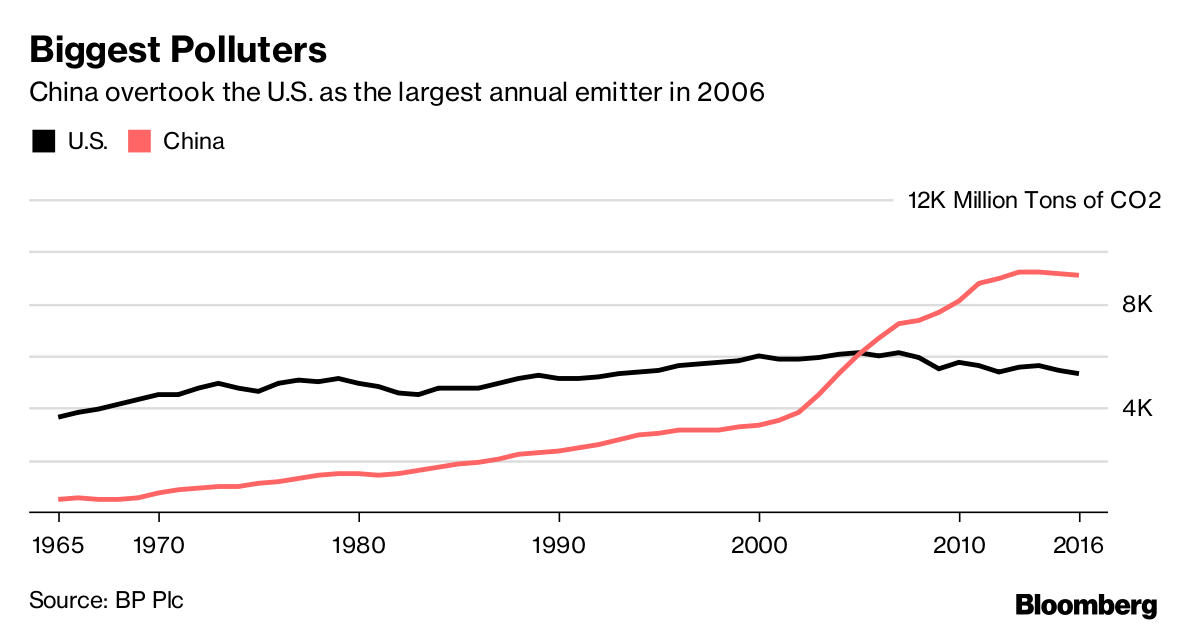 The introduction of carbon trading in China “is yet another powerful sign that a global sustainability revolution is underway,” former U.S. Vice President Al Gore, who has championed efforts to cut fossil-fuel use, said in a statement. “With the top global polluter enacting policies to support the Paris Agreement and transition to a low carbon economy, it is clear that we’re at a tipping point in the climate crisis.”

The Paris Agreement on climate change in 2015 brought together some 200 nations, including the U.S. and China, in calling for limits on fossil-fuel emissions worldwide. The goal was to help meet the UN’s target of holding global warming to “well below” 2 degrees Celsius (3.6 degrees Fahrenheit). President Donald Trump has vowed to pull the U.S. out of the accord, and is pursuing policies to encourage burning more coal.

China’s system will adopt a cap-and-trade rule in which the biggest corporate polluters purchase credits from those that don’t emit as much, and companies are encouraged to reduce their emissions so they can sell unused allocations. Companies that emit more than 26,000 tons of carbon annually will be included in the market, though that threshold might be lowered at some point, according to the NDRC.

The nation is pressing ahead with a trading plan as similar strategies in the European Union and elsewhere have struggled. The EU was the first to require carbon permits, in 2005, only to see the price plunge in part because participating nations handed out too many allowances for free.

Australia repealed its carbon tax in 2014 and scrapped plans for permit trading after the measures were blamed for destroying jobs. But carbon markets in various forms are in place in California, New Zealand and South Korea, where they’re attempting to learn from other’s mistakes.

China has been running pilot programs since 2013 in some regions, where transaction values totaled 4.5 billion yuan ($680 million) as of September, Li Gao, an official of the climate-change department at the NDRC, said at a briefing in October. The agency said Tuesday that companies that qualify for the national system will stop participating in the pilot projects.

The carbon market is expected to be fully functional by 2020, according to almost half of 260 industry participants in a survey conducted by China Carbon Forum, ICF International Inc. and SinoCarbon Innovation & Investment Co. between March and July. Forty-four percent anticipate that will happen between 2021 and 2025.