London, New York, São Paulo, November 25, 2019 – New investment in wind, solar, and other clean energy projects in developing nations dropped sharply in 2018, largely due to a slowdown in China. While the number of new clean power-generating plants completed stayed flat year-to-year, the volume of power derived from coal surged to a new high, according to Climatescope, an annual survey of 104 emerging markets conducted by research firm BloombergNEF (BNEF).

The findings suggest that developing nations are moving toward cleaner power but not nearly fast enough to limit global CO2 emissions or the consequences of climate change. The majority of new power-generating capacity added in developing nations in 2018 came from wind and solar, for instance. But the majority of power to be produced from the overall fleet of power plants added in 2018 will come from fossil sources and emit CO2. This is due to wind and solar projects generating only when natural resources are available while oil, coal, and gas plants can potentially produce around the clock.

Meanwhile, the volume of actual coal-fired power generated and consumed in developing countries jumped to 6.9 thousand terawatt-hours in 2018, up from 6.4 thousand in 2017. The approximately 500 terawatt hours in new coal consumption is roughly equivalent to all the power consumed in Texas in a normal year. Across the 104 emerging markets surveyed in Climatescope, coal accounted for 47% of all generation.

China, both the world’s largest CO2 emitter and largest market for clean energy production and consumption, played a crucial role in the story. Investment in new wind, solar, and other non-large hydro renewables projects in the country fell to $86 billion in 2018 from $122 billion in 2017. That net decline mirrored a $36 billion drop in emerging markets’ clean energy investment figures, the largest ever tracked by Climatescope.

The decline was not confined to China, however. Inflows to clean energy projects in India and Brazil slipped $2.4 billion and $2.7 billion, respectively from the year prior. Across all emerging markets surveyed, 2018 investment fell to $133 billion, lower than not just the 2017 total but the 2015 figure as well. Overall, declining costs for solar and wind played a considerable factor in the fall in absolute dollar investment in emerging economies. 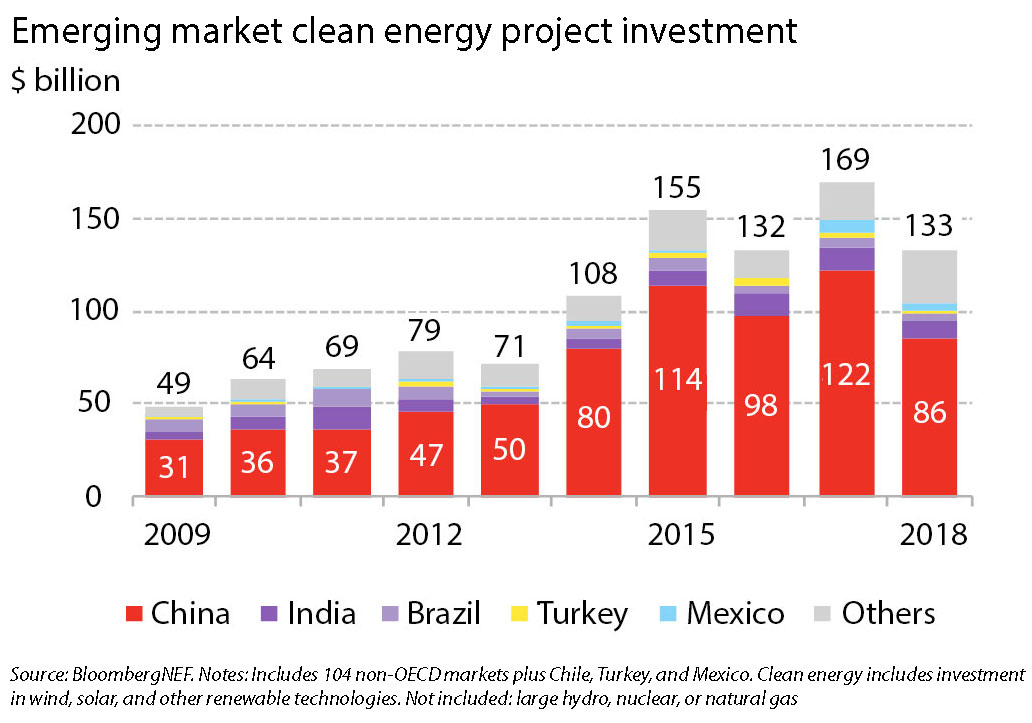 “This year’s Climatescope headline results are undeniably disappointing,” said Luiza Demôro, who manages the project for BloombergNEF. “However, apart from the very largest nations, we did see some important and positive developments, in terms of new policies, investment, and deployment.”

Despite the spike in coal-fired generation, the pace of new coal capacity added to grids in developing nations is slowing, according to Climatescope. New construction of coal-fired power plants fell to the lowest level in a decade in 2018. After peaking at 84GW of new capacity added in 2015, coal project completions plummeted to 39GW in 2018. China accounted for approximately two thirds of this decline.

“The transition from coal toward cleaner sources in developing nations is underway,” said Ethan Zindler, head of Americas at BNEF. “But like trying to turn a massive oil tanker, it takes time.”

The Climatescope results come just ahead of next month’s United Nations-supported climate negotiations in Madrid. Under the 2015 Paris Climate Agreement by the United Nations Framework Convention on Climate Change (UNFCCC), over 190 nations have agreed to substantially curb their CO2 emissions to avoid the worst effects of climate change. In addition, under the pact, wealthy nations promised to provide $100 billion in “north-south” funding to developing nations to help them grow sustainably.

This year’s Climatescope results suggest substantial additional work will be required to meet that commitment, despite some progress. Of the total $133 billion in asset finance that flowed to supporting development of new clean energy projects in the markets in developing nations, just $24.4 billion or 18% came from sources outside those countries. Of that total, the large majority came from private sources of capital, such as international project developers, commercial banks, and private equity funds. Inflows from development banks funded largely with OECD government funds did rise to a record $6.5 billion in 2018. There is little to suggest the overall goal of $100 billion per year in support for a variety of climate-related activities will be met anytime soon, however.

In addition to presenting macro trends on clean energy in developing countries, Climatescope scores and ranks individual markets on their overall potential for clean energy development. For the first time since the country was included in the survey in 2014, India was the highest-scoring nation, due to a variety of factors, including supportive policies. The rest of the top five included Chile, Brazil, China, and Kenya, in that order.

Climatescope is a public resource intended to help developers and investors screen opportunities, policy-makers understand policy frameworks around the globe, and researchers access timely, but difficult to collect, data. The complete Climatescope survey, including complete data sets for all 104 emerging markets, can be found at www.global-climatescope.org.