India is adding the least amount of coal-fired power in more than a decade as tepid demand from indebted state retailers fails to utilize the nation’s existing generation capacity.

Coal-fired capacity, which accounts for more than three quarters of the nation’s electricity, rose by 809 megawatts during the April-November period, according to Bloomberg calculations based on the latest available data from the Central Electricity Authority, the planning wing of the power ministry. That’s the slowest pace since 680 megawatts was added during the same eight-month stretch in 2006. 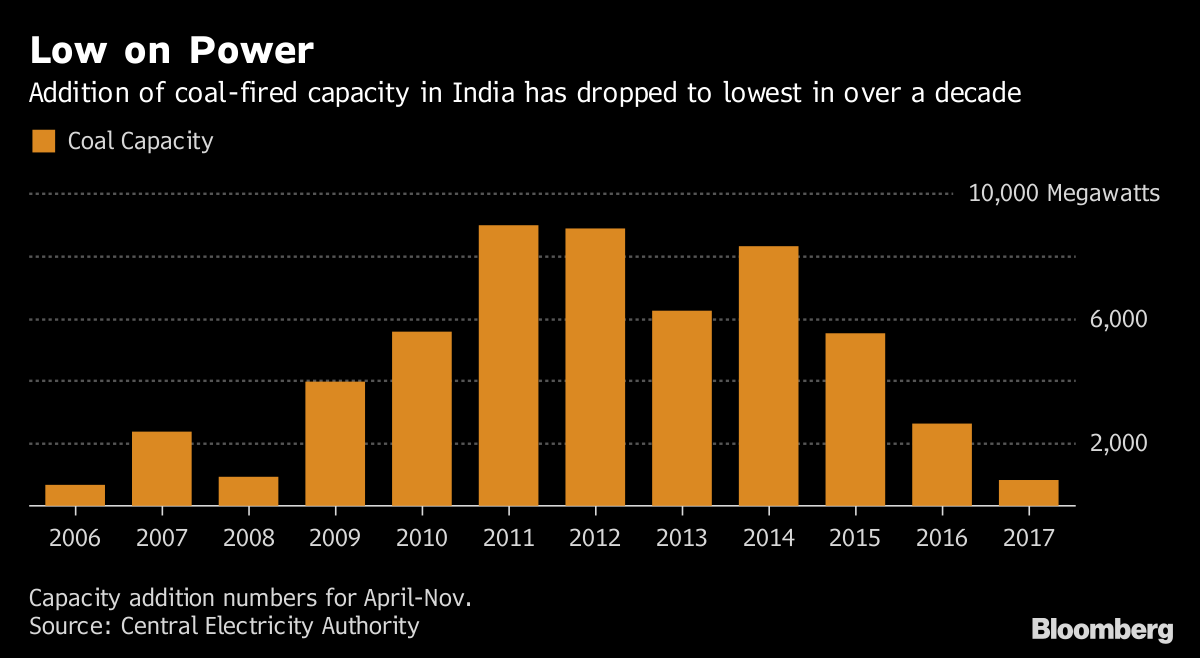 Power producers have canceled some coal-fired projects as existing plants fail to sell all the electricity they can produce. Nearly 40 percent of the country’s coal-based capacity is unused because the core customers — state-managed distribution companies — struggle to increase purchases in the face of massive debts and losses through electricity theft, insufficient metering and selling power below cost.

The inability of state distributors to utilize existing plants leaves India with a glut of capacity while still nearly 300 million Indians, mostly rural, remain without access to electricity. Prime Minister Narendra Modi’s administration, which came to power in 2014 promising electricity for all, has launched ambitious programs to bring electricity to every household by December 2018.

“Financially, the distribution companies are still not out of the woods and there isn’t enough demand to use up all the power capacity,” said Debasish Mishra, a partner at Deloitte Touche Tohmatsu LLP in Mumbai.  “Net capacity additions for coal may fall even lower in coming years as some of the older plants get phased out.”

A rapid increase in renewable power on the back of Modi’s pledge to provide clean energy is exacerbating the glut. During April-November, the country added 4.8 gigawatt of renewable capacity, according to the Ministry of New and Renewable Energy. That’s almost sixfold the additions for coal.

India won’t require any new coal-fired capacity until at least 2027 beyond the 50 gigawatts already in the works, Central Electricity Authority estimated in December 2016.

A federal government-led campaign for energy efficiency is also weighing on demand. The country’s electricity consumption peaked at 164 gigawatts during the eight months ended November, using up barely half of the installed capacity, CEA data show.