Asia’s biggest markets for liquefied natural gas, or LNG, are ready for a normal winter, Europe is not. A colder-than-normal winter could see gas prices climb higher and extend the rally in the two regions until next winter.

Europe has had less free flowing supply to replenish gas storage, and now the region is heading into winter with storage only 71% full, BloombergNEF estimates, compared to the five-year seasonal norm of 92%. One reason is that Japan and Korea have ensured their LNG inventories are in a better state entering this winter than last. The two countries stretched the limits of their long-term contract supply quantities, leading to limited spot LNG availability globally this summer.

In addition, gas demand is recovering from the lows of the pandemic year. China’s demand recovered faster than any other economy and the results of coal-to-gas switching initiatives are being felt. The country is set to overtake Japan as the top LNG importer this year – at 78.6 million metric tons versus Japan’s 73.8 million tons, BNEF projects. 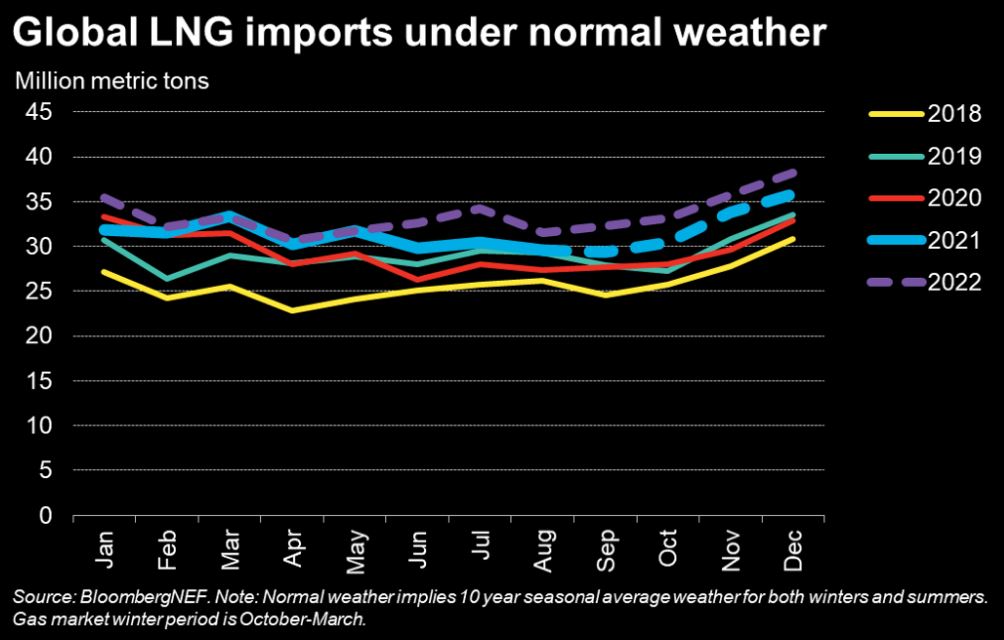 Not all supplies and demand are equally balanced. Japan and Korea will see more nuclear generation this year, reducing LNG needs. All of China’s gas supply sources – domestic production, pipeline imports and LNG – are responding to demand growth and recovery. The same can’t be said for Europe.

Europe’s supply-demand balance will remain unusually tight heading into the winter, adding further price pressure to a market already at record highs. Tightness is exacerbated by lower Russian flows this winter, the imminent phase-out of the Dutch Groningen field and lower LNG arrivals. This is a situation that booming U.S. supply can’t make up for, although a small degree of relief is possible from higher Norwegian gas flows. 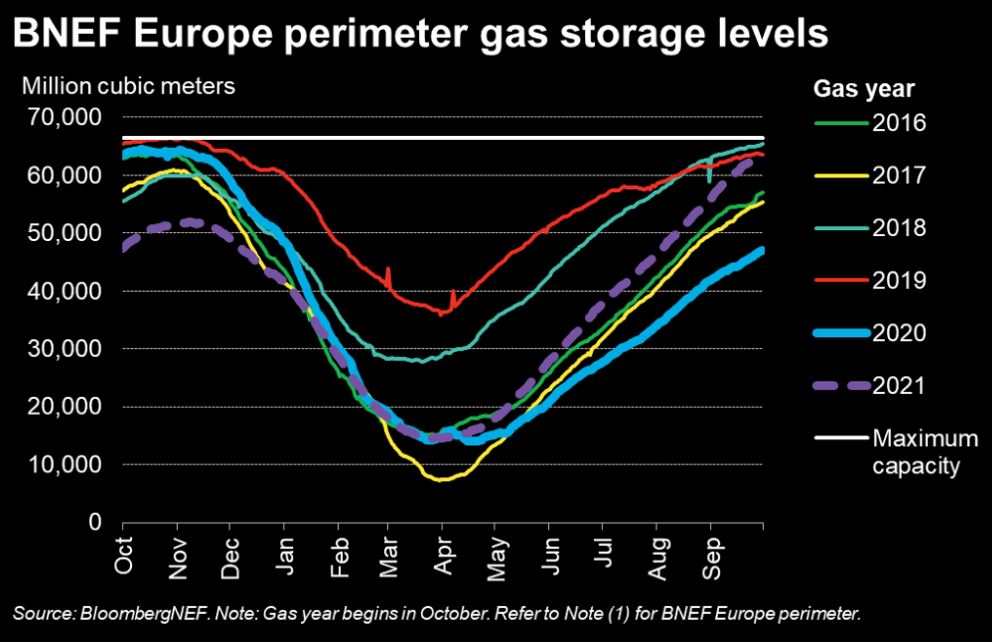 Australian LNG exports are back in full swing from production issues last winter, but U.S. supply will probably grow the most this winter. However, already high utilization rates at existing Gulf Coast liquefaction plants mean there is limited upside to how much more they can produce, no matter how wide open the arbitrage is. Early start-up of Cheniere Energy Inc.’s Sabine Pass Train 6 and Venture Global LNG Inc.’s Calcasieu Pass could provide some support, but this would be limited to a few cargoes during the winter.

U.S. LNG shippers should be less concerned about Panama Canal this season, as congestion due to Covid-19-related manning constraints should no longer be an issue. Instead, the cause for concern is rising tanker rates, despite record number LNG tankers entering the market. Gushing U.S. supply means all routes to Asia are being exhausted, tying up ships on longer journeys. Increasingly, more U.S. LNG ships are taking the extra-long route via Cape of Good Hope to North Asia. Hurricane season in the Gulf Coast is still a risk, but it is almost over. Therefore, any disruptions to Pacific Basin supply projects will be greater cause for concern, with such a tight global LNG market.

U.S. gas inventories are set to be tight over the next 12 months, as production growth is not enough to make up for increased gas exports – via LNG and pipeline. U.S. natural gas prices are trading near a decade high but producers are directing their cash toward debt reduction and increased shareholder payouts instead of growth.

Gas market at the mercy of weather 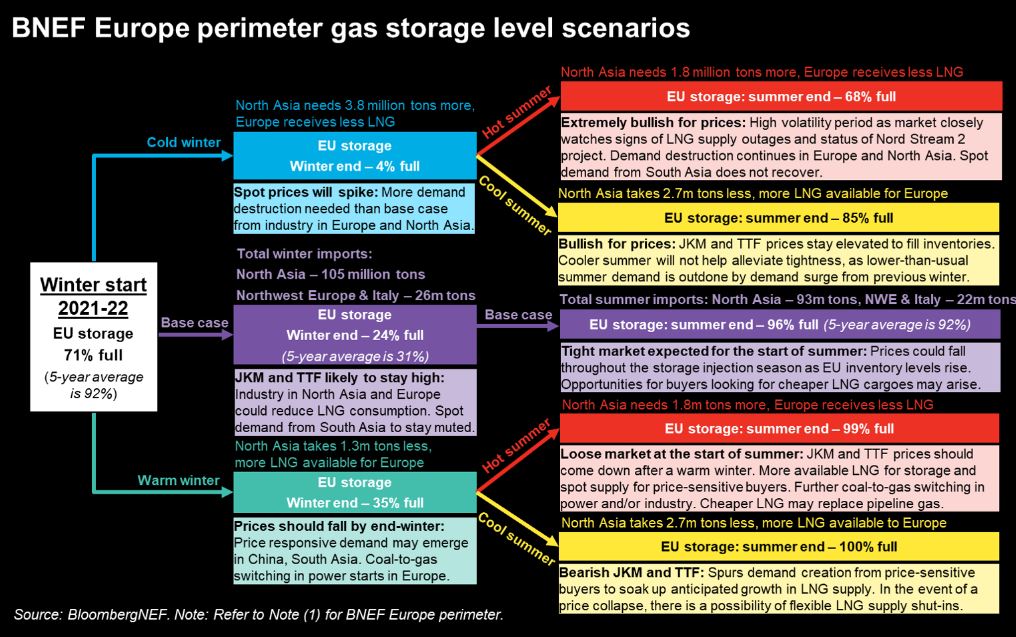 How cold or warm this winter is could shift LNG trade flows and impact regional gas price benchmarks for seasons ahead. BNEF’s analysis of 30 different weather scenarios indicates that usually deviations in winter gas demand for North Asia (Japan, South Korea, China) and Northwest Europe and Italy are comparable to each other. Power and heating demand in both rise or fall substantially in colder- or warmer-than-normal winters. The two regions have varying summer demand, so the risk of joint demand variation is worse in the case of a cold winter.

A normal 10-year average winter will result in European gas storage finishing just under the seasonal range. Gas prices would remain elevated in this scenario. By the end of a normal summer, European storage will be back to historical levels and prices would see a downward trajectory throughout the injection season. This would bring back some price-sensitive LNG buyers into the spot market.

A cold winter could turn the gas market on its head. North Asia would need 3.8 million tons more LNG, directly translating to less for Europe. China’s LNG demand would rise the most, with Northern provinces Tianjin, Hebei and Shandong importing more to meet heating demand fluctuations. Total North Asia demand upside in a cold winter is greater than the downside potential in a warm winter. 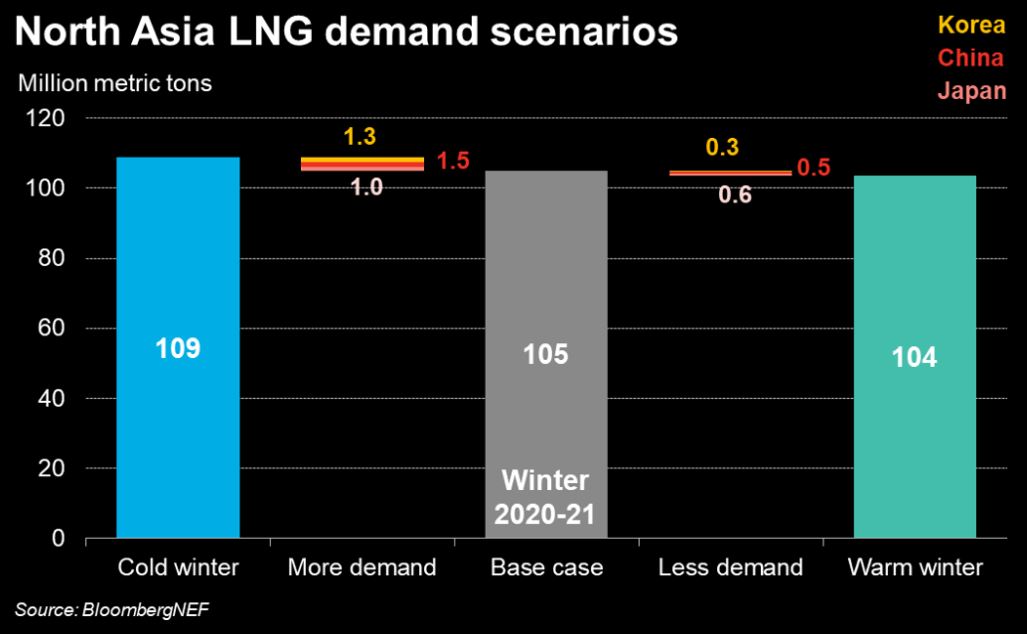 If LNG suppliers can’t meet the extra demand, there will be a dash for coal and oil. Coal capacity might already be exhausted in Japan, and even parts of Europe. Fuel oil may need to brace itself for the high gas and coal price situation bleeding into its own market. Power rationing will be a huge fear, but demand curbs will hit industry before it reaches residential and commercial buildings in most gas markets. Reports of power outages in China are more to do with a coal shortage, but for gas the risk is on heating demand for homes.

Europe could end up with almost no gas left in storage after a colder-than-normal winter, but above seasonal norms at the end of a warm one. A cold winter would deplete gas storage in both Asia and Europe to an extent that keeps the two markets in competition for LNG cargoes well into the summer (April-Sept. 2022) and perhaps into the following winter, extending the high gas price rally. Japan and Korea would need to quickly replenish stocks before peak summer demand in July-August, and again before October-November when they need to reach peak inventory levels. Asia has the upper hand over Europe though, with more contracted LNG supply they can call upon.

Summer gas demand variations are less correlated between the two regions. This is due to more widespread use of air-conditioning in Asia. A hot summer may lead North Asia to consume 1.8 million tons more LNG. In the worst-case combination scenario – cold winter and hot summer – Europe could end its summer with gas storage just 68% full, when they want to be at least 90% full. This creates an extremely bullish scenario for prices. If the weather completely turns the other way – warm winter and cool summer, Europe becomes an LNG sink and storage levels reach tank top – 100% full.

How the winter plays out could influence the role of Europe in the LNG market. It can either become a sink or pull market from next year onward. In the cold winter-hot summer scenario, Europe will need to endure high prices to pull LNG for the foreseeable future until the next big wave of LNG supply projects are commissioned. Some new capacity will be online next year, but the big additions won’t be until late-2023 at best. Just as easily though, a warm winter scenario leads to Europe being a sink market.

Commodity markets have seen price shocks before and ‘the cure for high prices is high prices’ is a well known adage. Usually such price shocks are negated in the short-term by demand elasticity or destruction, and in the case of gas by mild weather.

In the long-term, major gas and LNG suppliers will see this as a tailwind to support signing long-term gas supply investments and contracts, especially new Qatari and U.S. LNG supply looking for customers. On the other side of the energy transition debate, others will argue this price volatility in the gas market is just another reason to expedite a shift away from fossil fuel imports. This can expedite investment in other localized sources of energy, especially renewables and advancements in competing energy storage technologies or molecules.