New York, January 28, 2020 – Corporations bought a record amount of clean energy through power purchase agreements, or PPAs, in 2019, up more than 40% from the previous year’s record. The majority of this purchasing occurred in the United States, but also underpinning the strong uptrend is a surge in corporate sustainability commitments around the world.

BloombergNEF (BNEF) finds in its 1H 2020 Corporate Energy Market Outlook, published today, that some 19.5GW of clean energy contracts were signed by more than 100 corporations in 23 different countries in 2019. This was up from 13.6GW in 2018, and more than triple the activity seen in 2017.

Put in context, the 2019 total was equivalent to more than 10% of all the renewable energy capacity added globally last year – and the projects involved are likely to cost between $20 billion and $30 billion to develop and build.

Jonas Rooze, lead sustainability analyst at BNEF, said: “Corporations have purchased over 50GW of clean energy since 2008. That is bigger than the power generation fleets of markets like Vietnam and Poland. These buyers are reshaping power markets and the business models of energy companies around the world.” 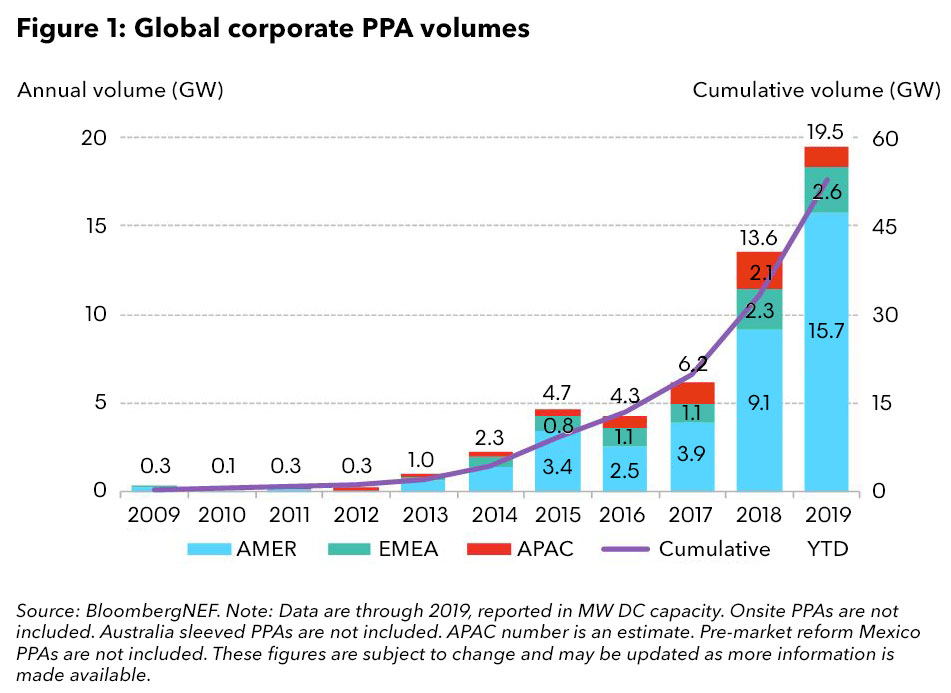 Technology companies once again dominated clean energy procurement. Google signed contracts to purchase over 2.7GW of clean energy globally in 2019, more than any other corporation. In September 2019, the tech giant announced contracts to purchase 1.9GW of clean energy in six countries – the largest single announcement ever by a corporation. The company used a unique reverse auction process to sign these contracts, with developers taking part in a live, public bidding process. Facebook (1.1GW), Amazon (0.9GW) and Microsoft (0.8GW) were the next largest buyers globally in 2019.

Though not as active as the technology sector, a growing number of oil and gas companies are signing clean energy deals. Occidental Petroleum, Chevron and Energy Transfer Partners all signed solar contracts in 2019, following in the steps of ExxonMobil, who kicked off the trend by signing two PPAs totalling 575MW at the end of 2018.

Kyle Harrison, a sustainability analyst at BNEF and the lead author of the report, commented: “The clean energy portfolios of some of the largest corporate buyers rival those of the world’s biggest utilities. These companies are facing mounting pressure from investors to decarbonize – clean energy contracts serve as a way to diversify energy spend and reduce susceptibility to the tangible risks associated with climate change.”

Figure 1 (above) shows that PPAs in the Americas region totalled an unprecedented 15.7GW last year. The U.S. made up the bulk of this, at 13.6GW – more than all of global activity in 2018. More than 80% of these contracts signed in the U.S. in 2019, or 11.2GW, were under the virtual PPA model – synthetic contracts that can only be signed in deregulated markets. The remaining 2.4GW of clean energy purchased by corporations in the U.S. in 2019 was transacted under green tariffs, which are offered by utilities in regulated markets.

It was also a record year for corporate PPAs in the Europe, Middle East and Africa (EMEA) and Latin America, where companies purchased 2.6GW and 2GW of clean energy, respectively. Notable in EMEA was the pivot to new European markets outside of the Nordics. Though nearly half of the activity still came from Sweden, Norway, Finland and Denmark, companies are now beginning also to sign long-term clean energy contracts in markets like Spain, Poland, France and Italy for the first time. Corporations signed two offshore wind contracts in Germany, indicative of future trends from buyers in the region. Those who cannot sign PPAs can turn to the region’s extensive certificates market.

In Latin America, which saw threefold growth in its corporate PPA market, Brazil and Chile have emerged as top markets. Brazilian customers with annual demand over 3MW, known as wholesale consumers, have negotiated contracts directly with clean energy developers. In Chile, large mining companies like BHP Group and Antofagasta, facing similar investor pressure to oil and gas companies, are negotiating special clean energy supply agreements with retailers. Colombia is the next Latin American market to watch, following the successful roll-out of its first clean energy auctions.

While 2019 was a down year for corporate PPA activity in Asia Pacific (APAC), there is still plenty of buzz in the region. In Australia, onsite solar projects delivering power to corporations nearly doubled to 1GW, and a growing number of retailers offer sleeved programs to deliver clean energy reliably to corporate buyers, similar to green tariffs in the U.S. China’s renewable portfolio standards (RPS) are officially in force, mandating that large power consumers meet a certain amount of their demand with clean energy. Japan’s non-fossil certificate auctions grew 11-fold, boosted by the country’s high level of participation in sustainability initiatives – unrivalled among Asian markets.

Corporate sustainability commitments also skyrocketed in 2019, and were a driving force behind the record-breaking year for PPAs in 2019. Nearly 400 companies around the world committed to setting a science-based target in 2019, more than doubling the total number of firms with these goals. These firms have pledged to reduce their emissions in line with the Paris Agreement, and clean energy will be an essential part of this strategy. Additionally, 63 companies set an ‘RE100’ target, pledging to offset 100% of their electricity demand with clean energy. The RE100 totalled 221 members through 2019, collectively consuming 233TWh of electricity in 2018, based on their latest filings – slightly less than South Africa’s entire power generation fleet.

BNEF estimates these 221 RE100 companies will need to purchase an additional 210TWh of clean electricity in 2030 to meet their targets. Should this shortfall be met with offsite PPAs, it would catalyze an estimated 105GW of new solar and wind build globally. Funding these new additions would be expected to require an additional $98 billion of investment (including allowance for capital cost reductions during the 2020s).

Harrison said: ”Sustainability commitments will ensure that clean energy procurement from corporations continues to thrive. The ball is in the court of utilities, policymakers and investors. They will need to meet these buyers in the middle, especially in nascent markets for corporate procurement.” 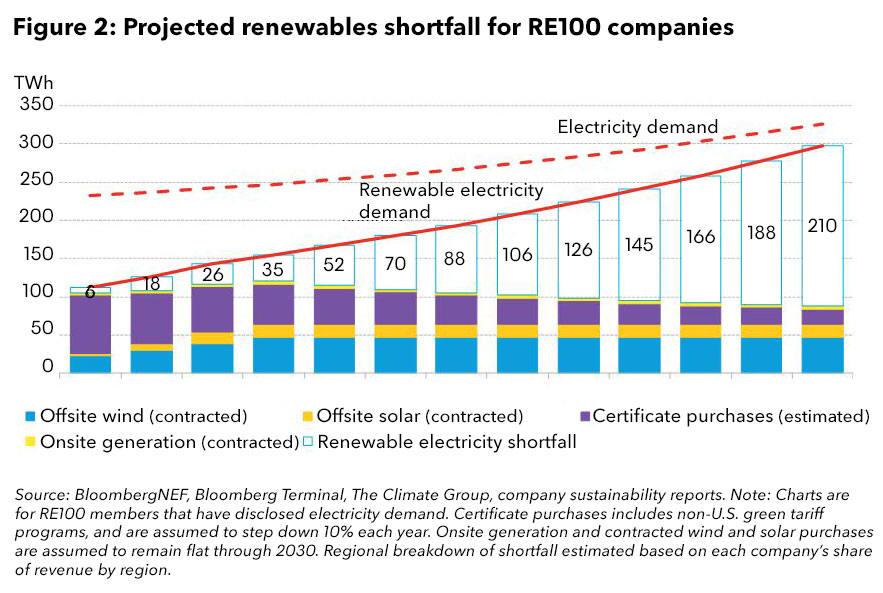