BloombergNEF (BNEF) finds in its 1H 2019 Corporate Energy Market Outlook, published today, that some 13.4GW of clean energy contracts were signed by 121 corporations in 21 different countries in 2018. This was up from 6.1GW in 2017, and positions companies alongside utilities as the biggest buyers of clean energy globally.

Jonas Rooze, head of corporate sustainability for BNEF, said: “Corporations have signed contracts to purchase over 32GW of clean power since 2008, an amount comparable to the generation capacity of the Netherlands, with 86% of this activity coming since 2015 and more than 40% in 2018 alone.”

More than 60% of the global activity in 2018 occurred in the U.S., where companies signed PPAs to purchase 8.5GW of clean energy, nearly triple the amount signed in 2017. Facebook spearheaded a contingent of experienced U.S. corporate energy buyers, purchasing over 2.6GW of renewables globally in 2018, primarily with utilities in regulated U.S. markets through programs known as green tariffs. This was three times that of the next biggest corporate energy buyer, AT&T. 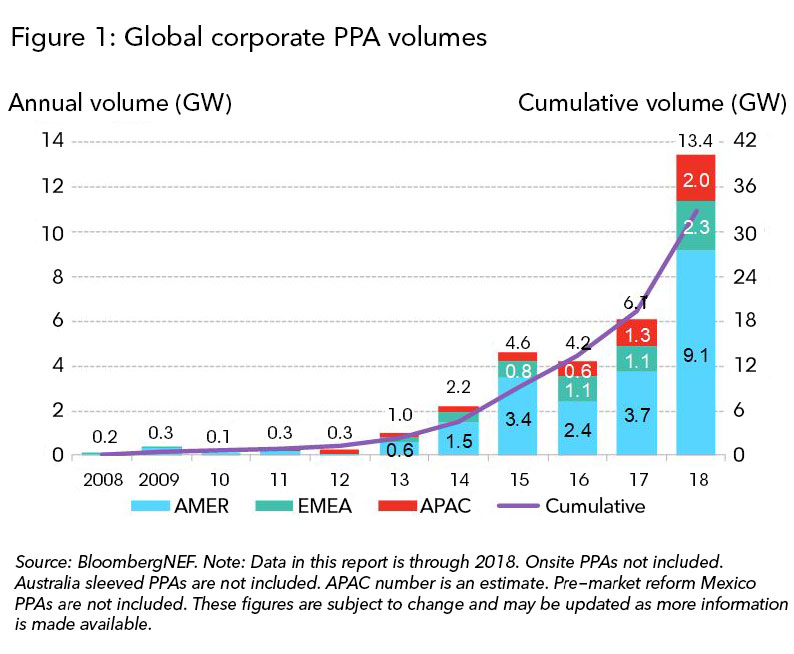 ExxonMobil became the first oil major to sign a clean energy PPA for its own operations, purchasing 575MW of solar and wind in Texas. Mexico and Brazil also saw growth in corporate procurement, rounding out the 9.1GW of clean energy purchased by companies in the Americas region in 2018.

In the U.S. a major feature was the emergence of smaller, first-time corporate clean energy buyers. In 2018, some 34 new companies signed their first clean energy PPAs, making up 31% of total activity in the U.S. These firms are aggregating their electricity demand to reap the economies of scale from larger solar and wind projects. In many cases, they benefit from partnering with a bigger, more experienced buyer – known as an anchor tenant – who can offer a stronger balance sheet and expertise on accounting and legal nuances when signing a PPA.

Kyle Harrison, a corporate sustainability analyst for BNEF and lead author of the report, said: “The aggregation model has heralded in a new generation of corporate clean energy buyers. These companies no longer need to tackle the complexities of clean energy procurement alone. They can share risks associated with credit and energy market volatility with their peers.”

In the Europe, Middle East and Africa (EMEA) region, corporations also purchased record volumes of clean energy, inking deals for 2.3GW and doubling the 1.1GW signed in 2017. The Nordics were once again the hot spot for activity, with companies attracted to strong wind resources and credit support from government bodies. Aluminium producers Norsk Hydro and Alcoa Corp purchased the most clean energy in Europe in 2018, but the region also saw activity from multinational technology companies such as Facebook, Amazon and Alphabet subsidiary Google.

Several European countries that saw little or no corporate procurement activity in 2017 enjoyed a rise in interest in 2018. Companies signed PPAs for the first time in Poland, and just the second time in Denmark and Finland. There were also new deals signed in the U.K., following a lull after the expiration of a national subsidy program. Several requests for proposals and changes in policy suggest burgeoning new markets in Germany and France as well.

In the Asia-Pacific (APAC) region, still a nascent market for corporate procurement, companies signed a record 2GW of clean energy PPAs, more than the previous two years combined. Nearly all of this activity occurred in India and Australia, with roughly 1.3GW and 0.7GW of clean energy purchased, respectively. Both markets allow companies to buy clean energy at a large scale through offsite PPAs, making them rarities for the region.

Demand still far outstrips supply in the rest of APAC, although recent changes in several markets suggests a major spike in activity is on the horizon. Offsite corporate PPA mechanisms are now available in nine provinces in China, and the imminent passing of a renewable portfolio standard will give over 30,000 large commercial and industrial companies renewable electricity targets. In Japan, the country’s third non-fossil certificate auction saw corporations purchase 21TWh, tripling the combined activity in the first two auctions. Thirteen companies in Japan have also established 100 renewable electricity targets, more than the rest of APAC combined.

The healthiest signal of continued growth in the global corporate procurement space is the growing alliance of companies establishing clean energy and sustainability commitments. One such campaign, known as the RE100 – consisting of nearly 160 signatories at the end of 2018 that have established 100% renewable electricity targets – has companies domiciled in 23 different markets. Cumulatively, these companies consumed an estimated 189TWh of electricity in 2017, equivalent to Egypt’s electricity consumption.

BNEF estimates these companies will need to purchase an additional 190TWh of clean electricity in 2030 to meet their RE100 targets. Should this shortfall be met with offsite solar and wind PPAs, it would catalyse an estimated 102GW of new solar and wind build globally, greater than the size of the U.K.’s power generation fleet in 2017 (see Figure 2 below).

Rooze said: “For companies that think seriously about sustainable growth, establishing clean energy and decarbonization targets lines up naturally with overall corporate strategies. At the same time, these initiatives have created an entire new universe of opportunity for utilities, clean energy developers and investors.” 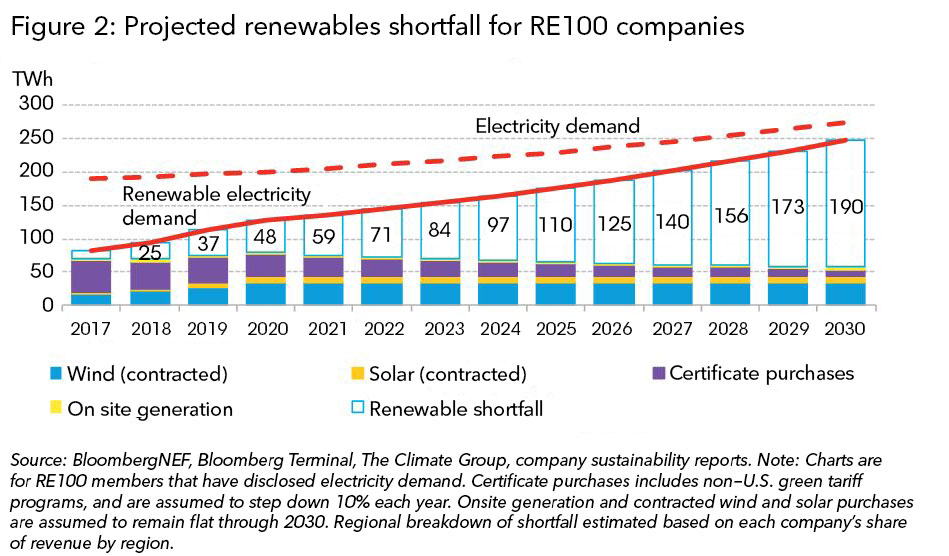