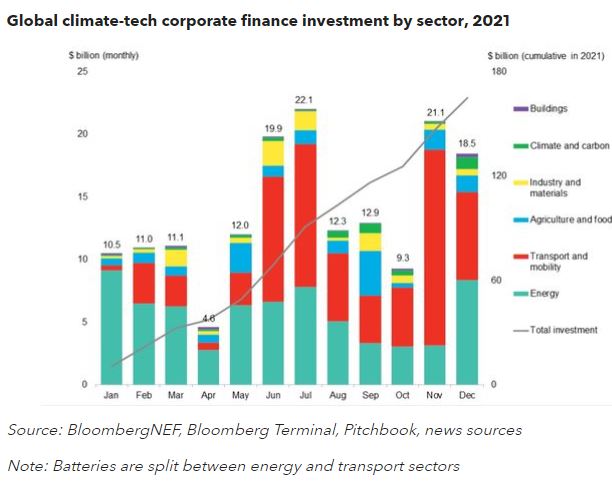 Climate-tech companies raised $165 billion across public and private markets in 2021. The energy and transport sectors attracted the most capital, at $68.5 billion and $67.3 billion, respectively.

Popular technologies for investment were wind, solar, hydrogen and fuel cells, batteries and electric vehicles — all of which need capital to scale. The largest deal was the $12 billion initial public offering (IPO) of electric truck company Rivian, backed by investors including Amazon and Ford.

While the industry, materials and buildings sectors raised lower totals, reflecting slower progress on decarbonization, new funding sources, such as materials-specific VC funds, may spur more investment in these areas in 2022.

For more detail on these findings, an abridged version of the 2022 Energy Transition Investment Trends Report can be downloaded from this page. BNEF subscribers can find the full report on the client website and on the Bloomberg Terminal.