Corporations Already Purchased Record Clean Energy Volumes in 2018, and It’s Not an Anomaly

A new report from Bloomberg NEF shows that corporations have already purchased 7.2GW of clean energy globally in 2018 through July, shattering the previous record of 5.4GW for the whole of 2017. Companies have now signed long-term contracts to purchase solar and wind in 28 markets, and the number of industries involved in clean energy purchasing continues to grow. 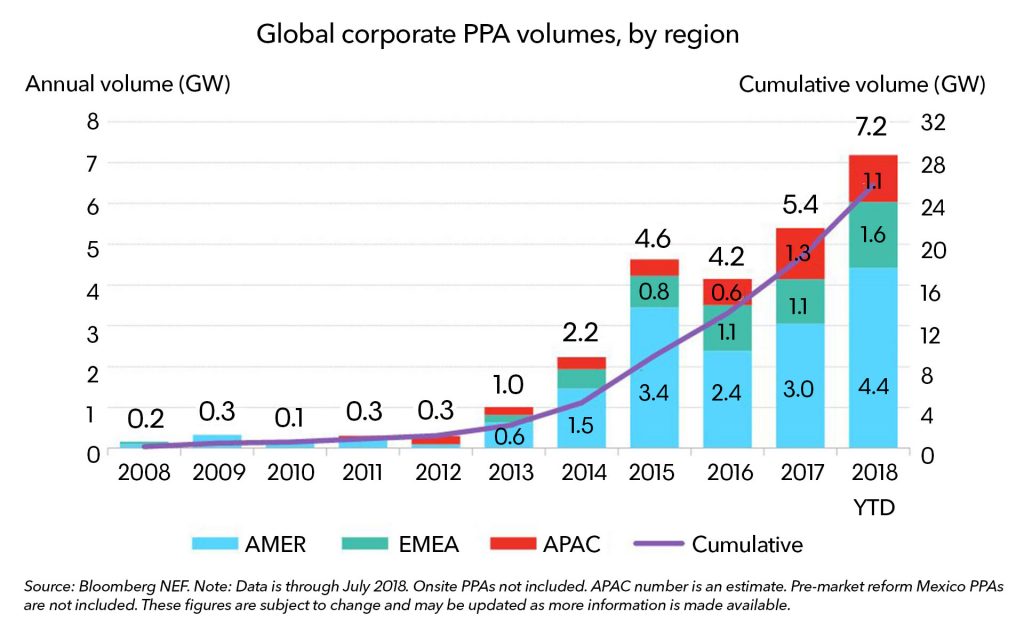 Many corporate sustainability plans promote actions that reduce or offset emissions internally and that incentivize the construction of new clean energy projects ­– two complementary goals realized through corporate power purchase agreements (PPA). But activity would not approach current levels if there were no opportunity for long-term savings. PV module costs are down 84% globally since 2010, while wind turbine costs are down 32% over the same period, Bloomberg NEF found in its recently published New Energy Outlook. Taken together with efficiency improvements that have boosted running hours at renewable plants, these cost declines have made renewables cost-competitive with wholesale power prices and more traditional sources of electricity. As a result, we’re seeing corporations locking into fixed, long-term clean energy contracts, hedging against volatile prices in the wholesale market. This is known as the virtual PPA model, and remains the most common corporate procurement mechanism.

Where is the growth happening?

The United States and Nordics have made up just under 80% of corporate procurement activity in 2018. In the U.S., companies have grown more comfortable with the virtual PPA model, serving as the offtaker on several projects, but smaller companies are also increasingly pooling their electricity demand together to access the economies of scale achieved through larger solar and wind projects, known as aggregation. In the Nordics – a market with a prevalence of corporations with high electricity demand and sustainability objectives – companies are attracted to strong wind resources and the Nordpool power market, which allows for electricity to be bought, delivered and sold between Sweden and Norway. Australia and Mexico remain two nascent markets where activity is beginning to pick up, due to expensive wholesale power prices and strong renewable resources.

Technology companies are the biggest buyers of clean energy, purchasing 1.8GW so far in 2018. Facebook has been the biggest corporate buyer this year, working with regulated utilities in the U.S. and signing a wind PPA in Norway to bring its total clean energy purchases to 1.1GW in 2018. Materials companies trail close behind, with 1.4GW purchased in 2018. This activity comes largely off the back of aluminum manufacturers Norsk Hydro and Alcoa in the Nordics, who are using low-carbon credentials to sell aluminum at a premium in some markets. 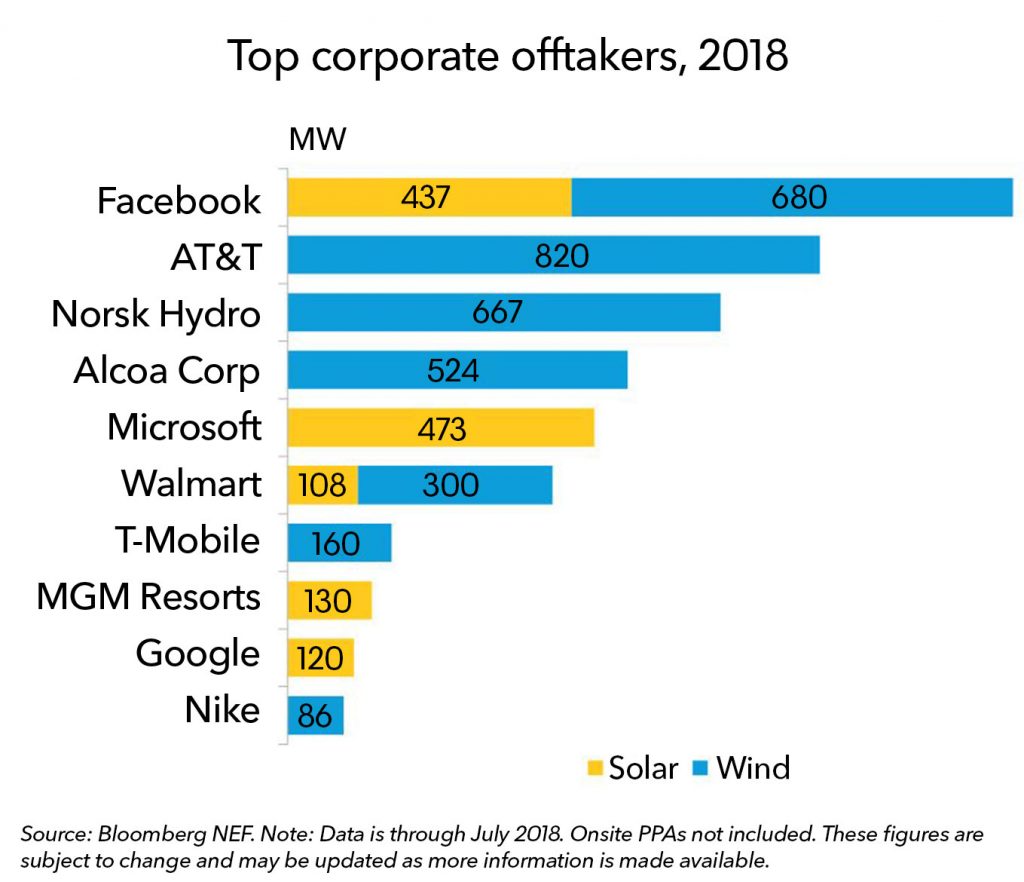 AT&T has spearheaded a recent push from telecom companies to buy clean energy. The company has purchased 820MW of wind generating capacity in 2018 – its first renewables purchases ever. T-Mobile also announced its second clean energy PPA in 2018 and a commitment to go 100% renewable.

What can we expect moving forward?

Bloomberg NEF forecasts that the current 140 signatories of the RE100 (a pledge to offset 100% of electricity demand with renewables) will need to purchase an additional 197TWh of clean energy in 2030 to reach their targets. Were this shortfall to be met with long-term contracts for new solar and wind projects, it would lead to an additional 100GW of build – for context, this is slightly larger than California’s entire electricity grid today.

Meanwhile, the number of companies signed up to the RE100 continues to grow. As more multi-nationals establish renewables targets, we expect corporations to have an increasing impact on power market design around the world, opening up new avenues for companies to purchase clean energy.

BNEF clients can see the full report “2H 2018 Corporate Energy Market Outlook” on the Terminal or on web.