Denmark Is Killing Tesla (and Other Electric Cars)

The electric car has dropped out of favor in the country that pioneered renewable energy.

Sales in Denmark of Electrically Chargeable Vehicles (ECV), which include plug-in hybrids, plunged 60.5 percent in the first quarter of the year, compared with the first three months of 2016, according to latest data from the European Automobile Manufacturers Association (ACEA). That contrasts with an increase of nearly 80 percent in neighboring Sweden and an average rise of 30 percent in the European Union. 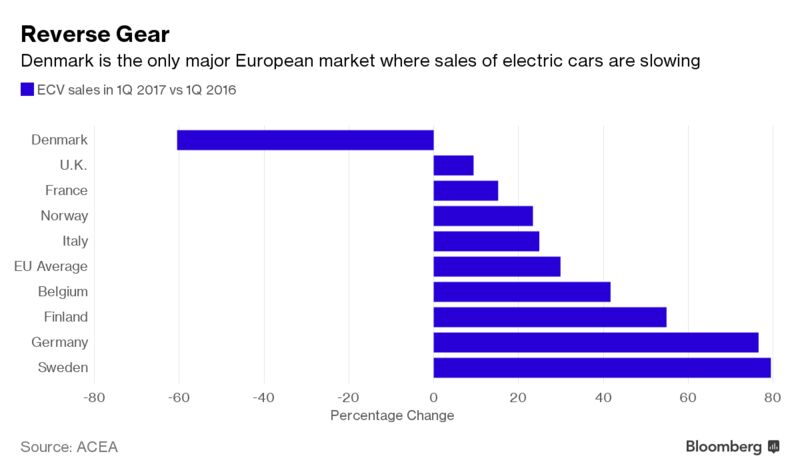 The figures suggest clean-energy vehicles still aren’t attractive enough to compete without some form of subsidy.

Denmark, a global leader in wind power whose own attempt at an electric car in the early 1980s famously flopped, used to be enthralled with them. It’s bicycle-loving people bought 5,298 of them in 2015, more than double the amount sold that year in Italy, which has a population more than 10 times the size of Denmark’s.

However, it turns out that those phenomenal sales figures had as much to do with convenience as with environmental concerns: electric car dealers were for a long time spared the jaw-dropping import tax of 180 percent that Denmark applies on vehicles fueled by a traditional combustion engine.

In the fall of 2015, the Liberal-led government of Prime Minister Lars Lokke Rasmussen announced the progressive phasing out of tax breaks on electric cars, citing budget constraints and the desire to level the playing field.

Tesla, whose sales were skyrocketing at the time, lobbied against the move, with Chief Executive Officer Elon Musk warning during a visit to Copenhagen that sales would be hit. 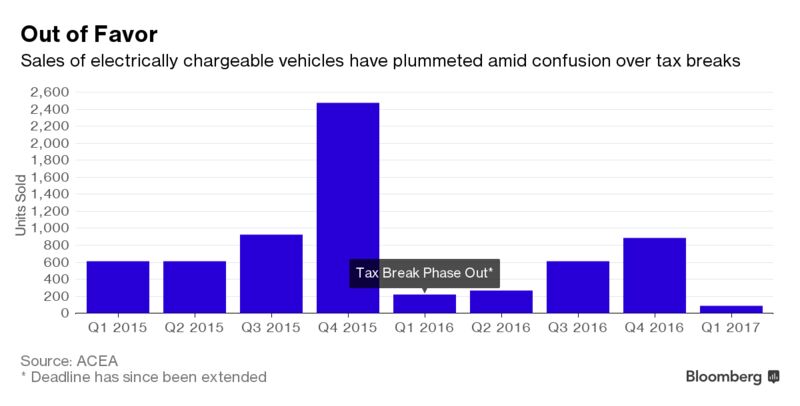 According to the government’s original plans, tax breaks were to have been phased out from 2016 to 2020, when they would be treated in the same way as fossil fuel-powered cars.

But on April 18, having taken note of the drop in sales, the government decided to change the rules.

“It’s no secret electrical vehicle sales have been below what we expected a year and a half ago,” Tax Minister Karsten Lauritzen said in a statement. “The agreed phase-in has turned out to be hard and that likely halted sales.”

While sales of low or zero emission cars continue to boom in neighboring Sweden thanks to a wide range of subsidies, including a five-year tax break and a 40,000 kronor ($4,600) purchase premium, the Danish government’s U-turn has caused confusion, prompting many potential customers to either postpone or desist from their purchases.

Flader said electric car dealers have rolled back their sales drive as a result.

The electric car industry “doesn’t want to invest in a market that may not be there next year. They’d rather invest where conditions are better and predictable long-term,”  Flader said.

One of the hardest hit is Tesla, the global poster child of electric cars, whose Model S once dominated the Danish market. 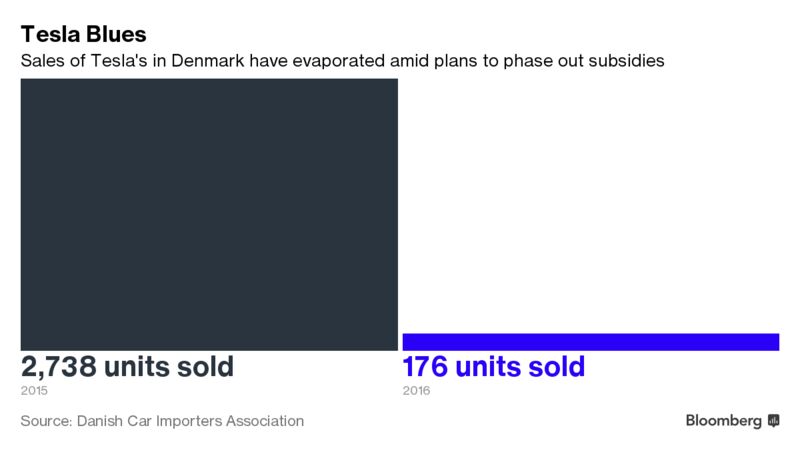 Flader, however, anticipates a rebound in sales as soon as dealerships are allowed to advertise tax-free prices again.