Between them, emerging market nations surveyed by BNEF’s annual Climatescope project accounted for the majorities of new clean energy capacity added and new funds deployed, globally in 2017. These countries are also playing the leading role in driving down clean energy costs, so that energy access can be expanded without boosting CO2 emissions.

In 2017, developing nations added 114GW of zero-carbon generating capacity of all types[1], with 94GW of wind and solar generating capacity alone – both all-time records. Concurrently, they brought on line the least new coal-fired power generating capacity since at least 2006. New coal build in 2017 fell 38% year-on-year to 48GW. That represents half of what was added in 2015 when the market peaked at 97GW of coal commissioned.

“It’s been quite a turnaround. Just a few years ago, some argued that less developed nations could not, or even should not, expand power generation with zero-carbon sources because these were too expensive,” said Dario Traum, BNEF senior associate and Climatescope project manager. “Today, these countries are leading the charge when it comes to deployment, investment, policy innovation and cost reductions.” 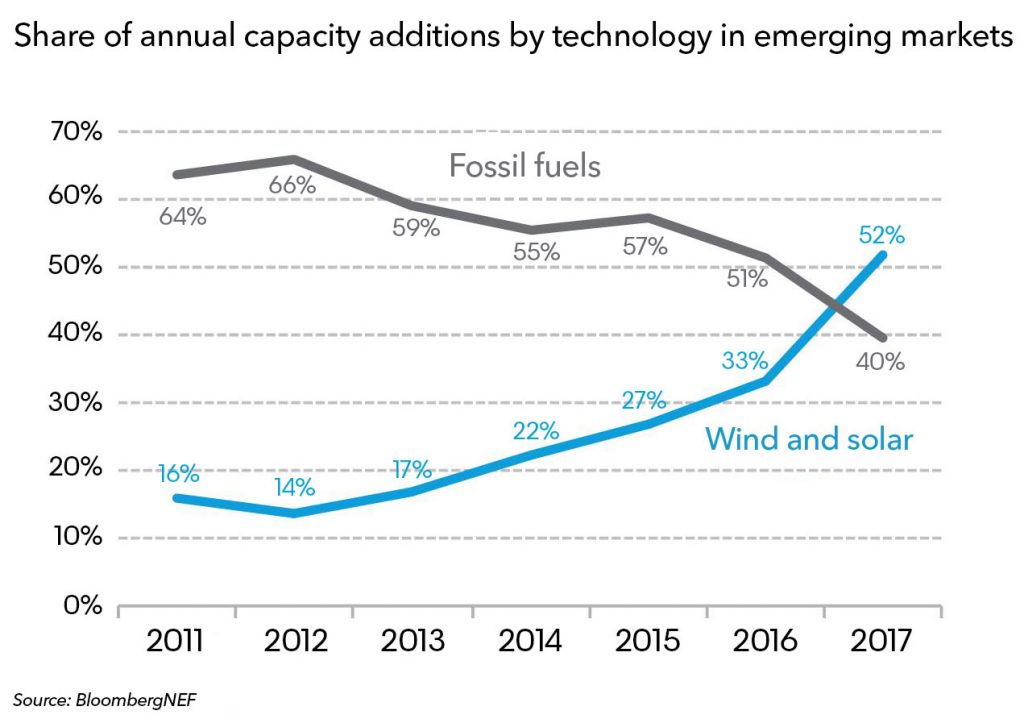 This shift is being driven by the rapidly improving economics of clean energy technologies, most notably wind and solar. Thanks to exceptional natural resources in many developing countries and dramatically lower equipment costs, new renewables projects now regularly outcompete new fossil plants on price – without the benefit of subsidies. This has been most apparent in the more-than-28GW contracted through tenders in emerging markets in 2017, involving promises from developers to deliver wind for as low as $17.7/MWh and solar for as little as $18.9/MWh.

Climatescope also revealed that clean energy dollars are flowing to more nations than ever. As of year-end 2017, some 54 developing countries had recorded investment in at least one utility-scale wind farm and 76 countries had received financing for solar projects of 1.5MW or larger. That’s up from 20 and 3, respectively, a decade ago.

Development banks, export credit agencies, and other traditional backers of projects in emerging markets continue to play an important role in the clean energy build-out. But private players, most notably international utility companies, are now among the top investors as well.

Climatescope 2018 represents the collective effort of 42 BloombergNEF analysts visiting 54 countries to collect data and conduct interviews. As in years past, the study was underwritten by the U.K. Department for International Development. For 2018, the project was expanded to survey 100 nations classified by the Organisation for Economic Co-operation and Development (OECD) as less developed, plus Chile, Mexico, and Turkey, which represent important clean energy markets. As a result of this expansion, Climatescope now offers a comprehensive snapshot of virtually all developing nations.

Climatescope includes a unique scoring system for measuring how conducive nations are to clean power investment and deployment. Each year, the survey ranks nations on this basis.

In the current survey, Chile was the top scorer. The Andean nation fared well on all three main topic areas Climatescope surveyed, due to strong government policies, a demonstrated track record of clean energy investment, and a commitment to de-carbonization despite grid constraints. India, Jordan, Brazil and Rwanda ranked 2nd through 5th, respectively. China, which received the highest score in the survey last year, finished 7th.

The Climatescope methodology was revamped for 2018 to reflect current market realities, which have shifted dramatically since BNEF first launched the project in 2012 with support from the Inter-American Development Bank Group’s Multilateral Investment Fund. The current methodology recognizes that clean energy has achieved such scale that certain countries are now established manufacturing hubs while others are best positioned to benefit as importers of low-cost goods. To reflect that, in a change from prior years, countries in the survey did not receive higher scores for hosting manufacturing chains.

This is consistent with Climatescope’s mission to highlight the conditions present in countries conducive to add clean energy generating capacity in the short run. This adjustment to the methodology resulted in some of the world’s largest nations receiving somewhat lower scores than they might have had the previous methodology, including China.

Despite successes achieved by clean energy to date in developing countries, Climatescope included sobering findings about the scale of the challenge ahead. While new coal-fired capacity additions fell to their lowest level in over a decade in 2017, actual generation from coal-fired plants rose 4% year-on-year to 6.4TWh. And despite ample evidence that new-build renewables can underprice new-build coal-fired plants, 193GW of coal are currently under construction in developing nations today according to Coalswarm data. Some 86% of this capacity is due on line in China, India, Indonesia and South Africa.

In the context of keeping global CO2 emissions in check, the longer-term challenge for clean power is not just to beat out new coal-fired power plants for new-build opportunities. Rather, it is to displace existing coal-fired plants, many of which have just recently come on line.

China and India get approximately two thirds and three quarters of their current power from coal, respectively. Combined, these two countries added 432GW of coal capacity in just the 2010-2017 period (by comparison, the U.S. has a total of 260GW of coal on line today). Faced with significant pressure to expand energy access (India) and keep power affordably priced (China), policy-makers will be reluctant to de-commission these new plants. No less than 81% of all emerging market coal-fired capacity is located in these two nations alone.

Climatescope is a public resource intended to help developers and investors screen opportunities, policy-makers understand policy frameworks around the globe, and researchers access timely, but difficult to collect, data. The complete Climatescope survey, including complete data sets for all 103 emerging markets, can be found at www.global-climatescope.org.

[1] Including nuclear, large hydro and other renewables, as well as wind and solar