As prices for crude oil drop below $30 a barrel, every oil company is trying to reduce operating and labor costs. In fact, the oil sector has done well over the past years in doing just that. One of the many reasons why the price of oil has generally fallen over the past decade is that many firms have worked out how to find, extract and refine oil more efficiently. Part of that is certainly the discovery of large U.S. unconventional oil reserves, but that has been paired with technology advances leading to U.S. producers creating faster drilling techniques, automation technologies and their adoption of cloud computing and advanced analytics. Shale oil companies such as Pioneer Resources and EOG proudly talk about their data science teams and their big data platforms as being a significant help in keeping them cost-competitive.

Investing in digitalization as a cash-flow benefit

Recently, larger oil firms such as BP, Shell, Equinor, and Total have stated their aims to invest significantly in becoming ‘digital’ companies. Shell estimates that using AI-centered digital software for its upstream and oil production business will drive $1-2 billion in revenue, while BP expects ‘billions of dollars’ of benefit from digitalization. More specifically, Equinor forecasts a $3 billion improvement in free cash flow due to digitalization in 2020-25, while Repsol estimates a $1.7-2.2 billion cash flow bump from digitalization by 2022 (over half coming from their exploration and production). Both companies have announced they are well on their way to meeting these targets.

For oil companies, digitalization refers to the collection and analysis of data, whether it is streaming from pumps on oil rigs, or from compressors in refineries, or from headsets on field workers. The aggregation of large data sets enables statistical analysis and the use of artificial intelligence or machine learning. With these tools, an oil company can predict when a part may fail, monitor and control oil field machinery remotely, and optimize energy use. Overall, digitalization should reduce the costs of labor, energy, machine maintenance and back-office operations, while increasing the amount of oil a company can produce annually.

However, these gains require investment in sensors, cloud computing, advanced analytics tools, data science teams, and a general corporate restructuring. Equinor invested $200 million in its digital strategy from 2017 to 2020, including $11 million on a software academy to train employees. Repsol spends $100 million a year on digitalization. And many oil majors plan to spend hundreds of millions each on cloud computing, mostly with Microsoft Azure.

While current oil prices do not encourage exploration for new oil, nor drilling new wells, the world still needs oil, and producing from existing wells as cheaply as possible is a priority. Oil producers can use real-time monitoring of machinery to improve uptime, analytics to respond to changing field conditions, software to support decision making for well intervention techniques such as artificial lift, and automation that help operators change parameters remotely.

BloombergNEF calculates that the cost benefit to oil companies in the U.S. for optimizing existing unconventional oil production is $3.3 billion. This is particularly helpful for remote sites. In the U.S. it can take 4-8 hours for an engineer to drive to an oil field to inspect equipment – something digitalization can help eliminate.

In pilot on 22 assets, BP’s digital twin for onshore production has delivered 0.6% incremental to its production globally and reduced inspection costs by $200 million since 2016. Due to this performance, in 2018, BP added APEX to 1,000 assets in Alaska.

Offshore, the chances to reduce oil costs are even greater because of the higher cost of operations and dangerous work conditions. Equinor operates the world’s first unmanned offshore oil platform, Oseberg H. Equinor’s remote command center operates the platform from onshore. Automation and analytics helps provide a break-even cost of $20 per barrel. 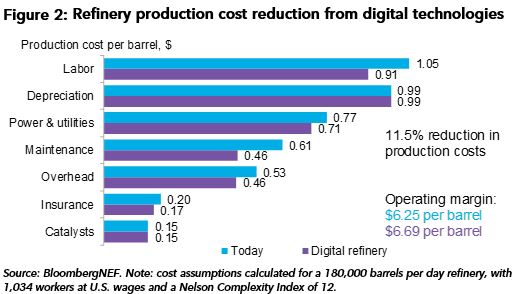 Oil refiners already have traditionally thin margins and have been less likely to adopt digitalization to date. However, we are seeing an increased use of connected sensors, IoT platforms, advanced analytics and even virtual and augmented reality. If an oil refinery producing 180,000 barrels a day were to adopt these technologies and digitalize, we calculate it could cut costs by $0.44 per barrel, or 11.5% of operational costs. Not all refineries will do this, depending on their age and regional differences. We calculate that of the refineries likely to adopt digitalization in the next few years, they could save $860 million in energy costs through machine learning algorithms. We calculate that yield optimization software in refineries could make an additional $1.75 billion, and asset maintenance analytics an additional $1 billion. These numbers could be much larger if all refineries digitalized but we believe most the older plants will not, while all new capacity will.

Because they can reduce the cost of existing operations, analytics like predictive maintenance and energy efficiency will be popular in the short term. As companies cut capital projects, digitalization will require retrofitting existing operations. During any period of low commodity prices, the size of the workforce in oil and gas tends to shrink. Remote monitoring and automation technologies now mean that oil fields can be operated by fewer people and algorithms can take over the work of certain technicians or supervisors. Depending on how long oil prices stay low, we would expect to see IoT technologies, virtual and augmented reality, drones and automation be sold as a way to combat high labor costs.