This article highlights the most interesting findings from the research our team undertook in 2017 on the topic of distributed energy in frontier markets.

Advances in distributed technologies at the frontiers of the energy system can provide power where the traditional grid is non-existent, inadequate, expensive or too distant for connection.

These technologies, and the innovative business models that deploy them, can deliver not just energy but also economic opportunities to the two billion people not reliably served by the energy industry today. But where exactly are the opportunities? Who are the leaders in the sector? Which markets are they likely to capture?

1. The largest solar deal in Africa this year was off the grid 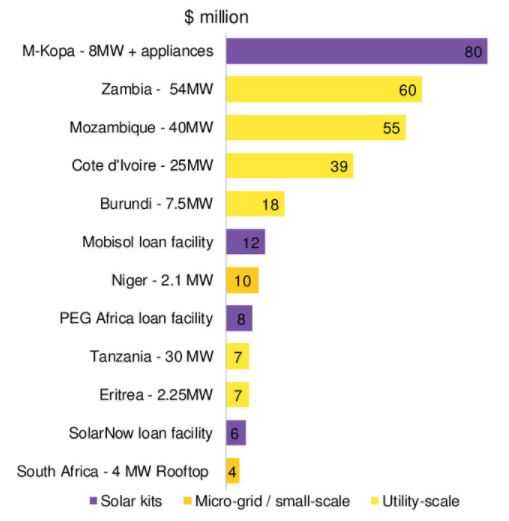 2. Distributed energy outside the OECD is a $40 billion industry

Diesel generators have long been the technology of choice in areas where reliable grid electricity is unavailable. In 2015, developing countries bought and installed about 600,000 units annually, totaling an estimated 29GW of capacity. About half of this is in units smaller than 0.3MW. There is a mature market and supply chain to sell, fuel and maintain this kit. Despite usually being competitive with diesel, solar currently has less than 3% of the market for distributed energy capacity in developing countries, but considerable potential.

Hybrid energy systems consisting of solar panels, a battery and a diesel generator are the cheapest way to run the world’s one million telecom towers that today have unreliable grid supplies. Telecoms and their suppliers spend around $3.8 billion on diesel for their towers today, but solar has a market share of only 3%. But the market is picking up. Orange is working with Engie on re-powering its towers in Senegal, Ivory Coast and Cameroon. Mitsui has invested $9 million in India’s OMC, a start-up focused on solar-power for telecoms.

4. Unexpected partnerships are seeking to power the next billion

In frontier markets, reaching the last mile is crucial. This is not just true for energy retailers, but for any retailer. Multinationals focused on telecoms, internet or satellite services, insurance and even beverages have all partnered with solar companies to benefit from a combination of energy, mobile connectivity, payment information and distribution channels. This is very different from the traditional utility business model.

Powering agriculture appears to be a missed opportunity. In India, the sector consumes just under a fifth of the electricity and an even larger share of electricity subsidies. The country could economically replace at least 8 million diesel-powered water pumps. Deployment of solar-powered water pumps has risen 270% over 2014-16, but still lags far behind the official ambitions. In Africa, the sector is even less developed. More broadly, agricultural processing powered by distributed energy could capture more value locally. It could also be easier to finance because it powers machines that produce revenue to the farmer and can service debt. Commodity companies that either buy produce from farmers or sell them fertilizer may be well positioned to run such projects.

These are only a few of the findings from the BNEF research team. To read all of them, download the full report now.