Greece can transform its power system away from heavy reliance on fossil fuels to potentially become one of the leaders of the energy transition in Europe by 2030, according to BloombergNEF’s (BNEF) Greece Market Outlook. Longer term, economics alone can drive Greece’s power sector to more than 90% renewable electricity by 2050.

BNEF maps a least-cost transition pathway for Greece’s power sector to 2050 — the first time BNEF has used its New Energy Outlook modeling to explore an economics-driven outlook for the country’s transition.

Today, some 70% of Greek electricity is generated from lignite, a low quality coal, and natural gas. The move away from these fossil fuels is accelerating, driven by the increasing competitiveness of renewables technologies. It is already more economic in Greece to source power from new onshore wind or utility-scale solar than build new lignite or gas, according to BNEF. New offshore wind is also expected to be competitive with fossil fuels as early as 2025.

Most importantly, it is also already cheaper to build a new wind or solar plant than to run existing lignite assets, thanks to falling renewables costs. By 2025, building new renewables also looks cheaper than running existing gas plants.

This suggests an aggressive phase-out of Greece’s lignite assets is cost effective on a dollar per megawatt hour basis. Responding to these emerging economics, Greece’s government announced a plan to close the country’s lignite assets by 2023, except for a final lignite unit currently under construction which will run until 2028. This timeline is already being accelerated by increasing pressure from rising carbon costs and air pollution regulations, with two lignite plants closing earlier than expected this summer.

In the least-cost scenario modeled by BNEF, renewables are well-placed to make up for lignite retirements, and renewables additions accelerate through 2025. Between now and 2030 Greece builds around 10 gigawatts total of new onshore wind and utility-scale solar capacity, tripling the size of Greece’s current wind and solar fleet. Onshore wind additions grow first, but by the end of the 2020s PV installations, both utility-scale and small-scale, take over. This reflects cheaper PV technology, as well as its role in meeting Greece’s summer daytime electricity demand peak. Between now and 2030, nearly 4 gigawatts of small-scale solar is added to homes and businesses, as consumers also take advantage of falling prices for solar technology. By 2050, wind and solar together reach 24 gigawatts, a fourfold increase from today.

Greece has begun to take advantage of the competitive economics of new renewables, with an auction program held over 2018-20 that is set to bring more than 2.5 gigawatts of new onshore wind and utility-scale PV online within the next few years. However, the growth that emerges in our least-cost modelling requires a step-change in capacity additions. Beyond expanding its auction program, Greece could benefit from the growing corporate interest in procuring renewable energy through power-purchase agreements. 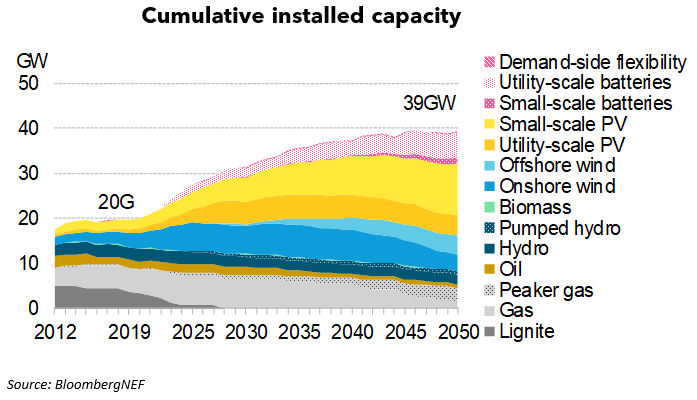 Between now and 2030, just two gigawatts of new gas capacity is built – which includes one combined-cycle plant of more than 800 megawatts already under construction. Despite interest from investors in adding new gas capacity to replace lignite, our analysis suggests that Greece doesn’t need new gas as a bridge to renewable energy. Around 800 megawatts of the gas capacity added over the next decade in our modelling is peaking plants, which are called upon for relatively few hours in the year when the sun is not shining and the wind is not blowing. However, these periods of low renewables output do not always justify new investment in large combined-cycle gas capacity. Instead, dedicated flexible capacity plants that are cheaper to build and run less are often more economic.

New flexible capacity presents more than a $2 billion investment opportunity through the decade to 2030 – with three quarters of this going to two gigawatts of utility-scale batteries that get deployed around the time when lignite capacity is scheduled to retire.

Longer term, renewables continue to rise and by 2050 the capacity mix is 83% variable wind and PV. From 2030, more than 6 gigawatts of utility-scale batteries are added through 2050, to shift excess wind and solar energy across a few days. Another 1.3 gigawatts of demand response supports renewables growth by shifting demand away from peak hours.

Greece is still in the early stages of developing storage technology, though its pumped hydro assets can be used for flexibility as a starting point. The launch of a full ancillary services market that would compensate highly flexible technologies such as lithium-ion batteries could accelerate that technology’s entry into the Greek power system.

A total of $33 billion needs to be invested in new electricity generating capacity in Greece from now to 2050, according to our Outlook. Some 92% of this goes to zero-carbon technologies. Around $14 billion is invested in new renewable generating capacity in the next ten years – more than double the $6.5 billion invested in clean energy in Greece over 2009-19. After 2030, small-scale and utility-scale batteries attract another $3 billion in new investment through 2050, as the most economic option for flexibility in a grid with growing renewables penetration. Thanks to its increasingly competitive economics and more stable generation profile, offshore wind is also a competitive option by the mid-2020s, and begins to attract investment over the next five years.

These investments average to just over $1 billion annually – not unprecedented sums for Greece. In 2017, the country saw more than $1 billion in new investment, mostly for onshore wind, and also reached $979 million in 2019. Clear policy targets and an enabling framework will be key to unlocking these volumes consistently in coming years. Greece’s 2030 targets, its lignite phase-out, and the streamlining of the permitting process for renewables are positive steps in this direction.

Greece will be able to benefit from funding from the European Union’s Green Recovery Plan, including the Just Transition Fund, which aims to ensure that regions with carbon-intensive economies are not left behind in the energy transition. Greece’s support of the EU’s goal of climate neutrality by 2050, and its coal phase-out plans, may help ensure the country has plans and projects that are eligible for EU support.

This also means the renewables sector is poised to play a key role in Greece’s recovery from the economic impacts of the Covid-19 pandemic. Sustainable growth in renewables offers the opportunity for new jobs in operations and maintenance – which can help alleviate the impact both of Covid-19 and of lignite phase-out. Offshore wind is also promising, offering opportunities for Greece to apply its considerable maritime experience to developing a new industry. 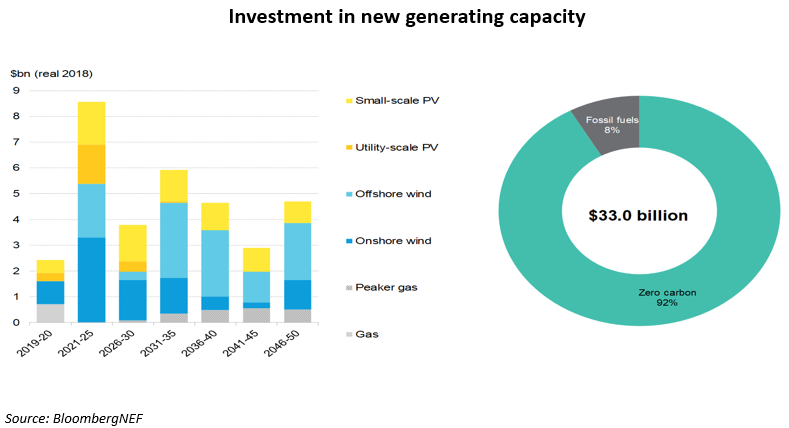 The $33 billion investment in power generation allows for a wholesale transformation of Greece’s generation mix, and helps Greece to exceed its 2030 renewables target. Already by 2025, renewables make up more than half of electricity generation, dominated by wind, and grow to 68% by 2030. The country’s latest targets aim for ‘at least’ 60% renewables in total electricity consumption by 2030. By 2050, renewables, including hydro, are by far the dominant technology in the power mix, producing 96% of Greece’s electricity. 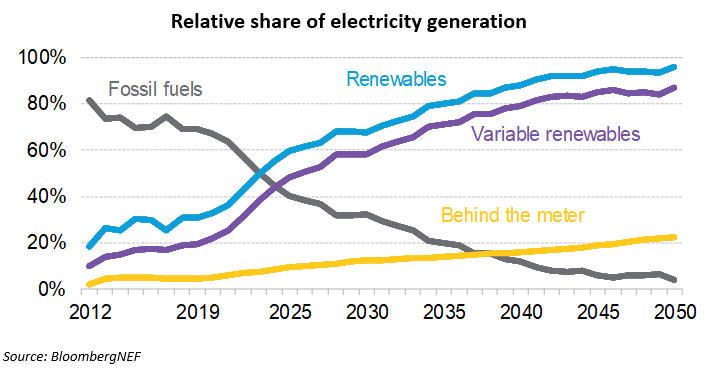 The model assumes very modest demand growth, based on efficiency gains and continued economic recovery from the 2009 debt crisis. The coronavirus pandemic may mean short-term power demand falls  further than in the modeled scenario, though long-term trends are likely to remain consistent with the results of the Outlook. However, Greece announced a plan in June to support electromobility, which will put upward pressure on future power demand and help reduce emissions in the transport sector.

Economics alone drive Greece’s power sector very close to net-zero by 2050. The surge in lower-cost renewables allows Greece to achieve remarkable emissions reductions for a country with one of the European Union’s dirtiest coal fleets. The power sector almost completely decarbonizes by 2050, with emissions down 98% from 2018 levels in that year. At the same time, the share of fossil-fuel generation falls continuously to around 4% by 2045 when emissions come solely from peaker gas plants providing system security and flexibility.