McCrone: Electricity demand – the blue whale in the room

As an eight year-old schoolboy, I learned that a judicious flick of a fountain pen can produce a lavish trail of dots of blue ink – done purely for artistic reasons, I assure you.

A grown-up version of this was tried by US artist Jackson Pollock during his “drip” period in the late 1940s. Little did Pollock (or I, in my ink-flicking days) know, but similar splodges of colour are, in 2015, telling an eloquent story about the world’s use of energy.

The chart produced by my colleague Tom Rowlands-Rees, head of Bloomberg New Energy Finance’s energy smart technologies team, shows how electricity demand unfolds by country, according to its stage of economic development. Not only that, but an extrapolation of that chart into the future gives a fascinating insight into how it might evolve country-by-country.

Future electricity demand is not so much the elephant in the room as the blue whale in the room. Energy policies around the world reflect forecasts of demand that draw heavily on conventional assumptions. If those forecasts turn out to be wrong by even one percentage point per year, then the difference over 25 years can be so enormous as to make a that country’s energy investment choices look misconceived and wasteful.

Just how much difference it can make was evident in the work we did last autumn on Turkey. Official plans assume that electricity demand will increase at an average rate of 5% per year between now and 2030, equal to a total increase of 142%.

Bloomberg New Energy Finance’s forecast, based on what has happened in other economies at a similar stage of development, by contrast, pointed to an increase in electricity consumption of 93%. The official plan implied the need for 97GW of additional power capacity by 2030, some 16GW of that being coal and 12GW nuclear; our alternative “Renewables Development Pathway” said that Turkey needs just 67GW of additional capacity, with 2GW of coal and 5GW of nuclear.

The fact is that electricity consumption patterns in recent times have caught policy-makers off guard. On the International Energy Agency’s data, electricity supplied in OECD countries in 2014 was 10,195TWh, some 0.4% down (yes, down) on its level in 2007. During that period, according to the OECD itself, economic growth in those countries totalled 6.3%.

Of course, within the OECD there were some countries suffering from the sovereign debt crisis and displaying very weak electricity demand in the period in question: Greece down 11% in 2007-14, Italy down 10% and Spain down 12%. But even the better economic performers have also been subdued in their demand for power: the US down 1% despite economic growth of 8%, Japan down 8% while the economy expanded 1%, Germany down 5% against a backdrop of GDP rising 5%, France down 3% while the economy has grown 2%, the UK down 13% against GDP growth of 4%, Canada up just under 1% despite an economy expanding 11%, and Australia down 4% despite strong economic growth of 19%.

Overall, OECD electricity demand dropped 6.3% relative to GDP between 2007 and 2014. One obvious possible reason could be offshoring of industrial activity to China and other low-cost centres.

This has certainly been a factor, but it is not the only one. In the UK, for instance, there was a 38TWh reduction in consumption of electricity in 2007-14, with the two main areas responsible being industries other than iron and steel (down 20TWh or 18%) and households (down 16TWh or 13%).

In Australia’s National Energy Market states , electricity supplied fell 4% between the 2007-08 financial year and 2013-14. Within this, consumption of grid electricity by households and the commercial sector fell by 9%. Some of this is due to fast growth in rooftop PV, but even adding all of that onto the household and commercial consumption figure would still give a demand drop of 6% for those sectors during a six-year period in which national GDP jumped by 16%.

Power prices are likely to have had an influence on demand patterns. In many of the countries where electricity consumption has been weak during this economic recovery, prices per kWh have been rising.

In the UK, household bills based on an assumption of constant kWh use increased from GBP 474 in 2010 to GBP 592 in 2014, a rise of 25%. Faced by that sort of increase, it would be surprising if consumers did not try to reduce usage – switching on electric heaters a bit less often (in the UK for instance, 22% of electricity is used for space heating), wearing another layer of clothing in the house in winter, or being more careful about how much water they put in the kettle.

But there is another important influence at work, and that is energy efficiency. Take energy-efficient lighting. LEDs are estimated to reduce electricity use by 50-80% in the case of city street lights. At a smaller scale, the US Department of Energy cites the electricity saved by switching to a 15W halogen compact fluorescent bulb from a 60W incandescent as 75%.

In the UK, the number of bulbs per household has increased from 23 at the turn of the Millennium, to 26 now, but standard light bulbs have gone from a dominant market share to a very small share, and average household electricity demand for lighting has plunged from more than 700kWh to less than 500kWh per year.

In IT, the electricity used per trillion computations has been on steep decline since the 1940s, and in the last 25 years has fallen from 1kWh to just a thousandth of a kWh. An important reason for this trend is that packing extra processing power into a smaller area runs to intractable problems of overheating – unless the components become more and more energy-efficient.

This takes us back to Rowlands-Rees’ splatter-of-ink electricity consumption chart. Figure 1 shows the relationship between GDP per capita in different countries over 1980-2012, and electricity consumption per dollar of GDP. Outcomes vary. For instance, Canada and the US have had higher electricity use per unit of GDP than Europe, the Middle East has always been well on the high side and so, to a somewhat lesser extent, has China. Japan has moved from the centre of the trend line to well below centre. However, there is a fairly clear pattern.

The question is whether this pattern is static over time – in which case we can expect economies such as India and Indonesia to follow roughly the same path as China, and South America to follow the same one as North America – or whether it is itself evolving.

The work that our energy smart technologies team has done suggests that the trend lines are moving down (Figure 2). There is still a peak in electricity use per unit of GDP, but this is shifting from the point when an economy delivers about $2,000 of GDP per capita in 2002, to more like $8,000 now (expressed in 2009 currency). The peak is also much lower in terms of kWh than it used to be, and so is the overall level of consumption as GDP rises towards $100,000 per capita.

If our calculations are borne out by events, then the march of efficiency technologies and changes in consumer fashions are going to mean that electricity consumption continues to undershoot consensus expectations around the world in the next decade or two. 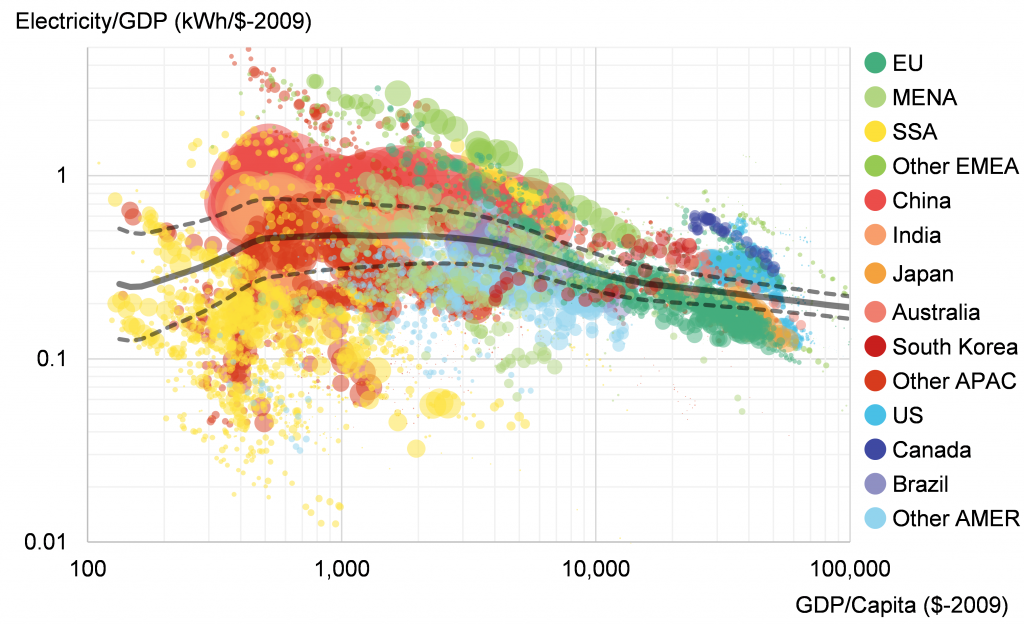 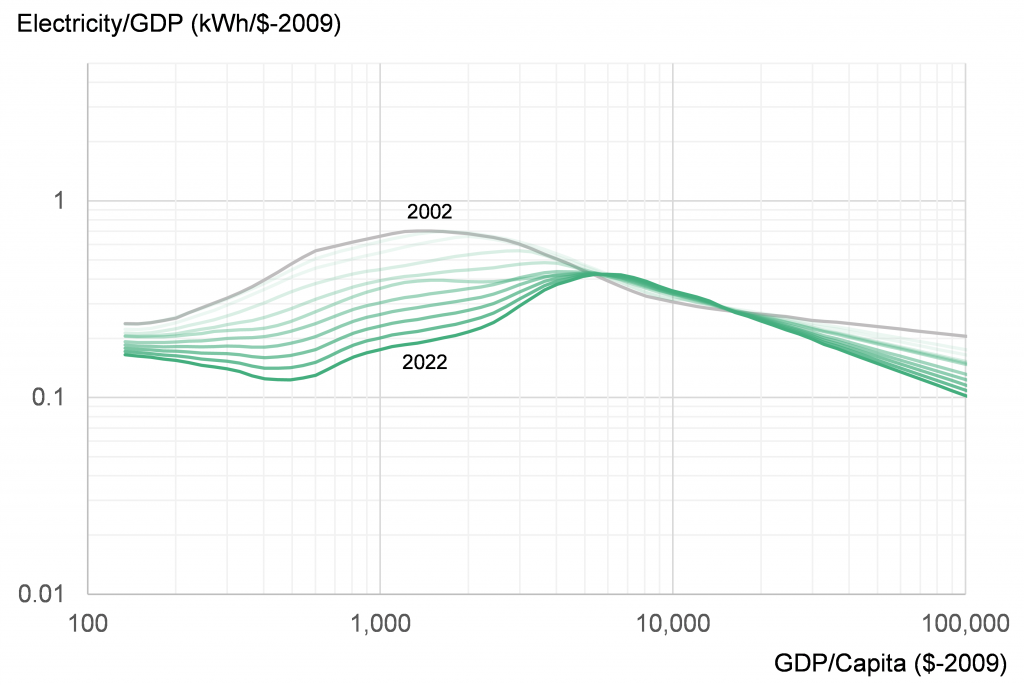 This will be a big influence on Bloomberg New Energy Finance’s annual forecast on the future of energy to 2040, due to be published next month.

Other forecasting organisations do not see the electricity demand trend in quite the same way. The IEA, in its World Energy Outlook 2014, published last November, showed electricity generation worldwide increasing at a 2.1% annual rate between 2012 and 2040, after a 3% rate of expansion in 1990-2012. This is almost exactly in line with ExxonMobil, which in its 2015 Outlook for Energy predicted an 85% jump in global electricity demand globally by 2040, “as living standards rise, economies expand and the electrification of society continues”.

They could be right, and BNEF wrong, if the recent period of reductions in power demand per unit of GDP proves to be a blip. That blip could plausibly have been the result of two things: the unusually fast arrival of efficiency technologies and the unusually slow economic growth after the 2008 world financial crisis.

It is not a bad argument, but I think there is more going on than that. There are strong underlying trends in efficiency affecting products such as those in IT, refrigeration and air conditioning. There is a series of step-changes going on in lighting.

There is also the impact of more intelligent devices and, soon, the connected home. Already, a modern fridge will make an unpleasant noise if its door is left open. Some of the latest dishwashers allow users to hit a “four-hour delay” button that insures that it runs at midnight, not 8pm and that it takes advantage of the cheapest possible power. The relatively low price of modern electronic goods makes it an easy decision for consumers to replace them with newer, more efficient ones – we no longer live in a world where we expect to keep our record player for 25 years.

In the near future, space heating systems and air conditioners will automatically set a different temperature depending on whether the house or office is occupied or not, televisions will switch off if no one has been in the room for five minutes, the last of those brutal, old two-bar electric fires will finally be consigned to the scrap yard in favour of something much more efficient and responsive to changing conditions. Improved building design and materials will also reduce residential energy use.

The wild cards, of course, are electric vehicles and heat pumps. Sudden explosive growth in those markets could throw forecasts off balance, and change the demand trend, although it would have to be spectacular indeed and even then they are starting from such a low base that it might not make much difference this decade.

One final thought: the weaker-than-expected trends in electricity demand described above will be in the back of the minds of some of the parties negotiating in the run-up to the Paris climate change conference in December. They will provide hope that it may well be possible to avert the worst scenarios of global warming. But softer global electricity demand growth will not be enough, on its own, to prevent world temperatures rising by more than two degrees Centigrade.

Even if global emissions were to stop rising right now, the amount CO2 in the atmosphere is on track to rise from around 400 parts per million to 450 within 20 or so years. That is the CO2 share that the IEA says would give the world a greater-than-50% chance of limiting temperature increases to less than two degrees Centigrade. Despite the “blue whale in the room” of slower-than-expected electricity demand growth, stabilising the CO2 in the atmosphere will require action on many other fronts.

How much difference to the trend could EVs make?

On one estimate, by the Royal Academy of Engineering in 2010, EVs equivalent to a small petrol or diesel four-seat car use around 0.2 kWh per kilometre in normal city traffic. If the average vehicle travels 15,000km in a year, and battery EVs amount to three million worldwide by 2020 (just over 10 times the level of new EV sales in 2014), then that would be 9TWh of consumption in that year. That would be equivalent to just 0.04% of the IEA’s figure for world electricity generation in 2012, of 22,721TWh.

Liebreich: The Quest for Resilience – What Could Possibly Go Wrong?